The Leaked Kamala Harris Vogue Cover: Where Do We Draw the Line Between Celebrity and Politician? 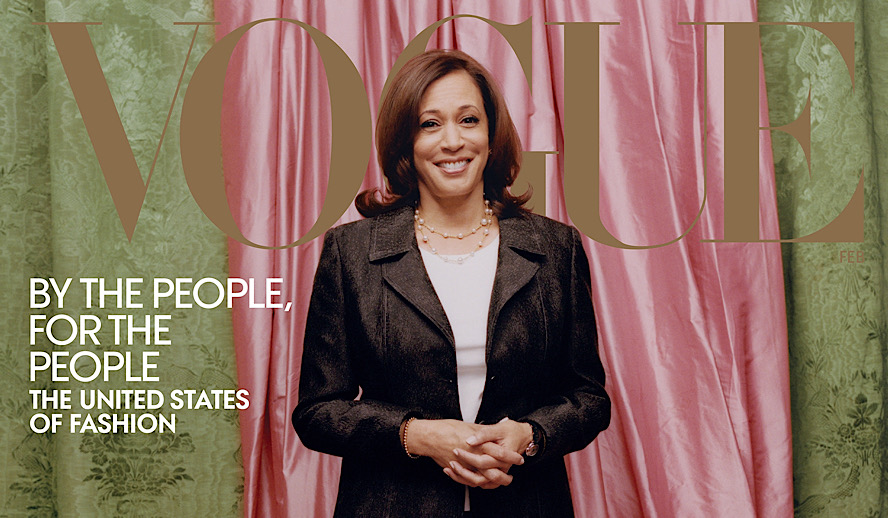 On January 10th, 2021, Vogue posted a photo of their February cover to Instagram. The cover featured Vice President-elect, Kamala Harris, against a green and pink background wearing a black suit and, controversially, Chuck Taylor converse. The cover received immediate backlash on platforms like Twitter, from angry followers who were convinced that Kamala Harris’ cover was a blatant sign of misrepresentation. Many accused Vogue of diminishing black women on their covers, comparing it to the Simon Biles’ cover from a few years ago. Criticisms of the cover range from the lighting being unflattering to the casual shoes Harris is pictured as being labeled disrespectful.

Kamala Harris Vogue Cover – The Context for the Controversial Cover

The cover was photographed by Tyler Mitchell, a twenty-six-year-old black photographer who made history in 2018 as the first African-American to shoot a Vogue cover. This gives some important context to the criticisms of the cover, which feel uninformed and reactionary. To give some background, I’d like to briefly review a few other Vogue covers that I think are of note in this situation. For example, First Lady Michelle Obama was photographed for the cover of Vogue three times during the Obama administration.

On each cover, Obama is dressed smartly and professionally, in contrast to typical Vogue covers, which tend to feature highly stylized design choices along with a high-fashion focus (emphasis on designer brands, etc). She is photographed with a relatively simple background, appearing outside in nature and inside a comfortable, homely setting. Serena Williams is another black Vogue cover star who appeared on the iconic cover in a relatively plain way compared to others. She is seen in a blue dress with a light blue background and simple makeup.

Perspective Through the Lens of Celebrity vs. Public Figure

In comparison to the typical, stylized images that we see on the cover of Vogue, these covers are plainer and simpler in form. There’s no question about that. However, as many people have been attributing this simplicity to racial motivations, I’d like to take a step back and examine the situation through a different lens. Before I get into it, however, I’d like to take a moment to acknowledge that there are definitely valid concerns about black representation in the Kamala Harris cover criticisms; such as the proliferation that black women are not treated with the same regard that white women are when it comes to representation in fashion.

This is something that I agree with completely. There is definitely an issue with how black women are and have been represented on magazine covers. But, that argument specifically is not what I’m choosing to focus on in my analysis of this controversy. I would like to, instead, use this Vogue cover as an opportunity to dissect the shrinking dissonance between politicians and celebrities, as well as how the two groups are represented in the media.

Social Media Allows for More Connection Than Ever Before

With growing online communities surrounding social media, our favorite celebrities have become accessible in a way they never have been before. Platforms like Instagram and Twitter allow our idols to post in a way that feels like they’re communicating to us directly through the caption of a photo or a tweet. Given that political figures have always been inherently accessible to the public, it is part of their job, after all, social media has allowed for them too to connect with followers on an even more direct basis. We can see the implications of this in situations like Alexandria Ocasio-Cortez live streaming on Twitch while playing the popular game “Among Us” with followers. Here, she used her livestream as an opportunity to display her accessibility and, in a sense, relatability. This was the perfect opportunity to not only interact with her followers but to broadcast those interactions to the entire internet.

The Good and Bad Consequences of The Interconnected Celebrity-Politician

Situations like this show an interesting turn in the way we interact with and view politicians. In the past, politicians were reserved and private about their personal lives while operating under the guise of openness in order to appeal to the public. With social media, there is no longer a guise to operate under. If you are a politician, you exist in the public eye. No questions asked. This new openness in how we view the leaders of our nation has both good and bad consequences. For example, it forces our elected officials to be on their best behavior at all times, allowing us, as the public, to vet those who are eventually proven unworthy. Just look at the Rudy Giuliani scene in the new ‘Borat’ film. We, for the first time in our history, are allowed an unbiased and intimate look at the public figures who are serving our country.

However, this social media accessibility has downsides too, the entire Trump presidency being one of them. Donald Trump, as most Americans know, started as a businessman before morphing his success into a celebrity story and using his status to gain standing in the public eye. During his campaign in 2016, he was one of the few nominees to openly communicate with the public via his social media, thus creating an illusion of accessibility while bridging his position as a celebrity with his political interests. This, arguably, gave him an edge over the Democratic nominee, Hillary Clinton. One of the most common complaints about Clinton during this campaign was her “fakeness”. She came across as a studied, ingenuine, and typical politician who was out-of-touch with the needs of America.

After Trump was elected, his political followers employed interesting tactics to show their support for him, likely a lingering result of his status as a celebrity before the election. For example, Trump car parades with overt flags and propaganda of support became a frequent sighting in most places across America, even places with a Democratic majority. Trump supporters became a hyperbolic representation of an adoring fanbase; similar to the unconditional fans of celebrities that we see every day in popular culture. Trump, by combining his celebrity status and his political interests, turned his political followers into the likes of relentless teenage girls obsessing over a heartthrob. People who follow his every command, no matter how many lies he continues to tell, just take the recent Capitol riots as an example of this phenomenon.

Back to the Vogue Cover

So what does any of this have to do with the Kamala Harris Vogue cover, you may ask? Well, the Vogue cover, traditionally speaking, has been a place for celebrities to affirm and preserve their popularity at a certain moment in time. It has not necessarily been a place for politicians or athletes to gather followers. But as society evolves, so does Vogue, and with the advent of social media, the lines between politician and celebrity continue to blur.

By portraying Kamala Harris in a simple black suit wearing converse on the cover of the most influential fashion magazine in the world, Vogue is unsuccessfully trying to remind its audience that there is a difference between celebrity and politician; a difference that should be emphasized in how the two are displayed to the public. Though I do think that Vogue could’ve employed a little bit more finesse or taste with the way they dressed Harris, it’s important to understand the canon that led them to this decision. Politicians, at the end of the day, are not celebrities. They are public figures, but the difference is that politicians are elected officials who serve the people. Celebrities are caricatures of the average person who develop fanbases. We should not have politicians with fanbases, we should have politicians with followers and supporters. There’s a difference. One offers unconditional support, the other agrees with their political sentiments and legislation.

To wrap up, I want to say that I agree with the differences that Vogue uses to showcase political figures, athletes, etc. from models and celebrities. It is important to recognize the difference between public figures who are elected to serve the people versus celebrities with private agendas to push on us. However, in the specific case of Kamala Harris’ cover, I think Vogue could have communicated this message with more taste and sensitivity, as well as better lighting. Overall, without a strict line between celebrity and politician, there can be disastrous consequences.