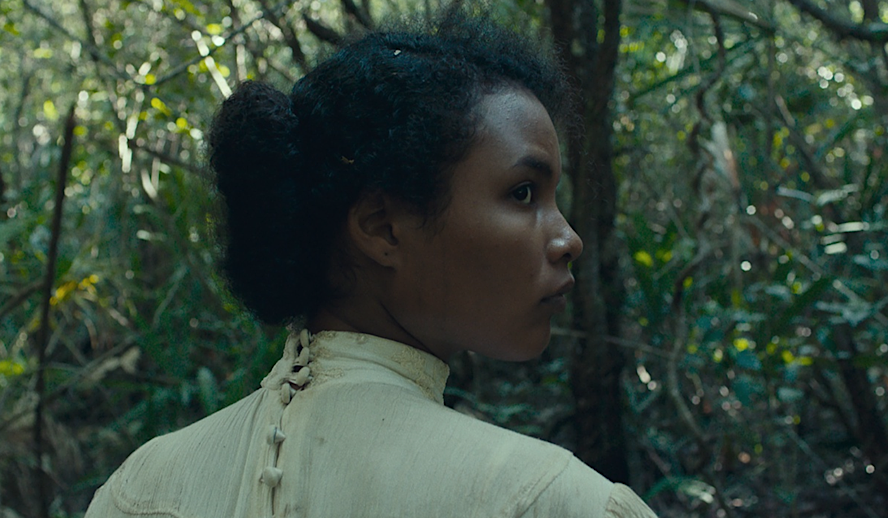 A recent arrival on Netflix is the Mexican drama-thriller from director Yulene Olaizola, ‘Tragic Jungle’. The film follows Indira Rubie Andrewin as Agnes, an arranged bride, flees her arranged wedding into the Mayan jungle while pursued by her cruel fiancee, portrayed by Dale Carley. In her escape, Agnes stumbles upon a group of men harvesting gum and soon the forces of nature, human beings, and the supernatural all come to a head. The film enjoyed a successful international film festival run in 2020 and looks to have the same reaction from audiences as it releases wide on the world’s largest streaming platform.

‘Tragic Jungle’ is a very interesting film — the film has a very slow, methodical pace to it which creates a very eerie atmosphere. While the film does delve into folklore and the fantastical at times, the filmmakers create an inherent sense of realism with the direction of the film which when compounded with the excellent sound editing creates an impressive amount of tension despite the film’s plot taking its time in parts. Pairing this tension with sparse but effective moments of violence and great performances, ‘Tragic Jungle’ is a film that surprised and impressed me.

In terms of what worked for the film, a great place to start is the cast. Indira Rubie Andrewin in the role of Agnes is very compelling and intriguing. She performs that character with a quiet innocence that slowly seeps away as the film progresses which was very effective. The film employs a fairly large ensemble of characters and each gives memorable and specific performances. In a large cast such as this, it would be easy for characters to slip into the background, however, the actors each maintain a presence even if they are not speaking. A few key performances worth highlighting outside of Andrewin would be Gilberto Barraza as Auscencio who gives a haunting performance as well as Mariano Tun Xool as Jacinto and Gabino Rodríguez as El Caimán.

From a technical standpoint, the film is very well constructed. How they created the feeling and atmosphere of the jungle was incredibly well done. The filmmakers implored very dense soundscapes to combine all the sounds of the jungle that was exceptionally effective reminding me of such films as the Daniel Radcliffe starring ‘Jungle’, Steven Spielberg’s classic ‘Jurassic Park’ that starred Sam Neil, Laura Dern, and Jeff Goldblum, and of course Disney and Jon Favreau’s ‘The Jungle Book’. Specifically, the sequences in the rain had me smiling from ear to ear as the audio mastery on display. There is a great use of real animals in the film which was also much appreciated.

So often do we see films such as the most recent ‘The Lion King’, that utilized the voices of Seth Rogan and Donald Glover, and the Harrison Ford starring ‘Call of the Wild’ use VFX to create computer-generated animals; to see a film stick to mostly practical effects was welcomed. This practicality also applies to the lush shoot locations chosen for the film. The cinematography by Sofia Oggioni was also top-notch. Oggioni does a great job of shooting the vastness of the jungle while also making it feel claustrophobic and dense. There were several shots having to do with scaling a tree that I thought were very impressive and had me pondering the difficulty and prowess in which it took to pull those shots off. The score by Alejandro Otaola was another element of the film that helped boost the tension.

A huge credit to the film is the story that it tells and how it goes about telling it. While other films may take time to set up their story, ‘Tragic Jungle’ opts to drop you right into the action of the plot which works tremendously. Instead of getting bogged down in the weeds of exposition, the filmmakers chose to show and not tell, delivering the exposition through efficient visuals. The film takes inspiration from a Mayan legend, something that is explained through a voice-over by one of the characters, which is one of the more interesting elements of the film. While the technique of utilizing voice-over could feel out of place with the other visual storytelling, it luckily does not. The legend that is explained over the course of the film is one that plays very well into the story in a very cool and unexpected way.

The characters in the film are all written very simply, however, this does not distract from their impact and effectiveness. There is a descent into darkness for a lot of these characters that is very well done and perfectly ties in with the film’s overall thematics. One element of the film that I appreciated greatly is the use of languages — in the film, there are both English and Spanish-speaking characters which both heightens the realism of the film and creates tension between these two groups which was an intelligent writing tactic.

Often films will commit to one language for general marketing reasons to have their film have a wider audience, however, it does not fail to be odd to have characters that should be speaking their native language speak English. This film allows for each character to speak their native language making the film feel all the more real.

‘Tragic Jungle’ is a very effective, smart film that’s slow-burn style does not hinder its pace nor the tension produced. Expertly crafted and well-directed, the film found many ways to impress me. No film is perfect and while there could be flaws picked out, there is nothing glaring enough for me to want to dedicate extended time criticizing it. If I had to name a particular flaw, there is a scene that depicts sexual violence that may have not been completely necessary.

I understand why it was in the film, however, there were probably other ways to get that intention across — also, be sure to be aware that the film does have this depiction ahead of time as it may be triggering. Other than that, sometimes there is no reason to speak negatively about a film other than to complain about your personal nitpicks — so I won’t.

Check out ‘Tragic Jungle’ on Netflix today. Be on the lookout for Netflix’s next release ‘Wish Dragon’ releasing June 11th.