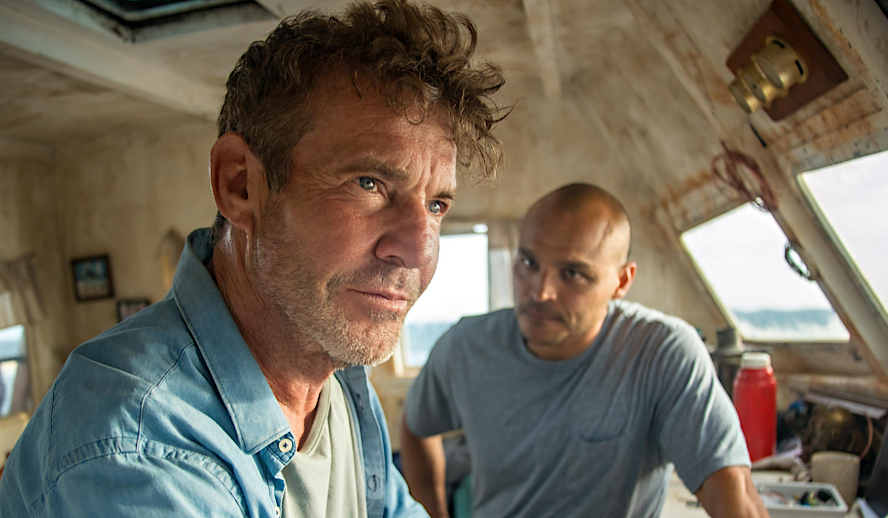 From director Julio Quintana comes Netflix’s newest drama, ‘Blue Miracle’. Based on a true story, the film follows Omar, played by Jimmy Gonzales, who runs an orphanage in Mexico that is on the brink of financial ruin. In an effort to save the orphanage, Omar teams up with Wade, a washed-up fisherman in the area played by Dennis Quaid, to win a lucrative fishing competition. The team takes on both the sea and their own personal demons as they try to save the orphanage for the children that rely on it.

‘Blue Miracle’ is a film that is filled with heart and good intentions, even though some of those intentions fall short of the mark. With strengths coming from its top-notch cinematography and strong performances from its leads, ‘Blue Miracle’ looks to offer a pleasant and compelling character story that is easily digestible. However, that ease of watch does sometimes preclude the film from going deeper on issues and topics that arise throughout its runtime, glossing over some important topics that could have been given more attention.

The strength of the film lies first and foremost with its cast — Jimmy Gonzales, who also appeared in ‘Godzilla: King of Monsters’ alongside Kyle Chandler, Millie Bobby Brown, and Vera Farmiga, who is excellent in the role of Omar. The character’s traumatic past is perfectly balanced with his new, hopeful outlook in Gonzales’ performance. His character is particularly well written and provided a very endearing lead to the film. Dennis Quaid, of ‘Any Given Sunday’ in which he starred alongside Jamie Foxx and Al Pacino, provides one of the most dynamic performances in the film offering a take of a dead-beat fisherman past his prime.

The film offers a deeper, more emotional element to his character that was unexpected but welcome. Quaid is a scene-stealer and has some of the best moments of the film with his enigmatic performance. All of this is paired with some great child actor performances as well as a brief appearance from Raymond Cruz, who portrayed Tuco on ‘Breaking Bad’ opposite Bryan Cranston and Aaron Paul, to create a stellar cast.

On a technical level, the film exceeds expectations having very great cinematography. The opening shot of the film is nothing short of beautiful — this carries into and throughout the film. The film does a great job of keeping the actor in the center of the camera to create a cool stylistic aesthetic to the way the film is shot. There are a few really cool transitions particularly one with water and a bed. These transitions quickly caught my attention and I’m sure were a particularly tall task to make work in the editing room however here they work seamlessly.

The editing as a whole is very impressive, cuts know when to linger and when to keep the pace moving allowing for the film to feel very easy-breezy throughout. The score is another plus in this film as it allows to guide the viewer on both the emotion of the film as well as the overall tone and feel. The writing as a whole kept me engaged in the story — the characters are quickly endearing and easily identifiable in their plight which makes them very easy to root for. The film definitely has a good handle on what it wants to be, a fun family drama, and it succeeds in that even if it could have touched deeper on some more adult themes.

As previously mentioned, the film knows what it is — this will work for some audiences however it will also let down others. The film is fairly conventional in its plot and even though it is based on a true story, this feels like a story I have seen before and one that I will most likely see again. Never during my watch was I genuinely surprised by a plot development or reveal as most were incredibly broadcast ahead of their inclusion.

This was disappointing because of how much I enjoyed the overall premise and the characters. Allowing for these characters to interact in a less conventional plot structure could have aided the film’s watchability overall. Understanding that the filmmakers may have had their hands tied by the source material, this is a forgivable misstep but one that should be noted nonetheless.

The other major issue with the film I found myself finding is that the film is very superficial when tackling deeper and darker issues. The film touches on the state of youth living on the streets of Mexico, police brutality, and other more adult issues but only skims over them. While it may have been a little out of place tonally if these issues were attacked in a less superficial way they could have really become compelling.

As is, some of the lessons of the film feel like an overly simplified solution to complex problems such as maintaining morality when you are living on the streets. It all came across as sort of “easy for us to say”, when in all actuality these situations are very complex and nuanced in real life. I’m glad the film had the courage to bring up these issues at all and it was without a doubt all well-intentioned, but sometimes it just fell short of the mark.

‘Blue Miracle’ is a very easy and enjoyable watch — frequently throughout the film, I found myself smiling, endeared by the characters, and rooting for them to succeed in this fishing contest to save their home. The performances of the film headline and elevate the movie as a whole, specifically that of Jimmy Gonzales and Dennis Quaid.

While some content of the film will feel very conventional and some subject matter will feel oversimplified and glossed over, the film’s intentions are clear and that is commendable and worth the watch in itself. For those looking for a crowd-pleasing, fun watch, ‘Blue Miracle’ is worth your time just be sure to manage expectations going into it.

Watch ‘Blue Miracle’ on Netflix today. See Jimmy Gonzales in the most recent entry into ‘The Conjuring’ franchise in ‘The Conjuring: The Devil Made Me Do It’ releasing June 4th. Catch Dennis Quaid portraying president Ronald Reagan in ‘Reagan’ currently filming.