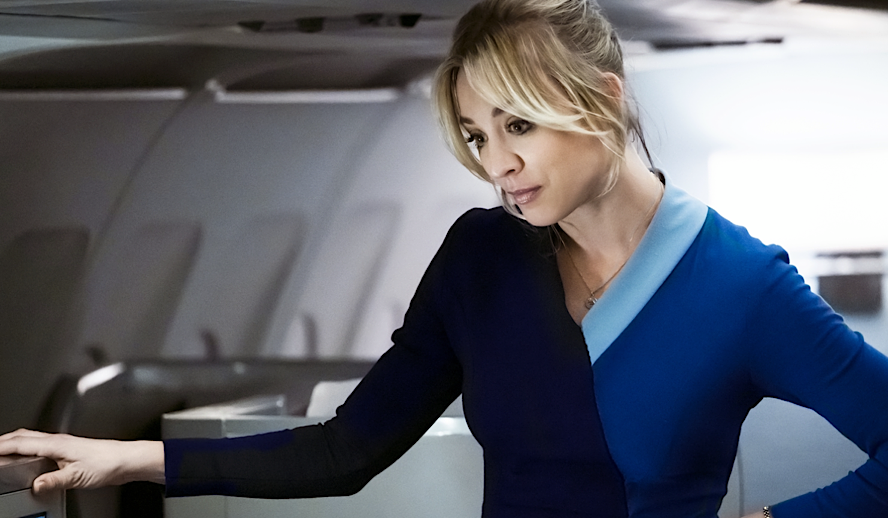 When waist-deep in a global pandemic in which each dwindling day of Autumn reminds us of the coming Winter and is mirrored in daily peak in cases of infection, there is no better source of serotonin than locking your doors, hiding under a pile of weighted blankets, and losing yourself in an addictive TV show for a few days. Fortunately, HBO Max has us covered with the release of its newest original series, The Flight Attendant. The only thing more binge-worthy than a mystery series, is a mystery series with an outlandish gimmick and lovable stars. The Flight Attendant checks off all these boxes and more as the comedic thriller involves unlikely protagonist, Kaley Cuoco, starting her night with a one-night stand waking up to a murder scene. Although there are several gripping mystery series, like HBO’s The Undoing, and many outrageous comedy shows, like Showtime’s Moonbase 8, that are currently airing and ripe for watching, there are very few series tenacious enough to morph the thriller and comedy genre into one.

Related article: ‘Moonbase 8’: A Must-Watch for Any Fans of Space, Comedy, or Simply Quality Television

Related article: ‘The Undoing’: A Bold Side of Nicole Kidman in HBO’s Newest Suspense Drama

From the mind of Steve Yockey, a writer, and producer whose experience on the shows Supernatural, Scream: The TV Series, and Awkward. effectively conveys the genre-bending nature of the series, The Flight Attendant is born. With only the first three of eight episodes available at takeoff on HBO Max, the mystery of the murder remains afoot; however, the trio of episodes is more than enough to resolve the series as a success. The Flight Attendant boasts an impressive supporting cast to Cuoco’s lead, including The Haunting of Hill House’s Michiel Huisman, Girls’s Zosia Mamet, and beloved national treasure Rosie Perez. The cast brilliantly unites with Yockey’s thrilling but clever tonal expertise and delivers a show with the perfect amount of comedy and intrigue to keep audiences glued to their screens from beginning to end.

Hilarity, Horror, and Hazard Make Up ‘The Flight Attendant’

Although audiences may not expect much grit from the harmlessly titled, The Flight Attendant, the beautifully cinematic James Bond-inspired intro sequence is an accurate representation of the show’s spirit. Action, romance, and peril lie around every corner of Cassie’s journey from airport to crime scene. The thriller element of The Flight Attendant is dense, as more clues only lead to more mystery, and the audience is tasked with the enormous challenge of settling into a show in which nothing is as it appears. With gorey special effects, rousing action sequences, and endless intrigue, The Flight Attendant swiftly and decisively cements itself into the thriller genre.

In addition to excelling in the suspense category, the HBO Max original series paves a path of its own with its impressively hilarious comedic chops, largely due in part to the show’s lead. The flying force behind the exceptional entertainment value of The Flight Attendant is undoubtedly Kaley Cuoco’s performance as part-time flight attendant, full-time party girl Cassie Bowden. While Cuoco’s unparalleled run as comedic relief on the smash-hit sitcom The Big Bang Theory proved the star’s comic ability, The Flight Attendant unleashes all of the potential Cuoco has held dormant to carry a show as the protagonist. A hero unlike most, Cassie finds herself forced to face the demons she has successfully buried under drunk nights out and love affairs when her reckless behavior lands her in the middle of a brutal crime scene.

The comedy is found in Cassie’s relatable and clever personality exemplified right off the bat when the flight attendant cheekily brags about her professionalism before taking a shot and partaking in a rendezvous with one of her passengers in the airplane bathroom. Cassie’s bubbly, quippy personality shines brightest when contrasted against the deadpan humor of Zosia Mamet’s Annie, Cassie’s logically minded lawyer best friend. The viewer truly finds themselves engrossed with Cuoco’s charming performance when Cassie finds herself relying on her charisma to work her way out of an unraveling and unpredictable murder investigation.

Although Cuoco’s performance in The Flight Attendant is unlike any of the star’s roles to date, the nimble, provocative, and elusive aspects of Cassie’s character all fall in line with a trope not unfamiliar to lovers of the mysterious film noir genre. The femme fatale is a character type vital to the intrigue of suspense films of the noir style and is defined by a woman who is as captivating as she is erratic and treacherous in nature. Classic examples of the femme fatale are found in Faye Dunaway’s character in Chinatown and Sharon Stone’s in Basic Instinct, but the trope has lived on in modern feminine roles like Anne Hathaway’s Catwoman and Rosamund Pike’s unsettling performance in Gone Girl.

Cuoco’s Cassie hits all of these traditional beats, down to the chic 50’s inspired fashion she effortlessly sports; however, The Flight Attendant is revolutionary in its portrayal of the femme fatale trope as it places Cassie as the hero of her story. In all previous iterations of the femme fatale, the threat of the feminine character is always presented as the core function of the character, often disregarding her humanity. The Flight Attendant features Cassie, with all of her customarily villainous traits, as the protagonist, and breaks down the myth that a complex woman is one that must not be empowered.

One way in which The Flight Attendant breaks down Cassie’s intricate character and makes her mysterious side an approachable one is through creative storytelling devices utilized by Yockey. There are several sequences in which Cassie is taken out of reality in the form of stress-induced hallucinations. The audience is given a rare insight into the psychological workings of a duplicitous heroine as these internal dialogues exhibit the emotional toll fleeing a murder scene takes on Cassie, just as it would any person. Cassie is further humanized in The Flight Attendant’s use of flashback, which often disrupts the story as the pressure of the murder triggers memories of earlier trauma relating to her childhood. The flashbacks are a clever technique on the part of Yockey as they reveal both Cassie’s mysterious past in a suspenseful manner as well as convey the human hardships she is struggling through. Cassie’s rumination simultaneously terrorizes and humanizes her character for an audience that has grown accustomed to disregarding the emotions that reside within the femme fatale.

Finally, The Flight Attendant’s exploration of Cassie’s substance abuse and reckless behavior conveys the series’s dedication to portraying their protagonist as a fully formed, 3-dimensional human. In all other contexts, the recklessness of a femme fatale is emphasized as a means to express the character’s threat to the man. The Flight Attendant displays Cassie’s troubling behavior in a compassionate and realistic manner as it is explained to the audience to be a result of traumatic experiences, not a fatal flaw.

In The Flight Attendant, Cassie’s thoughtless actions and her alcohol abuse are much more a threat to the wellbeing of her own safety, rather than the safety of the male protagonist as noir films would typically share. The understanding and humanization of Cassie’s character allows for the issue of substance abuse to be taken seriously and be dealt with with the compassion necessary to tell a story that involves such a salient theme. The Flight Attendant is unlike any other mystery story beyond its masterful blend of horror and humor, but for its redefining of women’s roles in the classically restrictive genre.