The Impact Netflix’s ‘Stranger Things’ Made in Pop Culture 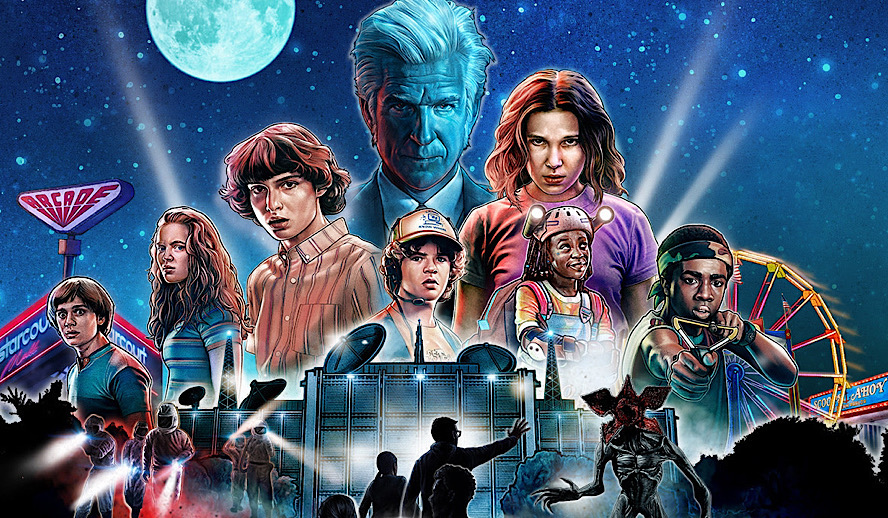 Netflix’s ‘Stranger Things’ debuted on July 15, 2016, and to put things in perspective, I was 15 years old and now the series is on its fourth season and I’m 21 years old, therefore, I’ve seen the impact this series has made on pop culture. I remember this show being marketed as Netflix’s newest original show as the company was increasing its original content, people were already invested in the show because of 80s nostalgia. This is before Hollywood got a grasp on selling us back nostalgia repeatedly so this show was an instant watch for many people and the thing that convinced me to watch it was the horror aspect of it. As a teenager, I loved supernatural elements including the show ‘Supernatural’ so when I saw that a character was trapped in another dimension while a group of kids are working with a girl “not from our world” to save him had similar vibes to Steven Spielberg’s ‘E.T. The Extra-Terrestrial’ and Stephen King’s book ‘It’ which coincidentally both came out in the 80s, I was drawn in to watch.

Chapter One: ‘Stranger Things’ Is Going Down In Television History

When I think about my generation who is Gen Z, I wonder what shows and music will define us and I think ‘Stranger Things’ is going to be one of those shows that people talk about and reference for years. However, it can honestly depend on how the show ends because shows have messed up their perfect run by having a flat ending. The show has iconic imagery like going back to season one with Eleven (Millie Bobby Brown) and her Eggo waffles and her pink dress, so when Halloween came around everyone was dressed like her and the other kids from the show. Also, everyone was surprised when they found out that Brown shaved her head for the role because in our society a woman’s hair means a lot. The creators of the show, The Duffer Brothers, really made people tap into their childhood and reminisce about the days when you would go over to your friend’s house and play and just be a kid.

People are also going to remember how the kids on the show grew up into young adults in the final season. I read rumors that the final season might have a time skip due to the actors being in their young twenties now and I think it will be a good idea if this season has a conclusive ending. I was reminded this season that I’m not that much older than the main kid group from the show. For example, the actor that plays Lucas, Caleb McLaughlin, is 20 years old, making me one year older than him.

Time is mind-bending to me because when I look back on season one, the cast looks like babies to me but in reality, I was growing up alongside the actors in real life. I know the show is currently getting criticism because the actors are young adults playing high schoolers but in my opinion, Hollywood has always had young adults play teenagers so it’s not distracting me. When the show ends, my generation is going to look back and appreciate that they had a show they followed into adulthood and watch it back because of the nostalgia factor.

The series has attracted record-breaking viewership on the streaming service and has received critical acclaim for its directing, writing, soundtrack, atmosphere, characterization, and homages to 1980s films. Now, did ‘Stranger Things’ bring back 80s fashion? Not really when it comes to clothes, I say my generation is confused when it comes to fashion because we have so many trends and things go in and out of fashion quickly so it’s best for you to find your own unique style and rock it! However, when it comes to hairstyles no matter the gender, people want to bring back mullets and if you can pull it off, go for them. The show is also known for its music and making it a trend again, thanks to TikTok. It doesn’t matter if you watch the show, if you’re a regular user on TikTok, you’ve been hearing ‘Running Up That Hill (A Deal with God)’ by Kate Bush. The song is very important in this season and it left such a good impression on fans in fact so many people are streaming the song that it re-entered the Billboard Hot 100 on June 11, 2022, at number 8, making it Bush’s highest-charting single on the Hot 100 to date! I’ve caught myself humming the song to myself and re-playing the scene in my head over and over.

TikTok is honestly a blessing to artists because once your song gets trending on the app, you’re guaranteed success and new fans. Another song that’s trending because of the show is ‘Pass the Dutchie’ by Musical Youth and it’s associated with a new character, Jonathan’s (Charlie Heaton) new friend Argyle (Eduardo Franco). Memes from the show are also going around the platform and it had me confused at first because I haven’t watched the season so I can’t imagine the confusion people must feel if a ‘Stranger Things’ meme popped up on their for you page. There’s a grandfather clock chime that’s trending and users also explaining what their song will be to free them from the villain this season, Vecna. This is one of the reasons why I support weekly releases instead of the binge release format, I want to be in on the joke.

When the series comes to a close, I know people are going to be sad regardless of how it ends because people naturally don’t like goodbyes. Fans now are going as far as getting El’s number tattooed on them and that’s a story for another day but people want to show their appreciation of the show in some way because the show made an everlasting impact on them. I know someone out there is a ‘Stranger Things’ super-fan and has everything from the show and will definitely be in a 10-year anniversary documentary about the show someday. In the end, you can’t ignore the impact that ‘Stranger Things’ made on my generation and generations to come.

Volume two of ‘Stranger Things’ season four will arrive on Netflix on July 1, 2022.