How the App ‘Fave’ Is Changing the Fandom Space 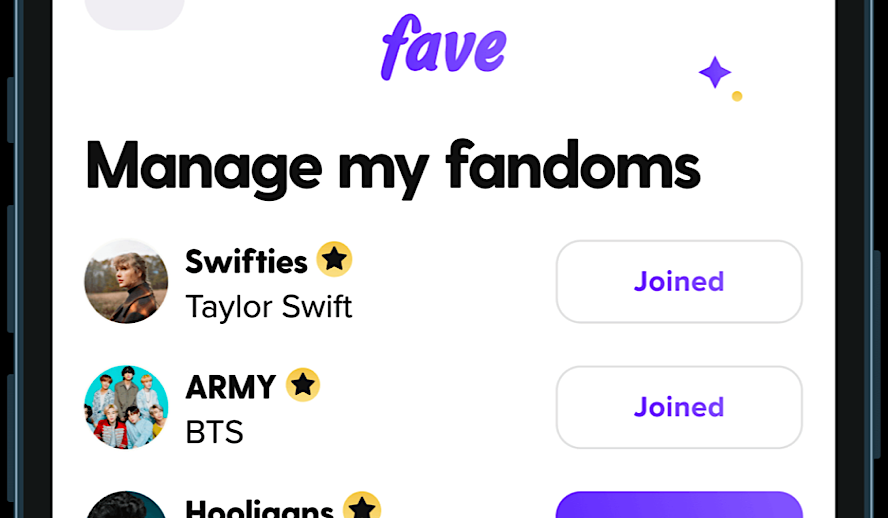 Being a part of a fandom is something that brings a lot of people joy because it distracts them from the problems they have in life and it gives them a chance to connect with others who enjoy the same thing as them. There are a ton of different fandom’s out there and some people may not interact with them because of the nature of them or some just simply being toxic. However, being a fan of something should be fun for someone because you have so much love for something, you want to be able to interact with other people or buy items that show your love for that one thing. I know for me, I never got very engaged with fandoms because I didn’t know where to start or I felt like I didn’t fit in so I basically was standing on the sidelines watching other people have fun. I believe the Fave app is going to change the fandom space so that it makes it easier to connect with others and have a space where you can share memories with one another.

I talked with the CEO and Founder of Fave, Jacquelle Amankonah Horton and she says “Fave is a platform that is dedicated to super-fans, it allows for fans to come together to connect with each other and meet other like-minded fans.” It allows fans to document and share special moments surrounding their favorite artist or creator and have a fan-driven marketplace where fans are creating unique items for others to enjoy. Hortan says it also empowers fans to form a business based on what they love, “Typically, the creator economy is around the creators, people with the IP, but the people who are fans of them, instead of just being consumers, they can also now form businesses and get a cut and slice of that creator economy by creating work that allows them to show off their own skills via the artist that they love and now they can make a living by being a fan.” The app also offers a cut of revenue for the artist from the fan activity so fans can avoid getting takedown notices therefore, it’s a win-win situation for the fan and the artist. This app allows fans to form relationships by finding other people who are also passionate about the artist and she’s seeing fans form deeper bonds with one another.

To sum it up, Fave is an app for super-fans to connect with other super-fans very quickly and they basically have an app dedicated to where they can post about the artist they love. For example, on Twitter, it’s difficult to connect with other fans because you just don’t know where to start and who to follow but with Fave, it’ll be easier to jump right into it because you know everyone is a super-fan like you. I truly believe this app is going to change the fandom space because of its simplicity a fun and engaging app.

Fave has fan badges which “allows for fans to earn these icons within their user profile that represent the things that they have done as fans and then from there they can unlock exclusive rewards,” Horton explains. For example, there are fans who are earning badges in a “I was here moment” like I went to this special event or I purchased this exclusive piece of merch and they can document those moments in real time. These fan badges encourage users to show how dedicated they are and have an app to document all the things they’ve done as a fan. Most of the fans on the app are having fun earning and collecting these badges to show off and it drives fans to keep collecting them.

They kicked off the fan badges two weekends ago at the BTS Las Vegas concert where there were many official and fan base events going on throughout the two weekends and there were fan badges for all of those things. For example, fans could earn a badge going to days of the concerts, to one of the livestreams, to a pop-up experience, and recreating a photo that two of the band members did. Fave can put out badges as they happen for example if something went viral on Twitter, the fans would get a badge for it. Horton says “We see this as something that can continue to unlock and entertain fans, while at the same time playing this role at showcasing who is a real fan and what they’ve done as fans.”

In Horton’s professional life she spent seven and a half years at Google and five of those years were at YouTube and she was driving the creator and the fan engagement products. She saw that the creator had many ways to engage with their fans but the fans had limited ways to engage back or to connect with each other. Then in her personal life, she grew up being a super-fan and didn’t have other people to connect with and felt overwhelmed with social media because there are millions of people and she didn’t know where to start a conversation with somebody. Horton wanted more ways to immerse herself into the super-fan space therefore, she wanted to create a platform dedicated to that super-fan energy that allows them to thrive.

One of the fans said to Horton that the app is really cool because instead of having all of these pictures that I’ve taken just die in my camera roll, there is now a purpose for them that I can showcase and keep a record of on the app. There are currently fifteen thousand users on Fave and this is across the three fandoms, Swifties (Taylor Swift), Hooligans (Bruno Mars), and ARMY (BTS) and the app will continue to expand to other fandoms. To keep up to date with Fave check out their website to learn more about what the app offers.