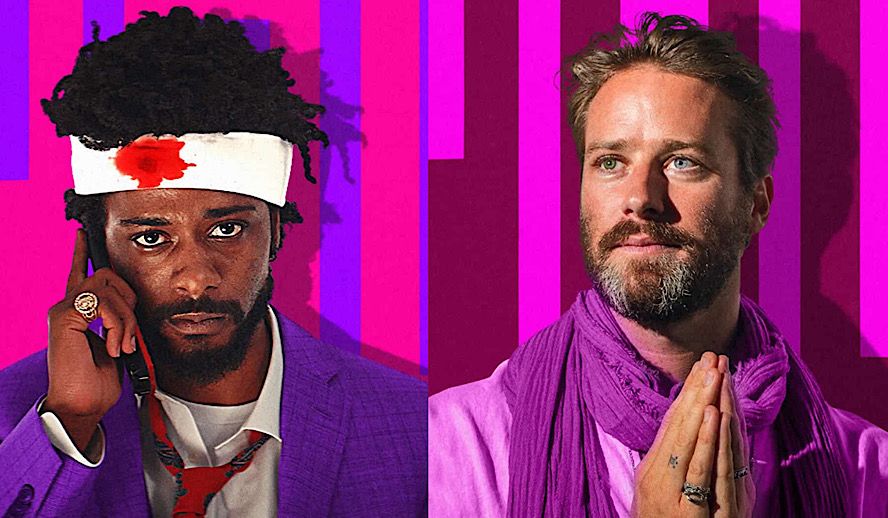 In a time when the cinema world seems to be dominated by superhero movies, remakes, and stories predicated on basically any I.P. (shoutout ‘Cats’), it is exceedingly refreshing to watch something as unique and ambitious as Boots Riley’s ‘Sorry To Bother You’. The film takes us on a wacky, hilarious, visually stunning journey, where we follow a young Black telemarketer, Cassius Green (played by Lakeith Stanfield), who begins to move up the ranks when he discovers how to use his “White voice” and joins the elite Power Caller team working for an exploitative corporation, WorryFree.

When he discovers the horrific things WorryFree is doing to people, he joins his girlfriend, Detroit (played by Tessa Thompson), and other telemarketers in striking against and exposing WorryFree’s crimes against humanity. To put it a bit more succinctly (and in the words of Boots himself), it’s “an absurdist dark comedy with magical realism and science fiction inspired by the world of telemarketing”.

‘Sorry to Bother You’ – A Uniquely Eccentric Film

‘Sorry To Bother You’ flies in the face of many filmic conventions; it does so in its tone, genre, and by the sheer breadth of subjects it explores thematically. In terms of tone, it’s both funny and dramatic. It’s sweet and also deeply unsettling. It’s decidedly tongue-in-cheek, but also deadly serious. The closest tonal comparison I can make is to Charlie Kaufman’s ‘Being John Malkovich’. Both have a certain capriciousness and surreality, though ‘Sorry To Bother You’ is more political and also, somehow, more whimsical.

The film is rife with surreal juxtapositions and exaggerated absurdity that contribute to the movie’s overall weirdness and unique tone. (The most notable juxtaposition is of course, “White voice”, but we’ll get to that later.) Whereas most writer-directors would merely intercut a phone conversation between the two locations of the respective telephoners, Riley has our protagonist, Cassius Green, along with his whole desk, come crashing into the physical locations of the people whom he is phoning.

Related article: Related article: Did you see the hidden messages in ‘Call Me By Your Name’? Find out behind the scenes facts in the full commentary and In-depth analysis of the cinematic masterpiece

In fact, everything is exaggerated. The elevator going to the Power Caller floor is ridiculously gaudy, complete with velvet curtains, a chandelier, and an automated voice that tells him things like “you can make the world bend over at your whim” and “I wish I had hands to caress your muscular brain”. We watch Cassius wait patiently as his boss inputs a 30-digit passcode to open a safe. When we meet the antagonist, Steve Lift (played by Armie Hammer), he’s doing a line of cocaine that’s so massive it takes him about ten seconds to snort.

“White voice”: The Performance of Race

The idea of “White voice” is central to the film’s story and thematic content. It first appears in a scene where Cassius’ older, Black co-worker, Langston (played by Danny Glover), notices that Cassius is having trouble making a sale. In fact, he’s having trouble even keeping people on the phone! Langston tells Cassius that he should try using his “White voice”. (When Cassius does try his “White voice”, Lakeith Stanfield is actually overdubbed by a White actor, David Cross.) Cassius gives it a go and starts actually making sales. He gets better and better and is eventually promoted to the position of “Power Caller”.

What “White voice” is really about, though, is the performance of race. In the film, Langston tells Cassius that “It’s not what all White people sound like- there ain’t no real White voice, but it’s what they wish they sounded like”. Boots Riley explains that the White voice is equated with a life of comfortability, prosperity; it’s what White people think they’re supposed to sound like. It’s part of a whole racist conception of what Black people are like and how White people are different. Riley says that the movie is largely about “this performance of Whiteness as opposed to this performance, this style of Blackness…In reality, it’s a performance that we’re all doing”.

This idea of the performance of Whiteness or Blackness appears in other parts of the film as well. Cassius’ girlfriend, Detroit (Tessa Thompson), is literally a performance artist and uses her own British White voice in a very strange art performance. Toward the end of the film, Cassius is pressured by a room full of mostly White people to get up on stage and rap, despite his insisting that he doesn’t know how to rap. He eventually acquiesces, gets on stage, and starts trying (unsuccessfully) to rap.

After a few awkward moments, he starts jumping up and down yelling the N-word and the crowd of White people goes crazy and starts chanting along with him. It’s a funny moment, but it’s also heartbreaking. We watch Cassius as he is forced to perform both Whiteness and Blackness. I don’t think there are many films out there with this sort of commentary on race relations in the U.S. and Boots Riley deserves to be applauded for the insight and courage it took to tell this story in this way.

‘Sorry To Bother You’ also provides a poignant commentary on class, capitalism, and corruption. It starts when one of Cassius’ coworkers, Squeeze (played by Steven Yeun), organizes a union and leads a protest at work. He yells “Phones down!” and all the telemarketers on the floor drop their calls in protest for fairer compensation. However, conflict arises when, directly after this first protest, Cassius is promoted to Power Caller, forcing him to choose between a much higher paycheck and supporting and standing with his peers.

As the film goes on, the telemarketers’ strike and ensuing demonstrations become increasingly intense and they are eventually met with a highly militarized private police force. This police force protects the elite Power Callers who work for WorryFree, a corporation that is essentially selling slave labor. Later in the film, WorryFree is exposed, but the government does nothing about it; they simply don’t care. This is really a biting commentary on corruption and capitalism in the U.S. — corporations selling slave labor, militarized police crushing opposition, people having to put their lives on the line for fair wages. While ‘Sorry To Bother You’ is full of absurdism and satire, there is something eerily realistic about it all.

‘Sorry To Bother You’ proves to be a true masterclass in shirking film conventions and defying audience expectations. This film is an important one, with far-reaching political and social commentary. It’s something we need more of in the film world and I have a strong feeling that Boots Riley is not finished.