‘I’m Thinking of Ending Things’ Review: Unparalleled Kaufman Paradigm on the Portrait of Aging and the Corkscrew of Time 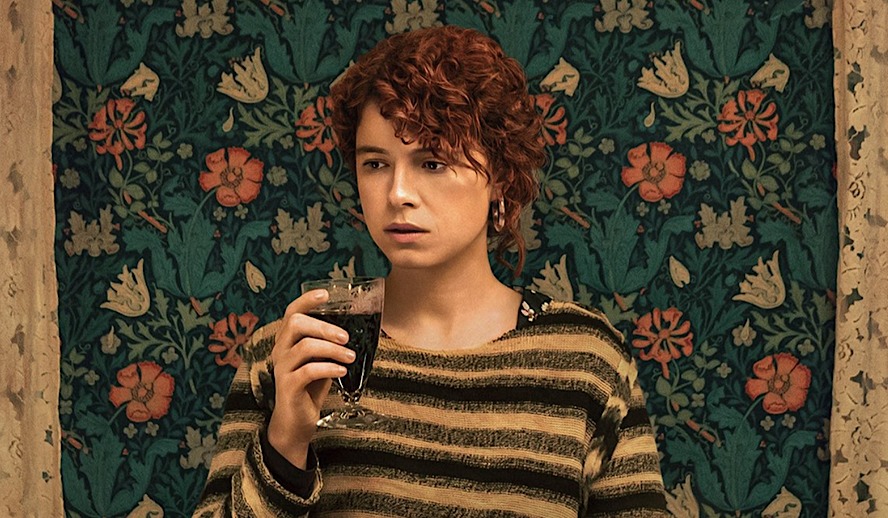 With dizzying intellect and a flurry of references from Hollywood and beyond, we are once again willfully encapsulated in Charlie Kaufman’s snow-globe. Kaufman’s imaginative dialogue and poetic prose launch us into an existential black hole, forcing us to contend with the nonlinear nature of time passing, the isolation one can feel in relationships and the dread around the degenerative decline of our bodies and minds as we age. ‘I’m Thinking of Ending Things‘ tells the story of a young woman who contemplates her inevitable break up while on the way to meet her boyfriend’s parents.

Starring Jesse Plemons, the doomed boyfriend, whose disquieting performance complements Kaufman’s atmosphere of general malaise. Plemons, previously playing the mild-mannered sociopath Todd in, ‘El Camino: A Breaking Bad Movie’ portrays a familiar aberration which seems like it could have been the performative prelude to his casting here. There is a certain innocence to his character, in all it’s banality and dread, that is actually pretty humorous at times. His quirks are well balanced by his female counterpart and leading actress in the film Jessie Buckley, or “Lucy”, whose neurotic nature is both hilarious and compelling to watch. The offbeat undertone is well balanced here by her humanistic playfulness filled with loving jokes and cartoonish facial expressions. Her impressions and comments will either leave viewers reeling in profound thought or giddy and giggling like old friends on a coffee date. You can’t help but fall in love with her intellectual quirkiness and kind heart.

Related article: Why Won’t Sherlock Holmes Ever Die? Since 1887

Kaufman sticks true to the unfolding ambiguity and intended mystery, leaving the audience perplexed and riddled with questions pertaining to the plot and overarching theme. Plunged into a world furnished with overlapping dualities, viewers are wedged tightly into his universe strewn with characters battling some form of cognitive dissonance. An overwhelming sense of uncertainty seeps into each passage as the viewers and the young woman fumble with fickle inaction, plummeting the audience into an unsettling limbo that permeates throughout the film for an uneasy, suspenseful ride filled with unexpected moments that send shivers up the spine and the psyche.

A Wellspring of Worlds Within Worlds, and Poetry

Kaufman is notorious for his artistic overlay of films within films. His imaginative, almost Inception-like integration of a story within a story is both intriguing and mind-boggling. A collection of self-referential, meta masterpieces that are both surreal and sometimes pretty comical. His aptitude for making references and spins on other films, critics, and artists to layer on more dimensions of overlapping realities is bizarrely captivating, kind of like a Russian doll effect.

Poetry poses some notable inspiration in a number of his films. The title, “Eternal Sunshine of The Spotless Mind” was inspired by an Alexander Pope poem and is quoted by a character in the film played by Kirsten Dunst. Mysterious declines in health happen to be a hot subject in his characters, and Alexander Pope suffered from a rare form of tuberculosis, deforming his bones and deeming him hunchback. In Being John Malkovich, he rehearses lines from Shakespeare’s Richard lll, and in Synecdoche New York, a Rilke poem is featured on the radio in the opening scenes. In I’m Thinking of Ending Things, the young woman in the film is a beautiful poet, her words will stick with you after the film ends. The cryptic poetry book, Rotten Perfect Mouth written by a somewhat obscure poet Eva H.D, is referenced, though it is mysteriously out of print everywhere online. Aside from the inclusion of other artworks in his films, Kaufman’s writing in general is remarkably prolific and inventive. His films are a special treat to all the wandering misanthropes, existential entrepreneurs, and deep thinkers brave enough to stir the pot of their comfort zone.

So What Thematic Consistencies Are at Play in the Mind of Kaufman?

In this Netflix adaptation based on the novel by Iain Reid, Kaufman sows a stylish spin puckered with personal commentary drawn from his own macabre perspectives on the human experience, never leaving his viewers without some denseness to chew on. Reminiscent of his earlier works such as ‘Synecdoche New York’, the objective world is stripped down into imperceptible frenzied fragments that leave its audience jarred and hungry for some release of tension.

The story opens on a long drive through the snow, and one can help but wonder if landscape plays an elemental role in his films, similar to ‘Eternal Sunshine of the Spotless Mind’, which also burrows us into a winterish world of snow and a dim hue of light. It’s not too outlandish to fantasize that Kaufman finds fertile soil for some melancholy reflection on a snowy winter night, cold wind biting at his cheeks, sipping wine in isolation, and contemplating the meaning of existence.

Another concept trickled through many of his works is the idea of occupying someone else’s mind. The notion that the mind is a malleable module, easily misplaced, possessed, and muddled with incomplete bits. The question of whether the self really exists at all, or rather serves as a place marker in the mind or imagination of another. His execution of solitude within the mind is masterful, truly capturing the sheer alienation of confronting the finitude of our mortality alone.

‘I’m Thinking of Ending Things’ is a Must-Watch

The meta bits of his work tends to reflect a lot of his own sensitivities as a versatile artist. Most creatives project their own ideas and experiences into their plot lines and characters, it’s kind of the name of the game, but Kaufman seems to be more blatant about it, most of his characters being writers, directors, or artists of some capacity. The heaviness of being a creative and all the weight that comes from that sort of vulnerability is usually presented with a kind of self-deprecating humor that makes his characters seem both endearing/ borderline piteous and desperate. Something many artists can relate to.  Although, there is a special lightness that lends its hand to the hilarity of it all and the absurdness of brewing in your own narcissism. It’s fun to watch these characters get lost in their own heads, it’s almost validating if you’re someone who tends to overanalyze your thoughts and the world, which, going out on a limb here, seems to be a famed Kaufman trope.

Another common theme in his films is the dramatic flux of change in the character’s physical appearances/ depletion of health. Unknown medical conditions present themselves as his characters appear to dissolve. It’s pretty well known that everyone changes and ages over time, but its recurring appearance is uniquely depicted throughout a skewed timeline in many of Kaufman’s films. Hairlines recede/ change color, memories are flap-jacked, and people age abruptly in ways that seem incongruent with conventional plot progression. The chronology is often incomprehensible, jumping from one incoherent moment of time to another. Almost to say that to catalog human existence by means of events, success, youth, and sexual allure, health, etc., is an infringement on some greater understanding. A culturally accepted phenomenon that ultimately leads to despair/disillusionment because their inherent nature is stagnant in a world of constant flux and transformation. It begs the question: When the inevitable mortality of self is confronted eye-to-eye, what should be made of it? If one comes to see that they are nothing,  what then can they make of themselves?

Through his work, Kaufman crafts an epicenter of deep thought and motivation. Viewers can either finish his films feeling unhinged and liberated, or left with a sense of dread and a crippling responsibility to conduct meaning out of nothingness.

‘I’m Thinking of Ending Things’ is available to stream on Netflix.