‘Scream’: A Blood-Splattered “Requel” of the Legendary Meta-Slasher 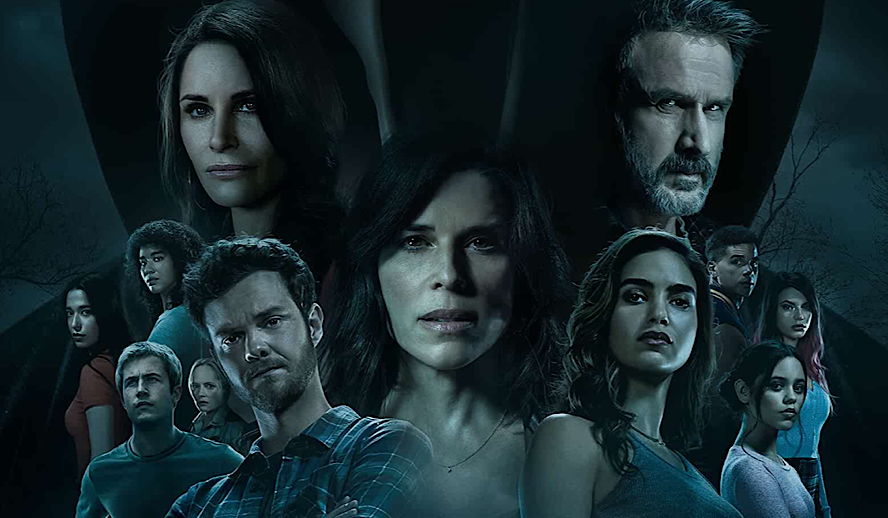 For the Fifth Time: What’s Your Favorite Scary Movie?

‘Scream’ ‘22 has had no modest premiere, touting an over 36 million opening weekend as the fifth and final installment of the franchise that has enthralled both your average audience member and your horror film fanatic since the original was released in 1999. The new cast is composed of a collection of new faces to populate this familiar setting: Jenna Ortega of ‘You’, Jack Quaid of ‘The Boys’, and Melissa Barrera of ‘In the Heights’.

After Tara (Ortega) is attacked in her suburban home by an unknown assailant following a collection of deriding phone calls, her estranged sister Sam (Barrera) is drawn back to their hometown of Woodsboro. Scorned by a town-wide curse permeated by tendency towards bouts of serial killing, Sam must navigate not only the uncertain future of this infamous place, but her own bleak past in another real-life, blood-soaked ‘Scream’ reboot.

But reboot isn’t exactly the right term, and in order to save us the agony of attempting to identify what sort of contribution this is to the series, ‘Scream’ ‘22 defines itself as an attempt at a ‘requel’, “not quite a reboot, not quite a sequel” of the original film; this is filtered through the lens of the in-universe ‘Stab’ movie lore. Trading in the sun-bleached, crimson-and-candy tone of the original films and donning the sleek and aesthetically vacant appearance of like… any other movie, ‘Scream’ ‘22 seems to want any familiarity to lie in the return of franchise cornerstone characters like Dewey Riley (David Arquette), Gale Weathers (Courteney Cox), and the final girl, Sidney Prescott (Neve Campbell), who are called back like the children of ‘IT’ to put Ghostface to bed, once and for all (but don’t they always say that?).

In addition to a few from the classic collection, this installment also features an ensemble of thrown-together “tight-knit friend group” characters, though there are a few gems, including the movie-buff stand-in and niece of Randy (Mindy Meeks-Martin played by Jasmin Savoy Brown), and another new Wes Craven insert character, Wes (Dylan Minnette). There’s this sense that they are supposed to embody the various established archetypes from the previous films, but there’s so little TLC paid to all of the people that we’re supposed to be worried that any meaning ascribed to their presence becomes totally diluted. But while I think that the new characters aren’t as effective as the other ‘Scream’ ensembles, especially the first, this isn’t the greatest flaw. The greatest flaw is that despite this fact, the time taken from them isn’t actually used to give the rest of this story the due process that it deserves.

By that I mean, was it really appropriate to end this installment with some sentimental, half-screwed cap on the longstanding partnership of Dewey and Gale Weathers? With a hollow illegitimate child plot point that ends up so banal as to be completely unimportant, and only as relevant as is needed for the film to make narrative sense? With writing that completely squanders what could have been a natural progression into the nuanced world of Cinema and fandom, and instead opts for less subtlety, more death, and an emphasis on nostalgia factor, donning familiar pieces of the preceding films like a corpse marbled and made-up for the funeral service so the family can bear to look at it?

Okay, maybe I’m being a little dramatic, but does this soulless piece of shoe-shined IP really pass for an artistically authentic attempt at a “requel”? I guess you’ll have to decide for yourself.

For Wes: In the Shadow of Its Predecessors

What ‘Scream’ ‘22 does have is a host of satisfying kills, built up with that constant tinge of suspense that good ‘ole Ghostface – ever transient and unstoppably vindictive – could be lurking around any blatantly framed door or corner. The one benefit to a film so desperate to thwart itself is that I truly didn’t know what would happen, what with the entire thing designed like a rollercoaster of potential jumpscares, death, comebacks, and threats to the sanctity of the original ‘rules’. This film truly revels in the brutality, as Ghostface does, marinating in the moments between gloriously barbaric murder scenes from which no character – new or old – is ever truly safe.

This installment lacks the direction of the late, great ‘Master of Horror’ Wes Craven, as well as the writing of Kevin Williamson, who contributed to the screenplay for over half of the films in the franchise. This isn’t to say that anyone was looking for a sloppy replica of the first four, but isn’t the whole point that ‘Scream’ does what has been done before but with the saturated, sarcastic tinge of Cinematic analysis following years of formulaic horror? This new film tries to enact this tradition through name-dropping examples of something they’ve coined as “elevated horror”. But from ‘The Witch’ to ‘Hereditary’,  “elevated horror” feels somewhat conflated with “contemporary horror”, and there’s nowhere near enough of an earnest attempt towards illuminating any new interpretation beyond this shallow, unimpassioned commentary.

But, it’s all so self-aware, right? That just doesn’t cut it for me, not even for ‘Scream’. You see, this newest installment is composed to defend and excuse itself by nature, draped under the legacy of – no typo – the real meta-meta-slasher. So yes, even in spite of my reverence for the entire franchise, I’m just not satisfied with this stale excuse of thematic tone and references.

It’s supposed to be the same ironic criticism of horror films that we know and love, but something about it feels so much cheaper, and the constant tendency towards over-explanation in this new story feels symptomatic of an overarching problem within a new narrative: a lack of true meaning beyond the randomly-generated quips of some half-written caricature of a Letterboxd teen. So don’t say it – “but that’s how Scream is supposed to be! That’s why it’s meta!” – since you and I both know it’s cop-out. Among films like ‘Spiderman: No Way Home’ and ‘Matrix: Resurrections’, ‘Scream’ ‘22 is another story almost exclusively structured around the memory of the other, much better films that came before it.