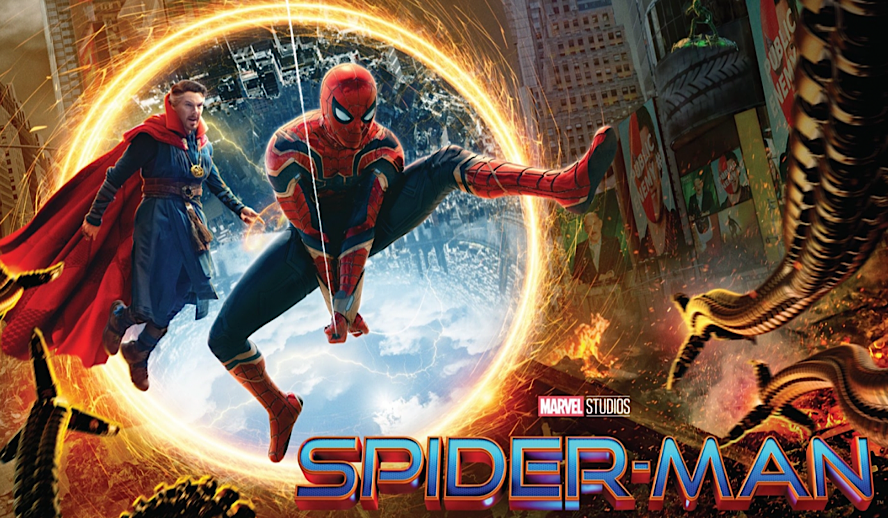 The newest installment of the long-standing ‘Spiderman’ franchise drops audiences right into the action, picking up the problems left from the predecessor, ‘Spiderman: Far From Home’, in which Quentin Beck (also known as Morbius) reveals the true identity of Spiderman to the public, turning Peter Parker from a normal teenager to renowned superhero. In losing his anonymity, Parker (Tom Holland) and his most trusted allies – his girlfriend MJ (Zendaya), best friend Ned (Jacob Batalon), and his Aunt May (Marisa Tomei) – are all pushed into the spotlight, and in turn, into imminent danger of anyone looking to hurt or threaten Spiderman.

The first tragic result, however, is when the young trio are all rejected from MIT in light of the recent controversy. Parker, terribly guilty and seeking help, visits Doctor Strange (Benedict Cumberbatch) in search of a spell to reverse the reveal of his identity. When the spell goes awry, his enemies in other universes begin confusedly seeking him out in this brand new dimension. Predictably, action ensues.

‘Spiderman: No Way Home’ dares to combine all of the favorite elements of the older films and re-inject within them a buoyancy of this new imagining, creating a freakish (but admittedly fun) hybrid of new and old. Morphing characters from the Sam Raimi and Marc Webb editions with the ‘modern’ canonical Spiderman universe, there’s nothing more satisfying to longtime fans than seeing so many relevant, memorable roles reprised in this film. ‘Spiderman: No Way Home’ is unflinchingly ambitious in weaving different but familiar narratives into one, wrangling the details of a story that encompasses not only the latest edition of Spiderman but even the previous films that are just as integral to the collective consciousness of a typical blockbuster movie-goer or Marvel-lover.

This is to say: there’s something intriguing for everybody, from the nostalgia-fest of so many reprised roles to the ever-shifting but always growing stakes of your typical superhero film, and this franchise, in particular, more than benefits from an endearing and well-casted ensemble. Sparring against a handful of familiar but long-absent supervillains of Spiderman lore, Tom Holland is back with his signature, shiny freshness, wrinkled shirts, and awkward charm that so perfectly embodies Peter Parker, though the 25-year-old actor has lost some of his scrawny teenage realism somewhere over the course of appearing in five huge MCU films.

Touting one of the most popular celebrity couples of Hollywood right now, this Spiderman also pulses with the sort of romantic star power that can only blossom from a pair of performers this well-known and in-demand. In ‘No Way Home’, Parker and MJ are finally dating, and their budding relationship starts taking shape alongside the world-bending action-drama of the Marvel universe. As with the previous films, I love Zendaya as MJ, and I think that she finally gets to settle into a more comfortable rhythm than the previous movies now that the two characters are finally together. It definitely helps that Holland and Zendaya, predictably, have great chemistry on screen.

Unfortunately, I do think that this film lost sight of the villains when it began to focus on the more intimate tragedies. While this makes complete sense in a literal way – the main ‘good-guy’ ensemble has amazing chemistry, this film is packed with broader, game-changing circumstances, and there’s already plenty of content stuffed into this nearly two-and-a-half-hour runtime – that doesn’t stop me from wishing that cohesiveness was sometimes prioritized in favor of meandering away from the plot for more nostalgia. It doesn’t help my yearning that the cast of villains is star-studded: with Willem Dafoe, Alfred Molina, and Jamie Foxx back and better than ever in their respective roles. While Molina and Foxx are great, Dafoe is as incredible and intense as ever in the ‘main’ antagonist role and with the most opportunity to develop his character.

‘Spiderman: No Way Home’ – For Movie-Goers, For Marvel-Lovers, Basically – For the Masses

The most evocative component of ‘No Way Home’, which is formulaic by design, is that it retroactively observes who Spiderman is beyond the suit, the powers, or even the actor. In transcending the interdimensional boundaries that separate one heroic epic from another, the franchise is able to realize the humble virtue of Spiderman in a whole new way. With a vested focus on the people that surround Peter Parker – as well as the people that want him dead – this film magnifies the thematic core of this beloved character: what it really means to be ‘courageous’, and to do the ‘right thing’ in the face of uncertainty.

Make no mistake, while ‘No Way Home’ can be enjoyed by fanatics and laymen alike, the basic plot of this installment is best enjoyed by those who remember the Spidermans, villains, and plotlines of yesteryear. Familiarity with the various universes isn’t a necessity, but I would definitely say that it makes a noticeable difference in the emotional experience. Despite how heart-wrenching and detrimental this installment is to the structure of the ‘Spiderman’ universe, more than anything, it is the ultimate time-transcending interdimensional love letter to a world, a character, and a franchise of which people just cannot get enough.

Fans of the MCU can look forward to more films in the future, such as an upcoming ‘Doctor Strange’ sequel starring Benedict Cumberbatch, titled ‘Doctor Strange in the Multiverse of Madness’ and set to release in 2022.