‘The Manor’: Barbara Hershey Stars in the Latest Derivative Psych-Thriller from Blumhouse TV 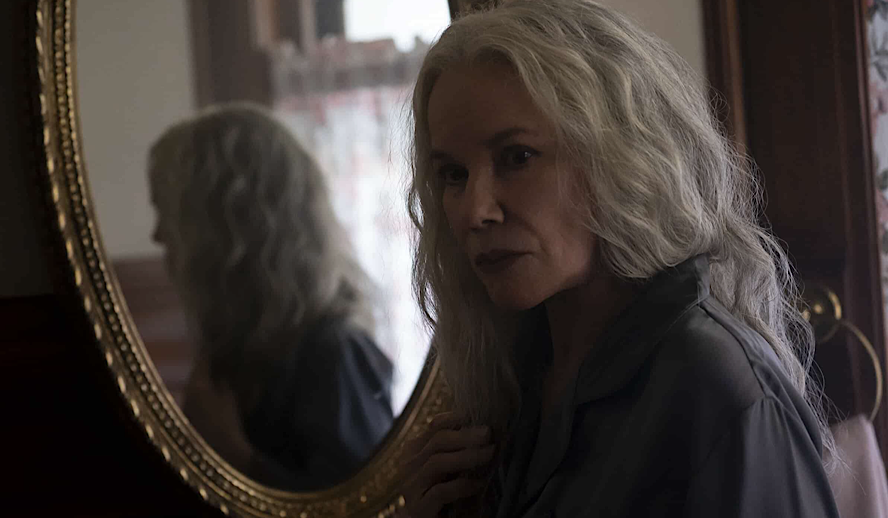 ‘The Manor’ – A Unique Premise Worth Considering

‘The Manor’ wastes no time in setting the events in motion that lead our vibrant protagonist, Julia Albright (played by Barbara Hershey), to end up in the seemingly upstanding facility that acts as the namesake of the film. Following a sudden stroke during her 70th birthday party, Julia’s family opts to enroll her in a long-established nursing home facility. Shortly after the beginning of her stay, she begins having strange nightmares, and experiences alarming power plays by the facility workers, leading her to believe there is something far darker buried in the ages-old underbelly of this historic manor.

Barbara Hershey, white-haired and glowing in her portrayal of the energetic former dancer, is sympathetic enough from the very beginning that it’s not difficult to suffer along with her unfortunate story, especially as the people around her grow more suspicious of her mental clarity. Much of the triteness comes from the dialogue rather than her performance. The premise of this film – a seemingly lively woman condemned to a nursing home that slowly grows more sinister and controlling – promises a tale that delves into the core of human fears towards growing old, towards losing autonomy, towards losing your sense of identity. These are promises that it just can’t keep, choosing to funnel all of this attempted tension into flat scenes that brim with forced and unimaginative exposition. In the first third of the film, director Axelle Carolyn begins to plant seeds that will presumably come into dazzling fruition later in the film.

Julia grows more and more desperate as her loved ones increasingly doubt her sanity, even her beloved grandson Josh, played by Nicholas Alexander. Somewhere along the way, it loses its touch; this film just doesn’t have a willingness to ‘go there’ in any particular element. The supposedly escalating story is hardly reflected in the visuals beyond some enticing sickly green tones during the more fraught nighttime sequences. To this point, there is such a lack of style and tension to the narrative, with characters that are mostly indistinguishable other than their physical appearances, mostly blending into the plot as a collection of developmentally neglected minor characters.

From severed bird heads to Celtic runes to the complexity of intergenerational familial relationships, ‘The Manor’ sputters with the weak fumes of better films in recent years, the most notable being Ari Aster’s cult horror film ‘Hereditary’, with a dash of ‘Get Out’. The defining thematic thread that stretches throughout this film is the idea of not being believed, of being put into an environment that you can’t control nor escape. This is a perfect example of the horror niche I covered last week in my article over ‘Outsider Horror’. However, one of the most important pieces of crafting an efficient instance of Outsider Horror is the careful construction of a plot that perfectly interweaves crucial elements of the climax throughout the rest of the story. It has to be seamless, and subtle enough that the audience earns the reveal alongside our curious protagonist.

Beyond that, it has to be intriguing. This is where ‘The Manor’ struggles to distinguish itself. You can tell that the plot was crafted with as little attention-to-detail as it takes to craft the narrative which weaves our characters – hitting all of the necessary plot beats along the way – to the feeble end. Instead of delving into the neuroses of old age and the blurring line of sanity versus insanity, or truly diving into the mystic stories of various characters, Carolyn constantly chooses the side of blandness and sterility. While there were some instances of impressive creature design, it really lost its splendor as the film progressed. Even as the story is supposedly descending into suspense and madness, Julia never loses grip on her mind nor is there any tension in her evasion of the Big Bad.

This lack of an enticing overarching artistic vision causes this film to wither away at the climax in a collection of uninspired sound and visual direction, corny, on-the-nose dialogue, and an ultimately unsatisfying ending both by any genre standard. ‘The Manor’ presents a hastily-constructed sum of other stories on a silver platter and begs you to put the pieces together in a way that is as meaningful and thought-provoking as it seems intended to be. But that’s not the responsibility of the audience. It’s like another aimless, synthetic IV tapped into the bloodstream of horror, one which reads “cults” and “grandkids” and “sacrifice”.

Horror requires tension. It requires stakes so grotesquely high and looming with the impossibility that to be clutched in the sinister claws of the antagonist is a loss so horrifically salient that it pressures the boundaries of the film itself. This film only dares to dabble in a few instances of truly evocative horror, never truly earning fear beyond our most basic sympathies towards the main characters. As the film reached its tentative peak, I was more unimpressed than ever. All in all, ‘The Manor’ just doesn’t do it for me; maybe briefly as a psychological thriller, but never as a horror film. So much about this film feels made-for-TV, completely resistant to lean into the raw physicality of terror. Instead, ‘The Manor’ touts a more distant, sanitized perspective on the forces that work beyond the characters. In conclusion: check this movie out if you really like Barbara Hershey.

If you want to check out this film, it’s streaming on Amazon Prime. Fans of director Axelle Carolyn can look forward to more of her horror work in this years’ already released TV series,  ‘American Horror Story: Double Feature’. Barbara Hershey is set to appear in the upcoming crime thriller titled ‘Nine Bullets’ alongside Lena Headey and Cam Gigandet, which is currently in post-production.