‘Free Guy’: A Journey Into Sentience with Ryan Reynolds and Jodie Comer 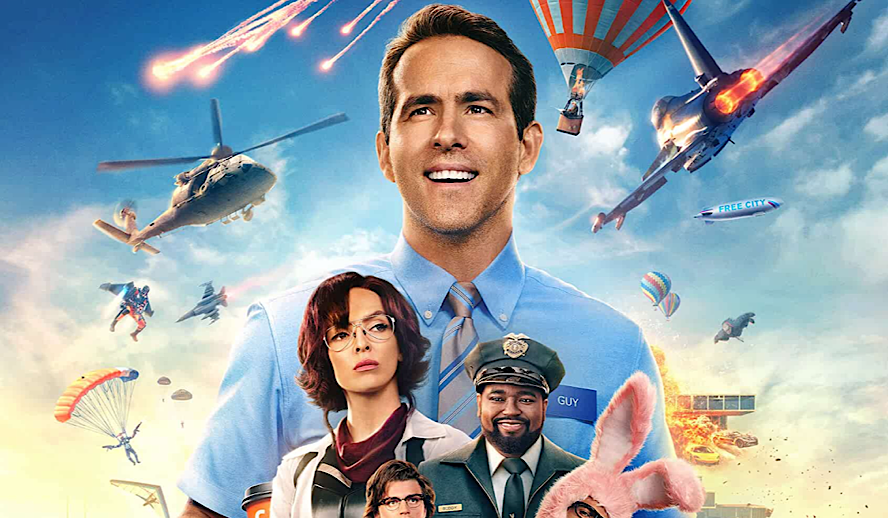 Guy lives in Free City. Guy is a bank-teller. Despite the rampant hijacking, robberies, and murderers that happen around him every day at the hands of the ‘sunglasses people’ (or as we quickly learn, real gamers joyriding around his digital world), Guy manages a pretty sound life with his goldfish, his best friend Buddy, and his various menial tasks. One day, Guy gets his own pair of sunglasses, and his once simple life is forever changed.

Shawn Levy is the director behind other family movie night classics like ‘Night at the Museum’, ‘Cheaper by the Dozen’, and ‘The Pink Panther’. After learning this, the steady pace and upbeat tone, buzzing with characters, catchphrases, and punchlines feel a lot more familiar. Here, Levy uses the Disney platform (and budget) to take audiences on a journey under the hood of artificial intelligence in the form of Guy the NPC, played by the ever-marketable Ryan Reynolds.

‘Free Guy’ brings to mind many classic open-world games, but ‘Grand Theft Auto’ is probably the most familiar; the sunny city is rampant with lavish sports cars, military-grade weaponry, and violent crime. Nonetheless, the unfortunate inhabitants proceed along their routes. But Guy is different, one day becoming fixated on a beautiful and mysterious player named ‘MolotovGirl’ (played by Jodie Comer). Because of her, Guy begins to look at his life in a brand new light. Reynolds is as charming as ever in this relatively squeaky-clean role, more experienced with being the spunky action hero of universes like Marvel’s ‘Deadpool’ or DC’s ‘Green Lantern’. However, as the internationally-known ‘Blue-Shirt Guy’ of Free City, he takes on a newer, nice-guy persona. There are still some edgier jokes tucked in there for the quintessential deadpan delivery from Reynolds, and though they sometimes feel a little unnatural, they still earn the expected laughs.

Jodie Comer is so likable in this, tethering the film together first as Guy’s multidimensional love interest and eventually the main catalyst of the plot. She became the star in a way that I didn’t expect, magnifying chemistry with every member of the cast and balancing out Reynolds’ pre-programmed politeness, injecting personality into a character that could have easily divulged into Manic Pixie Dream Girl territory. Lil Rel Howery is another highlight as Buddy, Guy’s happy-go-lucky and aptly-named bestie, always trying his best to be warm and empathetic towards our deeply-changing main character.

Joe Keery is nerdy and endearing as an MIT-genius turned mid-level employee of Soonami – the corporate giant behind ‘Free City’ and a clear play on Blizzard Entertainment – and Utkarsh Ambudkar provides some enjoyable if not slightly generic comedic relief on the real-world side of things. On the other hand, Taika Waititi is an unfortunate caricature in his role as the megalomaniac CEO of Soonami, with an over-emphasized lust for money and disregard for the integrity of his own game. The exaggeration of his complete awfulness is distracting, and turns him into the most video-game-like character of the entire movie.

“Bud, Do You Ever Think That There’s Got to Be More?”

While ‘Free Guy’ can certainly be enjoyed by all ages, the distinct catering towards late Gen Z and Gen A audiences (with Disney apparently even expressing interest in a sequel after only two days of topping the domestic box office, according to a recent tweet from Reynolds) is no surprise. This film prefers that you suspend disbelief, playing fast and loose with the rules and treating Free City simultaneously as an uncontrollable biome and also an infinitely manipulatable collection of 1’s and 0’s. While the payoffs are satisfying enough, it often feels like the story is cheating around the details. No one is expecting complex data science, but more commitment to world logic could have promoted this film from a pure kid-flick blockbuster to a spectacle of science fiction. I mean, Shawn Levy has executively produced both the Oscar-nominated ‘Arrival’ and highly-regarded series ‘Stranger Things’, showing that he has experience with thought-provoking concepts and complex, satisfying visuals.

Ultimately, you find yourself wishing they had done more with such an interesting concept, had used the reach and potential to craft something more.. dare I say, original? ‘Free Guy’ is one big collage of the most familiar parts of gaming and digital media, two things that have become deeply influential and integral to our day-to-day life. Packed to the brim with pop-culture references and cameos a-la ‘Ready Player One’ – made especially iconic due to Disney’s sprawling ownership of franchises like the MCU and ‘Star Wars’ – ‘Free Guy’ doesn’t utilize the environment to make any grand analyses of AI-sentience or the social structure of video games, instead jumping around in the general direction of certain ideas in order to keep the story chugging along at a snappy, content-filled pace.

It becomes increasingly apparent that these things, sweet nostalgia and an ‘ah-ha, I recognize that!’ sort-of feeling, are the strongest themes of this summer action-comedy. The film rarely ever errs into any meta-reflective ‘Westworld’ or ‘Ex Machina’ territory, prioritizing tropey emotional beats instead of multi-dimensional story themes. This is okay up until after the nostalgia-fest climax, where the energy falters and the plot seems to feel itself around into a dull and pre-packaged happy ending.

‘Free Guy’ is fun, but ‘Free Guy’ is not anything new. While there are commendable performances, most notably from Jodie Comer, the overall story and themes often fall flat, surrendering to a typical, profitable algorithm. Despite the rich concept, ‘Free Guy’ behaves more as a vessel for easter eggs and cameos than a commentary about free-will and game sentience. I would recommend ‘Free Guy’ for the comedic performances and amusing sequences of action and gaming visuals, but it’s a cut-and-dry crowd-pleaser above anything else.

Audiences can look forward to Ryan Reynolds starring in ‘Red Notice’ alongside Dwayne ‘The Rock’ Johnson and Gal Gadot, which is set to release in November this year. Jodie Comer is also starring in a film releasing later this year, a Ridley Scott-directed period drama ‘The Last Duel’ with Matt Damon and Adam Driver.