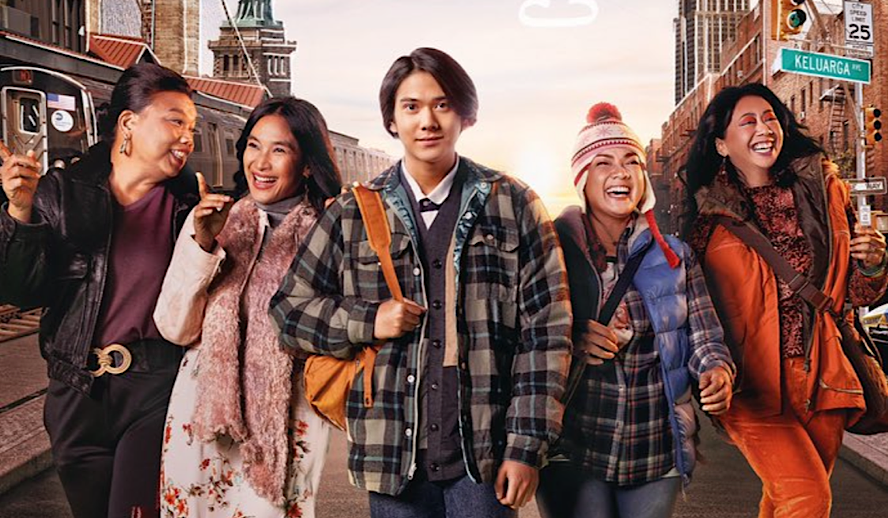 New to Netflix this week is an Indonesian dramedy from director Lucky Kuswandi, ‘Ali & Ratu Ratu Queens’ or just ‘Ali & the Queens’ depending on your region. The film follows young Ali, played wonderfully Iqbaal Dhiafakhri Ramadhan, who after the death of his father travels from his home in Indonesia to New York City in search of his estranged mother who left when he was a young boy. While in New York, Ali meets a group of four women in Queens who befriend him and aid him in the search for his mother.

‘Ali & Ratu Ratu Queens’ is an incredibly heartfelt and sweet film that is full of laughs and tear-jerking moments alike. With great writing, endearing and well-rounded characters, and terrific performances, I found myself smiling more often than not at the film despite a few shortcomings. No matter its missteps, what cannot be taken away from this film is the engaging story the filmmakers tell which makes up for any minor issues one could have with the film.

Related article: The Rise And Journey Of Daniel Radcliffe — More Than Just A Wizard

The role asks a lot of him emotionally and thankfully, Iqbaal Dhiafakhri Ramadhan was up to the challenge. Mia, the mother of Ali, is played by Marissa Anita and is another standout from this film. The character of Mia is very compelling and offers an unexpected twist into your expectations of how the film will play out, similarly to how DC’s ‘Shazam!’, starring Zachary Levi and Mark Strong, played with your expectations of Billy Batson’s journey to find his mother. Anita is perfectly balanced in the role of Mia, being very reserved when appropriate and then displaying full emotion when she lets go of that reservation.

The film is littered with exceptional supporting characters, namely the four queens of Queens. The characters of Auntie Party, Biyah, Chinta, and Anjeng, portrayed by Nirina Zubir, Asri Welas, Happy Salma, and Tika Panggabean respectively, are a jolt of life and energy to the film and provide some of the bigger laughs. The four’s chemistry reminded me of the ‘Sex and the City’ crew that starred Sarah Jessica Parker, but perhaps that’s just because they are both in New York City. Either way, the entertainment these four bring cannot be overstated. Nirina Zubir’s performance as Auntie Party was particularly compelling and offered some very touching moments between her and Ali. Another great performance came in the form of Aurora Ribero as Eva who acts as a love interest for Ali.

What Worked: Writing and Directing

The filmmakers behind the film did a great job at making ‘Ali & Ratu Ratu Queens’ feel fresh. The film has a few sequences that employ animation, namely at the beginning and end of the film, that was both stunning to look at as well as incredibly emotionally impactful — this was a very smart way to tell a story visually. Despite having a fairly used-before plot in the fish out of water takes on New York City, the film finds new ways to make it feel new and exciting.

The writing of the film tackles the effects on a child of having an absentee parent in a very smart and compelling way that reminded me of the Shawn Levy produced coming-of-age film, ‘The Spectacular Now’ that starred Miles Teller, Shailene Woodley, Kyle Chandler, and Brie Larson. The film also tackles it from the parent’s perspective which felt very honest and poses a question about the cost of chasing your dreams.

The cinematography had some very cool elements such as using camera movement to indicate the story which was very effective. There are many moments in the film where the camera does the talking, pulling focus, or shifting subject to indicate various story elements, for example, the passage of time. The filmmakers use music very well in the film combining the use of traditional score as well as contemporary music to help guide the emotion of the viewer as well as clue you in on where you are — depending on location and where Ali is as a character, the filmmaker will decide whether to use a score or contemporary music which sounds simple but is incredibly effective.

Another element that was appreciated was the balance of languages used in the film. So often characters who would not be speaking English speak English for the sake of the audience, this film has its characters speak the language they would speak in the context of each situation, similar to a recent Netflix film, ‘Tragic Jungle’.

While the film is very entertaining it is by no means perfect. Despite the filmmakers making the majority of the film feel fresh and new, there are scenes that dip too far into cliché and generic tropes that they could not go unmentioned such as the classic montage of our lead characters trying on silly clothing. One character at a food truck felt very much like a plot device which was unfortunate because the rest of the characters are so well written. Additionally, there are a few technical hiccups such as some odd edits where characters feel to jump around the space and even the unfortunate boom mic dipping into frame towards the end of the film. While these are notable issues, none of which ever impedes the enjoyment of the film and can be chalked up to minor issues.

‘Ali & Ratu Ratu Queens’ is a wonderfully told story that had me wrapped up in it from beginning to end. With well-written characters and incredible performances, one is quick to forgive its minor shortcomings in favor of enjoying this potent, heartstring-tugging story of a young boy looking for his mother. I highly recommend checking the film out on Netflix today if you are looking for a fun, endearing watch.

Check out ‘Ali & Ratu Ratu Queens’ on Netflix today. Be on the lookout for ‘Fatherhood’ starring Kevin Hart and Lil Rel Howery releasing on Netflix on June 18th.