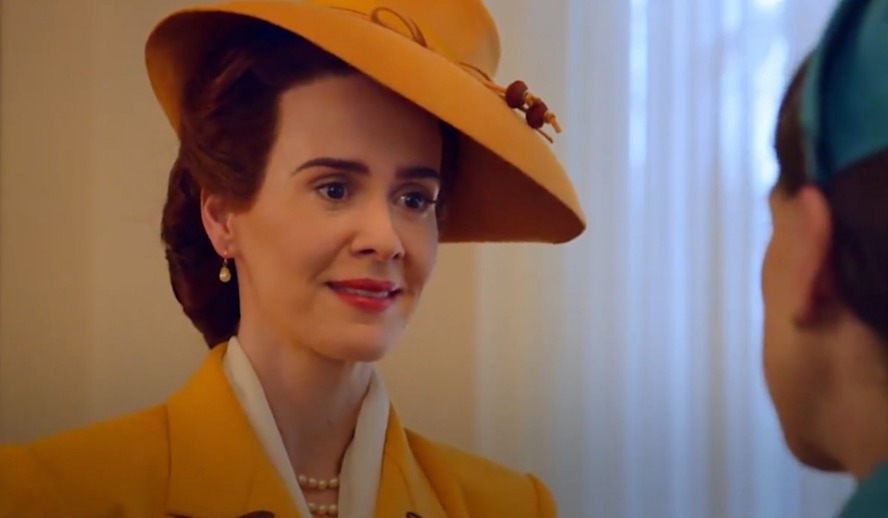 Ratched Review: Imagine yourself constrained in a brightly lit bluish room, clean sheets and towels folded to perfection, everything neatly in its place and everything still except for the baritone beating of your own heart. You are, for now, alone with your jet-line of thoughts, clustering the mostly empty space. Not a web or speck of dust to fight for your attention; just you, the sound of your heart beating, and your breath. Your ears perk at the chime of sharp heels hitting linoleum. Your heart beats faster because you have no way of anticipating what malevolent method is coming to you, all you know is that it’s coming. The light in the room seems blinding now, as you hear the lock to your door click open. The only things you have to hold on to are the prospect of healing (by what degree of excruciating suffering you do not know) and the sheets underneath your body, which have turned your knuckles just as equally cotton white, as you clutch them for dear life.

This is the kind of stomach-churning you can expect to endure in Ryan Murphy’s newest Netflix series Ratched. Created by Evan Romansky and developed by Ian Brennan and Ryan Murphy, this spinoff of the 1975 film One Flew Over The Cuckoo’s Nest starring Jack Nicholson (which itself was based on the 1962 novel by Ken Kesey), is jarring enough to give you nightmares. The prequel story is centralized on Nurse Ratched as we are plunged into the backstory of the nefarious nurse that dominated patients with a twisted iron fist.

The opening introduction feels immediately portentous, setting the bar for a special kind of wreckful brutality prevalent throughout the series. All the bright pastel pigments, ruby-red lipsticks, and general aesthetic elegance fling us into a Marvelous Mrs. Maisel-like world (more like a Morbid Ms. Maisel), decoratively rhythmical in style but eternally tonal opposites. The operatic sound design and the overly polished and ornate atmosphere soaks everything we see with a layer of falseness. Perhaps unintended, but I couldn’t help but take it to be symbolic:

You can get away with murder if you clean it up well enough (figuratively and literally).

Intonated with a similarly unnerving and spine-chilling feel as seen in American Horror Story, we are tangled in this psychological thriller that tests our capacity to endure its alarming piquancy. Set sometime after World War ll in the 1940s, the story follows Mildred Ratched, a woman whose covetous determination is so unremitting in its verve, it is both entertaining and intimidating.

The series stars a rare gem, Sarah Paulson, whose remarkable talent seizes our trust as she slices through the emotionally layered dichotomy of this character. It’s hard to understand the motivations at first for her at-times heroic and at-times sickly inappropriate behavior, but Sarah commits so intensely we are left feeling indebted to figuring her out, in all her tumultuousness. In one moment, we see her wrestling instant tears in witness of another’s pain, and shortly after she pivots, unyielding in her bitter coldness. Hellbent in accomplishing her mysterious agenda and willing to liquidate (again, literally and figuratively) anyone who obstructs her path, she is a peculiarly unique kind of shady.

Unbending in her persuasiveness, she manages to manipulate her way into employment at a notable psychiatric hospital in Lucia, a grim institution compared to its fantastic oceanic landscape cupped with wide skies and captivating cliffs. Although her loyalty and morality is altogether questionable, Mildred definitely has a special aptitude for handling patients. While it may partly be due to her cleverly duplicitous guile, there is no doubt that she can genuinely recognize and resonate with the intense suffering they experience.

It’s clear Mildred suffered a significant squall of her own trauma and anguish, which may have resulted in the amplification of her deceitful behavior. Congealing much of her identity while failing to healthily mutate past her own internalized torment and grievances, she is capable of connecting to others more deeply in her broader emotional range which sets her apart from the other nurses. It’s bizarre because while she intercepts the mental playing fields of others cunningly in favor of her will, she also bears the gift of knowing how to remain strong in the pit of insurmountable pain, making her a prime constituent for those in need of psychological support. There’s something almost maternal about her ability to dry the tears of others and force them to face the music, whether the song is odiously foul or not.

Throughout history, skepticism and fear have surrounded the types of practices employed by psych wards on their patients, and Ratched certainly exacerbates them (see also: Shutter Island), forcing us to confront the unethical quandaries that befall many behavioral facilities in their efforts to treat the mysterious mental illnesses of the mind. As an ever-progressing science, it’s a treacherous tightrope to walk, as many of the behavioral conducts that were once vilified and deemed as disorders have since been recognized by some practitioners as “normal” behavior.

This includes sexual taboos, tendencies, and behaviors that are not yet scientifically encompassed, but nonetheless many were (and still are) met with fear and judgment. In this series, many of the patients are taught to obliterate those inclinations which often results in the repression of them. When it might have been more helpful to observe and understand them, alternatively this method often tends to amplify them. The orgasm itself is a mysteriously powerful release of energy, a tool that can be used to perpetuate things that have caused us pain in a way to somehow justify that pain as normal or pleasurable, or something that is genuinely therapeutic.

The fear around mental hospitals and our culture’s fascination with using them in horror narratives is in part due to the truly horrific experimentation that occurred within their walls as they sometimes took desperate measures of intervention. Perhaps most notably controversial is the lobotomy, a thankfully ill-reputed neurosurgical procedure that involves severing connections in the brain through surgery to treat mental disorders. Due to the possible effects on the personality of patients post-treatment (lack of independent function, mental dullness, etc.), it has been banned in many countries and it is rarely used (and if used it is much more elegant) unless all other efforts have failed.

Related article: 32 Facts on Netflix Hollywood Series with Behind The Scenes Scoop

However, historically some facilities would abuse the practice as a means to control their patients and keep things orderly. The fear of losing control, being drilled into submission (once more, literally and figuratively) along with just the basic primal rejection to have some kind of object inside your skull and picking around your brain is very understandable. There’s something inherently terrifying about it: without the brain, who are we?

In Ratched, you will see this (and many other) horrifying methods at play. Whether the intention is to use patients as guinea pigs for science or to keep their patients docile and obliging, it’s organized torture. This is just one of many horrifying facets of this gruesome series, defined by an intriguing plot filled with mystery, captivating dialogue, and psychological suspense.

Ratched is available to stream on Netflix.