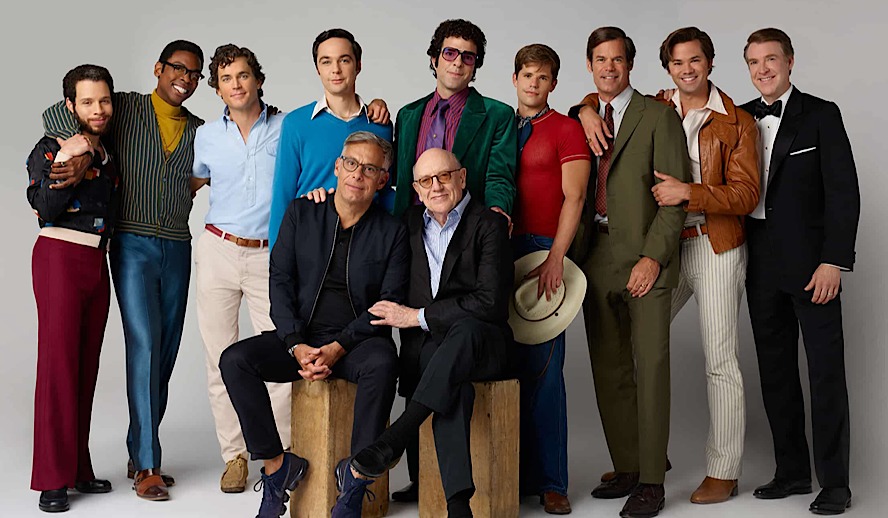 Photo: ‘The Boys in the Band’/Netflix

In April of 1968, Mart Crowley’s Off-Broadway debut of his play The Boys in the Band premiered in New York City. Just over a year before the Gay Pride Movement skyrocketed at the historic Stonewall protests, Crowley’s The Boys in the Band contributed greatly to the LGBTQ cause as it was a monumental moment for gay representation. “I also believe that one reason that Stonewall and Gay Rights happened – not the only reason, mind you, but one reason- is because of this play. After gays saw The Boys in the Band, they no longer would settle for thinking of themselves as pathetic and wouldn’t be perceived as such any longer,” recalls Peter Filichia, a well-regarded theater critic. “Now that Michael and his friends had brought their feelings out of the closet, this new generation would dare to be different. And, just as some whites’ view of blacks changed after seeing A Raisin in the Sun, so too did the outlook of many straights after they caught The Boys in the Band. Some whom I personally know felt terrible and – I saw this happen- actually changed the way they treated gays.”

As Filichia expressed, The Boys in the Band proved the power of representation in entertainment both as inspiration for those marginalized and as compassion-machines for those ignorant to the strife of others.

The play has continued to live on with major success well past the 1960s, with several Off-Broadway revivals through the 2000s to the first Broadway premiere of the show in 2018, which garnered the Tony for Best Revival, and culminating in the news of Ryan Murphy producing a film adaptation for Netflix in 2019. On the 30th of September, Murphy and Netflix delivered on their promise of a faithful adaptation of The Boys in the Band and made the film available to stream in homes across the world. With an all-star cast including Jim Parsons, Zachary Quinto, Matt Bomer, Charlie Carver, and Andrew Rannells, Netflix’s The Boys in the Band pays homage to its source material and contributes to its legacy by sharing this vital story on a level Crowley could have only dreamed of.

Just as the original play was praised for its thoughtful portrayal of the gay experience, Murphy’s film adaptation tells a story full of authentic moments between a close group of gay friends. One of the most apparent elements of the film that allowed for these genuine snapshots is the choice of a slower pace. The majority of The Boys in the Band film’s 2-hour length consists of a party Jim Parsons’ character, Michael, hosts for his friend Harold who is portrayed by Zachary Quinto. The entire event is captured on-screen in real-time, there are no moments deemed too passive to be omitted, and that is exactly what allows for the film to achieve its tonal sense of average everyday-ness. From the explosive arguments to the awkward blocks of silence, the audience experiences everything the group of friends experience, effectively creating a space for empathy. Even if the audience does not always agree with a character’s action, The Boys in the Band illustrates gay characters as fully realized, 3-dimensional human beings, which is a grace too often not granted to representations of LGBTQ+ community in entertainment.

The Boys in the Band is also successful in representing authentic gay life by having a diverse cast of friends that have their own unique takes on the experiences of life as a gay man. The climax of the film is introduced when Michael suggests the group plays a game in which they all must call the one person they have truly loved in their entire life. As a group of gay men in the 1960s, the task of sharing their love for another man is received as a risky gamble many could only dream of following through with. Intriguingly, some of the men do accept Michael’s challenge and ultimately a diverse collection of gay stories are compiled, granting access to several generally silenced points of view. The first to make a call is Bernard, a black man who had fallen in love with his white friend, who also happened to be his boss’s son, from his childhood days.

Bernard calls his friend, but is unable to reach him and spends the rest of the night drinking in regret. Next Emory, the beacon of optimism in an often somber group, shares the story of his love for a man from high school who was kind to him. Emory eagerly takes part in Michael’s game, but when Emory’s call does not go as planned, his positivity is tested and the audience is allowed to witness the resilient spirit of an effeminate gay man. A third member of the group, Hank, then shares his story. As a closeted married man, Hank shares how he would find ways to have covert relationships with men, going so far as to detailing meeting up with a man in a bathroom stall in Penn Station. This story contains all of the fear gay people experienced, and continue to experience, as the wrong look to the wrong person could lead to fatal outcomes.

Although it is a terrible truth many today would prefer to not be reminded of, another way in which The Boys in the Band conveys a realistic portrayal of gay life is by highlighting the danger that comes with it. Although the United States is currently in a time of crisis when it comes to LGBTQ+ rights and treatment, the 1960s were conceivably much worse. Murphy’s film does its part in reminding today’s audience of the severity that came with gay life during the 1960s. From explosive moments like Alan calling Emory the f-slur before punching him in the face to the nuanced digs the group of friends delivers to one another for the duration of the party, there is a purposeful and constant air of suspense lingering and preventing the audience from forgetting the danger of being openly gay. A danger the cast of characters is not lucky enough to be able to evade, even for just a couple hours.

The Boys in the Band’s Celebration of Gay Life

While the film does not dispute the terror that remains immovable in the psyche of the cast of gay men, nothing is able to prevent this group from enjoying their lives to the best. Easily the most moving moments of The Boys in the Band are found in the joy the group can unearth when with one another. A stellar example of the elation the group can conjure when with one another arises when Martha Reeves & The Vandellas’ “(Love Is Like A) Heatwave,” plays from Michael’s record player. The group successfully removes themselves from their difficult reality and enters a new reality of their very own. A joyous, celebratory gay reality where they can dance together and lip-sync along to whatever song they want without fear of making themselves too vulnerable to malice or hatred.

Related article: Must-Watch: ‘I Am Jonas’ Is The French Romantic Drama That Forces You To Feel

The final outstanding feature of this film is its focus on queer people uplifting and supporting one another. Although there is a large chunk of this movie that is made up of impolite behavior and vulgar remarks between the friends, it all leads back to the same message of the resilience of the gay spirit. Even after a long night of brawls, name-calling, and drunken arguments, no one leaves the party alone. When the party ends and Michael falls to the floor, sobbing over the mistakes he has made, Donald is there holding him, reassuring all will work out. The Boys in the Band focuses on the reality of gay life, and it’s not always pretty, but as the legacy of the source material clearly indicates, it is unbreakable.

It is easy to get sucked into this film and forced to be a part of the group of friends playing the excruciating game. We, as audiences, end up thinking of that one true love and what we would say if we dared to call them. Would we even dare to call and who would it be exactly? This film may have made outside society aware of the trials and tribulations faced by the gay community. But, it does far more than just that. It makes LGBTQ men and women themselves aware of the war they fought/fight within themselves on the road to the greatest victory, that of self-acceptance of their own sexuality and their romantic love. Now that is the one victory that everyone must enjoy for a truly happy life.