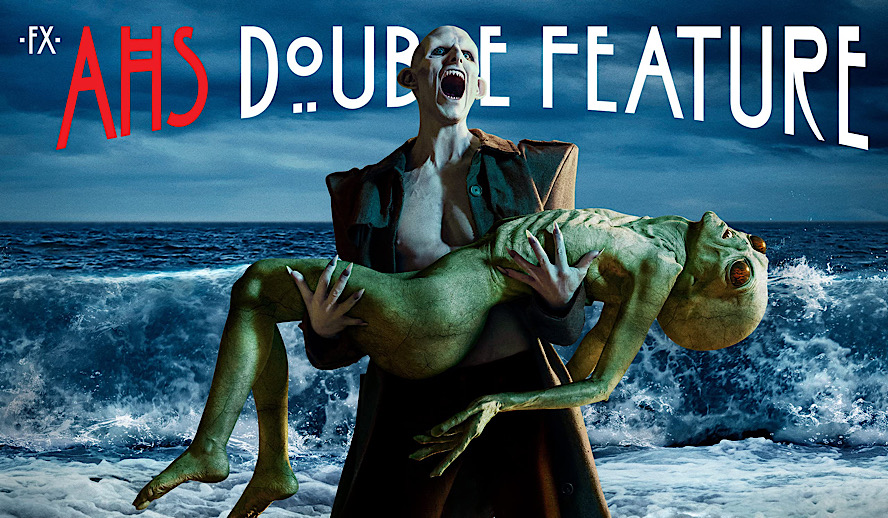 ‘American Horror Story’ is a show that comes with expectations. By now, 10 years and 10 seasons into the show’s run, fans have a general idea of what each season is going to be like. A cast filled with a mix of new and returning actors, a setting with something ominous going on behind the scenes, and a whole lot of supernatural or mystical elements at play. Every season is different than the one before it, giving each season that true anthology scary-stories type of vibe that make the show popular.

But with this season, titled ‘Double Feature’, series creators Ryan Murphy and Brad Falchuk have opted to do something unusual. Instead of focusing on one season-long story like they have in the past, ‘Double Feature’ is split up into two separate parts, similar to the double features that were common in movie theaters throughout the mid-20th Century (hence the season’s title). The first part takes place by the sea and is called ‘Red Tide’, and the second part takes place in the desert, titled ‘Death Valley’. With this 10 episode season, the former will take up the first 6 episodes and the latter will encompass the last 4. Sounds like an intriguing concept. So, with the release of the first two episodes of ‘Red Tide’, “Cape Fear” and “Pale”, does it hold a candle to the show’s previous seasons? Thankfully it does, and it takes ‘American Horror Story’ in a new direction that should catch the interest of any fan of monster-movies or classic horror Cinema.

Note: This is only a review of the first part, ‘Red Tide’. ‘Death Valley’ will premiere on FX later in the year.

A Recap of “Cape Fear”

‘Red Tide’ takes place in the small beach town of Provincetown, Massachusetts during the winter months when it’s devoid of its usual crowd of tourists and beach-goers. In “Cape Fear”, screenwriter Harry Gardner (Finn Wittrock) moves his pregnant wife Doris (Lily Rabe) and daughter Alma (Ryan Kiera Armstrong) into the town with the hopes of using the peace and quiet to get through his writer’s block. The family is ready for a fresh start, but all positive thoughts are diminished quickly as they begin noticing strange occurrences around Provincetown.

A crazed woman (Sarah Paulson), nicknamed Tuberculosis Karen by the town residents, warns Harry of dangers within the town, and Doris and Alma are later chased through town by a pale man who screeches and growls at them. The police say the town is safe and dismiss the man as an opioid addict, but Harry and Doris can tell that something else is at play. The couple decide to leave, but not before Harry is convinced to take a mysterious pill to cure his creative block by one of his new writer friends, Austin (Evan Peters).

It’s a decent cliffhanger that leaves you wondering what’s next for Harry, who’s desperate to end his writer’s block and finally finish his pilot script. “Cape Fear” sets up the story well and raises questions that need answers, but doesn’t do much more than that. The pilot is serviceable, but could’ve used a bigger kick to key the audience in on what’s to come and why they should return for Episode 2. Even if it’s just the beginning, there needs to be something that could turn the season from “intriguing” to “compelling”.

In the second episode of the season, “Pale” picks up the pace by immediately showing the consequences of Harry taking the mystery pill. In an instant, everything is clear to him. He abandons his plans of leaving the town and goes back to his home, writing page after page of the pilot he struggled so much to finish. Doris wants to support his career but doesn’t want to stay in Provincetown any longer. Harry refuses to leave and feverishly writes his best work yet. But also begins acquiring a taste for blood. Seeking answers, he visits Austin, where he learns that the pill, called “The Muse”, clears the mind of the talented but dehumanizes the talentless into pale monsters, like the one chasing Doris. For the talented who benefit from it, it also gives them an insatiable thirst for blood.

Harry decides to keep taking the pill, despite the strain it puts on his family life. Alma wants to take it as well after seeing her father take it, and this leads to severe consequences. By the end,

Doris goes out on a walk to look for Alma and finds her sitting in the graveyard, blood covering her face, eating a dead animal. The ending here is much more solid, bringing a sense of dread and horror at seeing Alma doing something so sinister. “Pale” does a good job of explaining what ‘Red Tide’ is about and why the audience should stick around to see the end. Harry’s struggle of dealing with the highs and lows of The Muse makes for good television, especially as we see the effects it has on his family life. He changes radically, and Wittrock is great at portraying this Jekyll/Hyde-type personality of a man who was once noble and kind-hearted and has now become unhinged.

Killer Performances and a Classic Premise

The whole cast in general is on their game here. Lily Rabe’s role as the supportive and family-focused Doris grounds the story as she becomes the one normal character the audience can understand and empathize with. Evan Peters and Frances Conroy play famous writers who also take The Muse and later befriend Harry. These two are like a devil on his shoulder and they push Harry further down a dark path, urging him to give in to his bloodthirsty urges. One unexpected casting worth mentioning is Macaulay Culkin as Mickey, a man who lives in squalor but has dreams of being a screenwriter. He feels tempted to take The Muse despite TB Karen’s pleas not to, and he decides to take it anyway. As someone who hasn’t seen Culkin in too many projects, it was a surprise to see him here, but a welcome one. His portrayal of a man in a dark place feels honest, and I hope to see more of the character in the rest of the story.

Overall, ‘American Horror Story: Double Feature’ is off to a strong start. While the verdict won’t be out on ‘Death Valley’ for a little while, ‘Red Tide’ brings a story that feels all-too familiar with a new spin. It’s reminiscent of ‘The Shining’, but with the addition of vampires. With Provincetown, Ryan Murphy turns this off-season beach community into a cold, creepy, terrifying town. While the first episode was bogged down a bit too much in setting up, the second episode feels much more compelling and defining for the season. To any ‘AHS’ fan, ‘Red Tide’ feels like a classic season of the show. 10 seasons in, Murphy still has his groove, and ‘American Horror Story’ seems to show no signs of slowing down anytime soon. ‘Red Tide’ feels like a classic horror story, and with the Halloween season coming up soon, it might be worth getting your horror fix a little early.