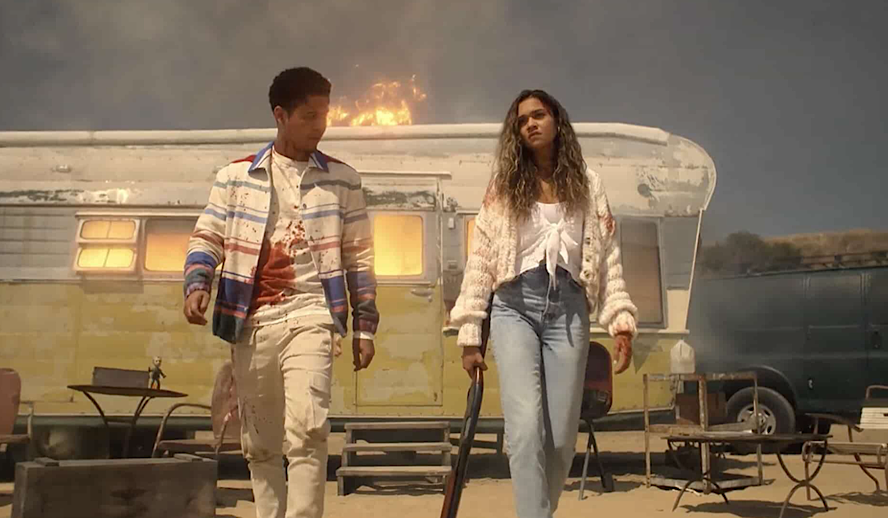 The latest episode of ‘American Horror Stories’, ‘Drive In’, focuses on the urban legend behind many classic horror films, the idea that they are cursed. From the cast of ‘Poltergeist’ all dying after the film’s release to a killer working as an extra in ‘the Exorcist’ and now the in-universe film, ‘Rabbit Rabbit’ causing audiences to turn into rabid killers. The episode follows a normal high schooler couple whose sexcapade at a drive-in is interrupted by the reveal of the film really being cursed, turning everyone who watched the film instead of hooking up, including their friends, into zombie-like killers. The episode offers a fun thrill ride for any horror buff while showcasing why ‘American Horror Story’ might work better in this anthology format.

‘Drive-In’: An Ode to the Horror Buff

From references to Stanley Kubrick’s obsession with aspect ratio to William Castle’s movie theatre gimmicks, this episode is bound to make any fan of old-school horror snap their fingers at the television like Leo in ‘Once Upon A Time in Hollywood’. ‘Drive-In’, focussing on an in-universe horror movie, takes as many liberties as it can to be a love letter to the old horror films that often inspire the hit series.

The story itself, following two sexually confused teens (Rhenzy Feliz and Madison Bailey) trying to survive a night at the drive-in with bloodthirsty zombies, seems like something one would actually watch at an old drive-in theater. At one point in the episode, Rhenzy Feliz’s Chad complains that all horror movies now are either cheap ones they stick on any streaming service (i.e anything on Netflix) or are overly pretentious (i.e anything categorized as “elevated horror” on Netflix). This episode reminds us of the horror movies that don’t fall under either category, the blood and guts slasher. ‘Drive-In’ revels in the disgusting, even showing a man’s privates getting bitten off. The episode smartly also doesn’t explain too much why the movie turns people into killers, diverting away from the “pretentious” horror that would try to overly find logic in the horror, ruining the scare in the process.

The highlight of the episode has to be ‘AHS’ staple, John Carol Lynch, playing the horror movie director, Larry Bitterman (a perfect character name, might I add). Larry Bitterman is the quintessential horror film director; he lives in a trailer, has a Rolls Royce, and his shelves are loaded with horror film memorabilia. Larry provides much of the dark humor in the episode, being both pleased and giddy that he was able to make a film that creates killers, making the most cursed horror film in cinema history.

Larry’s backstory is even perfect for the film’s love letter to horror, with him being the assistant editor to ‘The Exorcist’, which Larry still is mad didn’t win Best Picture. Larry’s obsession with his own work and lack of care over the film’s damage is a clear parody of directors like Stanley Kubrick and Alfred Hitchcock, who would both torture actors and crew for the sake of a “good scare”. Larry pushes it up a notch, not only torturing his actors for a good scare, but torturing the audience and later the world.

‘American Horror Stories’ – Spoilers: What Does the Ending Mean?

‘Drive-In’ ends similarly to how many of the horror films it pays homage to ends, it should practically have a “The End?” slugline slapped over the credits. At the end of the episode, after killing Larry Bitterman, our heroic couple finally has sex. Killing the villain and then having sex, if that isn’t the quintessential old-school slasher ending then I don’t know what is. While they have sex though, it is revealed that the cursed film is now streaming on Netflix, meaning that the whole world can watch it. We then see out the window, where explosions and chaos are already taking place.

This ending works well for a few reasons, acting as a funny callback to Chad’s comment about all the bad horror movies they dump on streaming services and acting as a genuinely interesting ending. The callback to Chad’s comment about bad horror movies acts as a good dig at Larry Bitterman, who despite seeing himself as an auteur genius, might really be on the caliber of bad straight to streaming horror movies. If Larry’s film wasn’t cursed, would it even be any good? This ending also shows that the protagonists didn’t really save the day like they had hoped, that when they are done having sex they are in for a rude awakening. It’s the classic twist ending where the bad guy, despite dying, really has the final laugh, winning in the end.

Does ‘AHS’ Work Better As An Episodic Anthology?

Many critics and even fans seem to have the same criticism of previous seasons of ‘American Horror Story’, that the first couple episodes are really good but then the series falls off around episode four. Each season starts with such a strong and interesting concept but as the episodes go on, they divert further and further away from the original premise of the pilot. This is why many were excited about this spin-off, working like the horror anthologies that came before it like ‘The Twilight Zone’ and ‘Alfred Hitchcock Presents’, where each episode will be different. While the first two episodes of this season, ‘Rubber Man’, is a two-parter, one can still argue that in true ‘American Horror Story’ fashion that the first part was better than the second part. ‘Drive-In’, on the other hand, really showcases the benefits of the episodic anthology.

‘Drive-In’ as a concept wouldn’t work as a whole season, since it would quickly divert away from the interesting premise and become just another zombie survival story. Having this story for just one episode, similarly to the best episodes of ‘Twilight Zone’, lets the audience really appreciate the premise and execution alone. The format of this season also gives other creators besides Ryan Murphy a chance to really shine, getting a chance to tell their own scary stories similar to sharing scary stories by a campsite fire, with the writer of this episode being Manny Coto. This means that ‘American Horror Stories’ has room to tell as many different horror stories as it wants, exploring both different tones and different horror subgenres.

‘American Horror Stories’ is off to a promising start and the third episode, ‘Drive-In’, is proof of that. The episode acts as both a love letter to all the old school horror films that inspired ‘American Horror Story’ and a love letter to all the horror buffs who have supported the series for all these years. The episode also showcases the benefits of having ‘AHS’ as an actual anthology, where not only every season is different but every episode is also different. ‘Drive-In’ is a must-watch for any fan of horror and anyone who appreciates a classic gorefest.

‘American Horror Stories’ is available to stream on Hulu