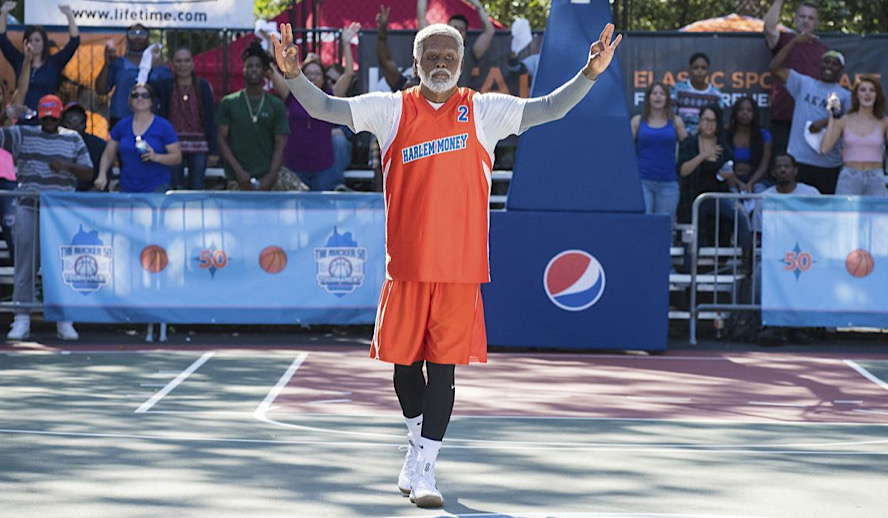 In 2012, a Pepsi commercial came out where we were introduced to Uncle Drew. The spot began with Drew pulling up to a local blacktop basketball court in Bloomfield, NJ, talking about how “these young ballers out here got all these cheap headphones and all this rappity hippity hop, all these flashy shoes. These guys don’t practice the fundamentals anymore.” And that’s what Drew was there to do, show these “young bloods” what the game of basketball should look like.

Drew’s nephew brought the old man into the game, but he had a slow start. Like a switch turning on, Uncle Drew quickly took over the court. After building an audience and dominating everyone out there, he looked to the camera and said “it’s too easy out here against these young bloods.” Seemingly, that was the commercial. Cut to: a reveal of who Uncle Drew really is.

Related article: How The Weeknd Revolutionized Integrated Marketing to Become the Biggest Artist in the World

Seven-time all-star, two-time All-NBA professional basketball player, Kyrie Irving. On behalf of Pepsi Max, Kyrie Iriving transformed from the 19-year-old rising star he was to an old head with glasses and a gut; but that didn’t hinder his skills. In a brilliant ad campaign for Pepsi, this commercial for Pepsi Max soda ended with its tagline, “a zero-calorie cola in disguise.” This five-minute advertisement, written and directed by Kyrie Irving, quickly gained internet traction and Pepsi turned the commercial into five film-style episodes, adding in Uncle Drew’s NBA and WNBA friends in each one, with the storyline of Drew getting his old team back together. The amount of praise and fandom this raised ultimately led to the production of a feature-length ‘Uncle Drew’ movie, about the titular character similarly on a road trip to get the old band back together, with the collaboration of PepsiCo and Temple Hill Entertainment.

A 19-year-old Kyrie Irving at the time of the Uncle Drew x Pepsi Max release, had worked on a broader ad campaign previously with the company. The marketing team saw a star in him that wasn’t just on the basketball court, and figured that if he can sell seats, merchandise, and memorabilia, why couldn’t he sell soda? Furthermore, since Pepsi had marketed their new no-calorie Pepsi Max as “cola in disguise,” claiming that it did not taste like a zero-calorie drink, they chose to keep the theme of disguise and dress up one of the most exciting young NBA players who was known for his flash, as an old man using makeup and prosthetics. This old man was there to preach fundamentals and trash-talk the younger players and show them the way the game is meant to be played, coining his phrase “don’t reach young blood.”

Although the videos were spearheaded and funded by Pepsi, each segment was a Kyrie Irving film. Irving was an integral part of the creation of this campaign, writing and directing the stories and bringing in his real-life friends along for the ride. That was what made the campaign so successful: they were less-so ads and more-so short films. Other than the intersected shots on the fans drinking Pepsi Max, the commercials did not feel like commercials because PepsiCo was not pushing a product to the consumer. Instead, they were taking them on a fun ride and subliminally linking the excitement of basketball, of Uncle Drew, with the feeling of drinking Pepsi; that is brilliant marketing.

After each Kyrie Irving film, Irving would show us him and his teammates sitting in makeup chairs for hours as they were completely transformed into old, disheveled, grumpy old men and women. For Drew, his character design was complete with white hair, a white beard, and a big belly that stayed hidden in the full tracksuit that he tucked into his knee socks. The illusion of Uncle Drew became a worldwide phenomenon and even became Irving’s NBA-adopted nickname. The more popularity that each episode brought, the bigger the spots, and the name of Uncle Drew, became.

In the second episode of Uncle Drew, he met with Hall of Famer Bill Russel, who told him that he had to put his old team back together. Next thing you know, we were following Drew as he road-tripped across the blacktops of the US, finding and hooping with the real-life stars of Kevin Love, Nate Robinson, Maya Moore, Baron Davis, and Ray Allen, not to mention the feature of comic JB Smoove. The already viral campaign kept growing with its ensemble that brought excitement to every NBA fan ever-eager for a new segment to come out.

The first Uncle Drew x Pepsi commercial acquired 52 million views on Youtube, influencing a wave of fans, most of which didn’t even know they were being marketed to. They were just enjoying the content, engaging with sponsored ads like they would with professional media. Including all five segments of the Kyrie Irving films, the entire campaign has over 100 million views on Youtube and remains fresh and engaging even nine years later. In fact, those millions of views and the craze about the concept of Uncle Drew led PepsiCo to consider a big move, bringing the character and fanbase of their titular character to Hollywood, making a feature film, and turning Kyrie Irving into an all-around, multi-platformed superstar.

In 2018, Irving, in his hair, makeup, and prosthetics, took his blacktop presence to the big screen with the theatrical release of ‘Uncle Drew.’ Produced by PepsiCo and with the assistance of Temple Hill Entertainment, the movie was verifiably successful, with a budget of $18 million and ultimately grossing $46.5 million at the box office worldwide.

The film’s plot took on a similar storyline to the original ad campaign but decided to steer away from precise continuity. ‘Uncle Drew’ centered around Irving’s character being pulled back into basketball by Lil Rey’s Dax, a kid whose skill had never matched up to the passion of his game. After he was left by his wife (Tiffany Haddish) and kicked off of his tournament team, replaced by NBA star Aaron Gordon as Casper, he brought on Uncle Drew to get his old crew of aged players to win the tournament and put a little light back in Dax’s life.

Drew’s team was packed with former NBA and WNBA superstars, including Shaquille O’Neal, Reggie Miller, Nate Robinson, and Lisa Leslie. Along for the ride were also Chris Webber, JB Smoove, Nick Kroll, and more. The movie, relying on its star power and basketball acumen, didn’t offer the most robust storyline. Still, it was a fun ride with decent laughs and leaned heavily on the perceived age difference and play styles of old versus new basketball and its players.

A box office and audience success, ‘Uncle Drew’ made for a solid comedy for the whole family, being able to appeal to a vast array of generations. Even six years after the initial craze of the Uncle Drew ad campaign, Pepsi was still able to monetize the IP and character creation while trusting an NBA player with no acting background, along with a large professional athlete ensemble, to fully carry a Hollywood movie. For the athletes and executives to pull that off is a success in and of itself; even the cult classic ‘Space Jam’ relied on the brilliant voice acting of the Looney Tunes.

The path from silver screen and internet commercials to becoming a Hollywood hit is one that has not been shared by many, so when phenomena like this occur, they are truly special and must be treated as such. Kyrie Irving is now leading the Brooklyn Nets in the 2020-21 NBA season playoff run, so it’s time to see what Uncle Drew can really do — hopefully, the young bloods don’t reach.