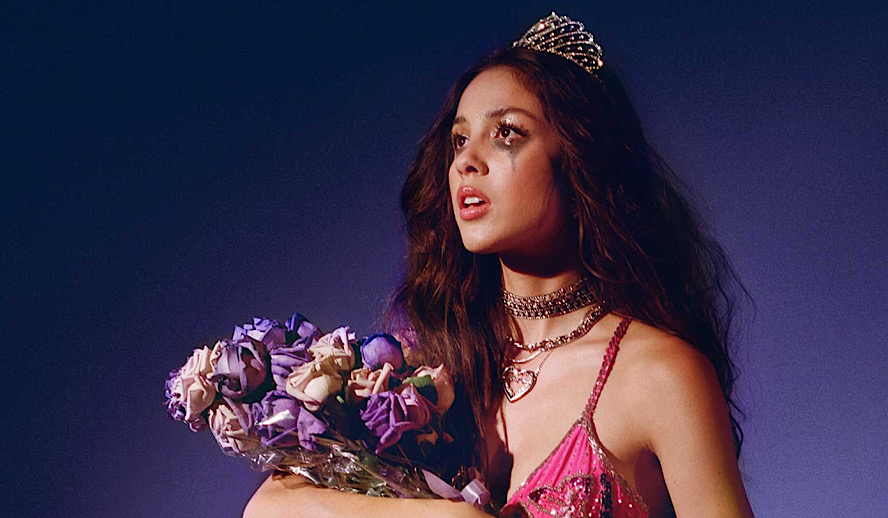 Following her success on the Disney+ original series, ‘High School Musical: The Musical: The Series’, Olivia Rodrigo released her debut album ‘SOUR’ on May 21, 2021. The album includes 11 tracks. It was recorded in isolation during the COVID-19 lockdown. Originally, the album was planned to be released as an EP but was expanded to a full-length album due to the virality of ‘Drivers License’. The cover artwork has Rodrigo standing in front of a purple background with her tongue sticking out with stickers that spell out the word “sour” in capital letters while other stickers cover her forehead and cheeks.

Rodrigo explained that ‘SOUR’ explores the perils and discoveries as a 17-year-old, with the album title referring to emotions that young people experience but are often criticized for such as anger, jealousy, and unhappiness. The album’s sounds are a conglomeration of pop, folk, and alternative rock. It was inspired by artists like Taylor Swift, Kacey Musgraves, No Doubt, and the White Stripes.

The album received critical acclaim upon release. Many critics highlighted Rodrigo’s musical versatility, honest lyrics, and its appeal to Generation Z. During its first week, the album garnered over 385 million streams on Spotify. It broke the global Spotify record for the biggest opening week for an album by a female artist. ‘SOUR’ made it atop the Billboard 200 chart. It spread rapidly on social media platforms like TikTok and Twitter.

The film opens with a static shot of a house with a man walking in front of it while the opening credits appear in purple and white text. A white limo pulls up to the front of the house and takes Rodrigo to prom. On the way, Rodrigo delights us with a dreamy and brand new mash-up of ‘Happier’ and ‘Deja Vu’ aided by guitarist Liv Slingerland. The pink, purple, and blue colors in the background of the limo create a kaleidoscope effect that has viewers mesmerized.

Once Rodrigo steps out of the limo, viewers enter the prom scene with the singer greeting friends and fellow prom-goers. ‘Brutal’ is the first song we see Rodrigo perform with dancers surrounding her. Flashing lights are on beat with the drums and the guitar being played.

After her performance of ‘Brutal’, ‘Traitor’ is performed live for the first time. The song is currently the fourth-most streamed song on the album on Spotify. Many fans were anticipating the live performance of this bedroom pop ballad. The singer walks through pairs slow dancing on the dance floor as she sings the song. Once the song picks up, Rodrigo has dancers interacting with her.

The mood quickly shifts as Rodrigo performs the alt-pop song ‘Jealousy, Jealousy’. The camera follows her as she sings the song in a dizzying circle. Once the song finishes, the singer runs out of the venue and finds solace in a darkroom. She checks out the photographs that are hanging on display. She grabs an acoustic guitar and begins to sing a simple yet beautiful live rendition of ‘Enough For You’.

The pop singer walks out of the darkroom and works her way to a football field with a snippet of ‘Favorite Crime’ playing in the background. She puts on a jacket and performs her viral hit ‘Drivers License’. The light goes out and a marching band appears. The concert film ends with a bang, Rodrigo’s other viral hit ‘Good 4 U’ with a crowd cheering in the background. The singer becomes surrounded by her friends: Iris Apatow, Conan Gray, Madison Hu, and Lydia Night. The singer walks off with them arm-in-arm with their backs facing the camera as the screen gradually turns black.

The Artistic Side of ‘SOUR Prom’

The concert film has 1980s-inspired performances of songs from her debut album along with vintage and pop-punk vibes of the film in its entirety. The mood shifts with each performance. The ‘Happier’ and ‘Deja Vu’ mash-up has viewers immersed in a dreamlike state. ‘Brutal’ and ‘Jealousy, Jealousy’ have viewers feeling angst. ‘Traitor’, ‘Enough For You’, and ‘Drivers License’ have viewers feeling sadness, anger, and heartbreak. ‘Good 4 U’ has viewers feeling relief and also has them jamming out to the pop-rock song.

Sending Fans Into a Frenzy

While ‘SOUR Prom’ premiered on YouTube, it was live-streamed and had fans eager to see what the teen pop sensation had in store for them. Fans expressed their reactions on Twitter. Most of them praised her vocals and visuals. Many are saying this project solidifies her as the breakout star of 2021 and a Best New Artist nominee for the Grammys. Many expressed their disappointment that the teen pop singer didn’t perform ‘Favorite Crime’, ‘Hope Ur Ok’, and ‘1 Step Forward, 3 Steps Back’. Overall, fans were impressed with the concert film but more so with the production value and Rodrigo’s live vocals.

Behind the Scenes of ‘SOUR Prom’

T-Mobile released a behind-the-scenes video on YouTube for Olivia Rodrigo’s concert film. The video opens with interviews from cast members with most of them saying they never attended their own prom or they didn’t feel like themselves at their prom. Rodrigo said she got the idea for the film from looking at a photo on Pinterest. The football field sequence was filmed and rehearsed at the University of Southern California or USC for short.

It’s clear that Rodrigo and her crew put a ton of effort into ‘SOUR Prom’ to make it a concert film that we’ve never seen before. The overall vintage vibes and killer performances make it stand out amongst other concert films out there. What’s notable is how this further solidified the teenage singer as the future of the pop music industry.