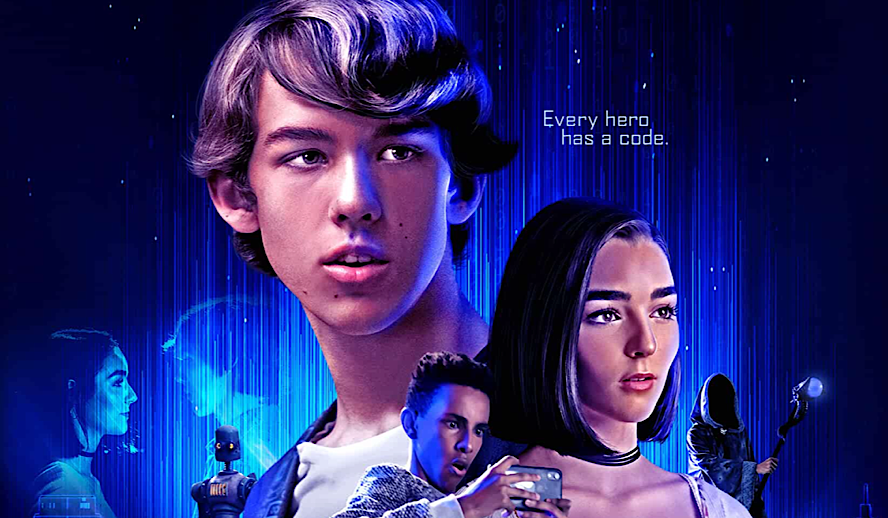 In the world of ‘Hero Mode,’ superheroes don’t wear capes. They don’t fly or shoot lasers; they code — specifically, they code video games. This family-friendly film encapsulated the recent cultural shift and obsession with video games, literally taking the viewer into the game building and the minds of the coders, almost like a new era of ‘Tron.’ The little kid and the gamer in me, who are pretty much one-in-the-same, were full of anticipation and giddiness watching a brand new video game be created right before my eyes. This is a review of ‘Hero Mode.’

Related article: A Tribute to Richard Donner: Father of the Modern Superhero Movie

Troy Mayfield is a high school kid who happens to be a prodigy coder, obsessed with all things video games. His parents own a video game company called Playfield, but at the moment we get introduced to them, we know that they have been trying to keep him away from the family business in order to give him the normal life of a high school student. Although, when Troy accidentally loses an angel investor for his parents’ company, sending to it the brink of bankruptcy, Playfield’s last resort is to hire the kid prodigy to code a new game and beat their competitor at the upcoming video game convention: Pixelcon. Along the way, Troy struggles with new and old relationships alike and learns to follow in his dad’s footsteps and work as a team instead of being the lone creator he always has been.

While the story is largely focused on being about video games, meant for gamers to enjoy, it does not shy away from bringing emotional weight behind each of the main characters’ actions. With clear and substantive driving forces, it allows the viewer to really relate and empathize with the underdog team that we are watching compete to save their company, and for them, their family. Troy, for instance, lost his dad when he was just a kid, giving context for his love of coding and his special gift as a unique connection he has left with his dad. In addition, his mom, and the CEO of Playfield, Kate, has multiple sclerosis (M.S.), struggling to run her company, let alone take care of her own health.

Jimmy plays the opposition to Troy, a semi-washed-up coder who doesn’t take it well when he finds out he has to work for a kid. He struggles with his own relationship with his father who has no respect for the work he does, treating him like a child because he chooses to create video games instead of selling real estate. All of these arcs impact the story and push the plot along, and most get redemption by the end. Although, the real power of this movie comes from the choice to not only be let the audience into Troy and the other characters’ hearts, but to let us into their minds, literally letting the viewer see how they visualize their love of coding, getting to watch them build a new type of video game.

The Power of Immersive Storytelling

The plot and story were not the shining stars of this film. Rather, it was the masterful and careful details of the filming, editing, and graphic design works that were inspired. Somehow offering new takes on the already oversaturated world of video games in real life, the thought-out and built-out game creations and designs clearly showed a passion and knowledge for what a gaming audience would appreciate. This is a credit to director A.J. Tesler, editor Dan Flesher, cinematographer Jonathan Hall, and the special effects team headed by James Gott.

In my interview with A.J. Tesler, I asked him what the biggest challenge was in creating this film. He responded, “One thing that was a challenge about this movie was we didn’t just have to make a fun and entertaining film, we also had to invent four games from scratch. We had to create a visual world to express what was going on in Troy’s mind, and we wanted to do it in a way that paid respects to the gaming worlds of yesterday and today. So we designed a lot of it in unreal gaming engines but with nods to games that were popular in the 90s.”

One way that the film lets the viewer know when we are entering Troy’s mind, into the world of gaming creation, is when the aspect ratio widens. Tesler added, “One of the first things I brought up to Jonathan Hall was the idea of shooting everything anamorphic and then swapping to a more typical aspect ratio. We use that device throughout the movie to give the sense that when Troy is creating, he can see even more of the world.”

When the viewer notices the aspect ratio shift, it is almost like our eyes and our minds widen with it, as we are transported to a world where the possibilities are endless, and the only thing that we have, the only thing that Troy has, to keep him going is his imagination. That is truly something special: to teach kids how powerful their minds are, showing them that there is more than one way to see and understand something; it’s genuinely empowering to their growing and changing minds.

Whenever Troy gets into his mode of creating, the electronic and energetic score rushes in, and the camera movements zoom in and spin around him, taking the viewer along for a rollercoaster-like ride through his imagination. We see what he sees, not the 1s and 0s of coding, but the creations and worlds that he builds in his head. Contrasted with the fairly straightforward cinematography in the more grounded moments, of a student going through the not-so-typical problems of a high schooler, the game creating and coding scenes also play a big part in keeping the viewer engaged, giving them more to look forward to in the third act.

The story of ‘Hero Mode’ is not without its corniness, but that is the cornerstone of most coming-of-age stories. In order to connect with the audience that this movie was clearly made for, not every story beat can be convoluted and brainy. Stripped-down messages and plot points are used for the very purpose of being understood by a mass audience. The heart of this film preaches teamwork — just like Troy’s dad said, once he closed his mouth and opened his ears, that’s when things came together and when he was finally able to find success.

To me, this was a new generation version of ‘Spy Kids,’ a film that shows a dramatized look at what a kid’s dream would be. In the case of  ‘Spy Kids,’ to be a superspy, but in this new generation of ‘Hero Mode,’ to be a world-class gamer and even game creator. A movie that leans into the corniness that truly is any person’s coming-of-age story, the film uses color and image and special effect creation to show, not tell, a fun and inventive tale.

Although the plot points may have seemed unoriginal, the movie creates so much originality in terms of their gaming, paying homage to the origins of the video game world, and even paving the way and creating new ideas to fully immerse the viewer in the ‘Hero Mode’ universe. As a 23-year-old whose video game extent starts and stops with NBA 2k, I thoroughly enjoyed this flick, and there is a little bit of something in it for everyone. This is a great movie choice for families to get together and watch this weekend, especially if any one of them considers themselves a gamer!