A Musical ‘The Prom’: Love Wins In Celebration of the Year with Meryl Streep, Nicole Kidman | Must-Watch 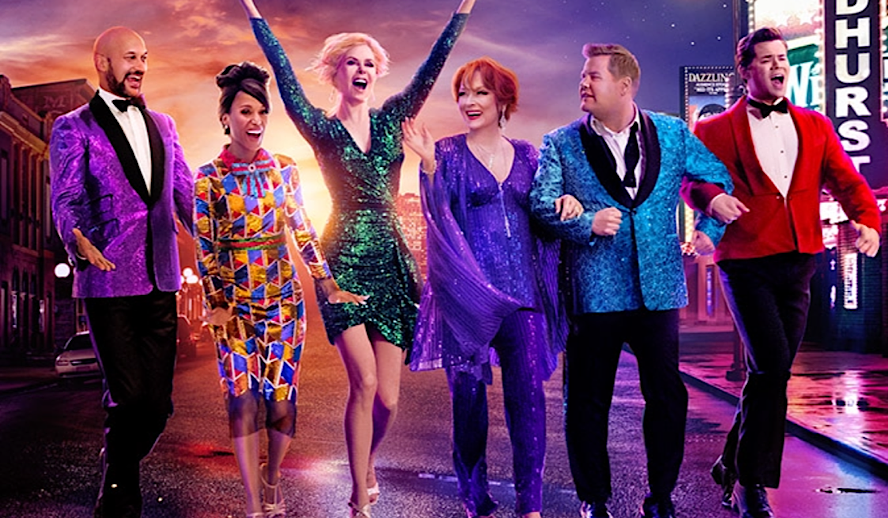 2020 has been an extraordinarily difficult year to celebrate. Atop a pandemic and political dysfunction, lovers of entertainment have lost the escape movie theaters and Broadway shows had regularly provided. As curfews dim the once festive city lights, audiences have searched for inspiration for celebration during a humdrum holiday season. The power of film has been cemented once again as Netflix’s newest original film, The Prom, proves entertainment’s capability to evoke joy in even the most discouraged viewers. The movie is an adaptation of 2018’s Tony-nominated show of the same name and chronicles four fame-declining Broadway stars who decide to flock to the aid of a lesbian teenager who has been denied attendance to her high school prom due to her sexuality, in a performative showing of not-so-selfless altruism. Fighting against a conservative small town, the performers inspire a wave of inclusion and warm their own entitled, self-serving hearts as they create a new prom for the ostracized high schooler.

‘The Prom’ – A Must-Watch Musical

The task of adapting this modern and politically aware musical could only be handled by a seasoned director familiar with the LGBTQ+ community’s strife. Netflix exhibited the genius that has afforded them to be at the top of the streaming-chain as they called on the trailblazing Ryan Murphy to retell the story of queer liberation in a small Indiana town. Murphy is no stranger to adapting queer stories as he delivered on the highly anticipated reworking of the historic LGBTQ+ stageplay, The Boys in the Band, in which gay love is both explored and acclaimed.

Murphy has long been a champion of gay representation in media as he regularly shares queer stories in his series such as American Horror Story and this past year’s Hollywood, which fantasized a world in which LGBTQ+ people could liberate themselves from the oppressive chains of rampant American homophobia and embrace their authentic identities in the golden age of Hollywood. Murphy flexes his impressive industry influences as he assembles an all-star cast to pull off his ambitious adaptation of The Prom, compiling A-listers Meryl Streep, Nicole Kidman, James Corden, Kerry Washington, Keegan-Michael Key, Andrew Rannells, and Tracey Ullman to tell the uplifting and progressive story. Together, Murphy and his star-studded cast effectively bring the Broadway hit to the screen and celebrate queer life.

Conveying all the magic and jubilance of a Broadway musical is a strenuous task, as directors are often unable to capture the factors that make the experience spectacular. Murphy was successful in making The Prom a triumph by utilizing the classic queer art of camp and infusing it into all aspects of the production of the film, from costuming to sets and choreography. From The Wizard of Oz to any Lady Gaga music video, camp, a style initially defined by the Oxford English documentary as “ostentatious, exaggerated, affected, theatrical”,  has been an essential tool in creating gay joy. Camp finds its way into the most detailed fabric of The Prom, composing its queer and delightfully ornate DNA.

The foremost use of camp is apparent in Murphy’s set designs. Opening on a bright and bustling New York City Theater District street, the blindingly mesmerizing backdrops accurately signal that The Prom will be a show-stopping visual splendor from start to finish. Aside from fantastic metropolitan settings, Murphy cleverly utilizes seemingly mundane sets like malls and principal offices, transforming them into marvelous wonders as the characters break out in disarming musical numbers throughout the Indiana suburb.

Additionally, Ryan Murphy’s The Prom has a campy control of color direction, consistently costuming the four performer protagonists (Streep, Corden, Kidman, and Rannels) in complementary striking colors. Streep often rocks a bold red, and Corden striking blue, constructing a semblance of the queer rainbow iconography in virtually every scene. The brilliant color coordination is routinely built upon in fantastically choreographed musical moments that speak to the very essence of camp. For example, “It’s Not About Me” is a breathtaking number in which Streep’s character ambushes the people of Indiana in a dazzlingly melodramatic performance, conveying both her theatrical prowess and desire to do good if she must. The overstated lighting, ravishing red costume, and extravagant behavior of Streep all culminate in a highly engaging and joyous event that could only be evoked through the utilization of the theatrics of camp.

The finale, “It’s Time to Dance,” is a glorious triumph of camp, combining glamorous sets, sparkling costumes, and elegant choreography. The lyrics speak to the jovial heart of the film,“ Get ready folks ‘cause it’s showtime. Build a prom for everyone, show them all it can be done. If music blares and no one cares who your unruly heart loves.” An upbeat and lively anthem, it is quite impossible to feel unmoved as the group of LGBTQ+ teens and allies take part in a celebration of their identity and existence. If the catchy song were not enough, the several campy aspects of the finale proved that the greatest joys can be conjured in the darkest of times.

An Achievement in Gay Representation

Although it makes for an empowering musical, the reality of proms excluding LGBTQ+ people from attendance has not always been an invigorating one. Homophobia and transphobia are not conquered evils in modern America, perhaps most apparently exhibited in Vice President Mike Pence’s public homophobic stances. Fortunately, in spite of the barbaric anti-LGBTQ mindset, the gay prom movement has been a great success in combatting the ignorant ideology and uplifting the vulnerable queer youth.

As expressed on GLAAD’s website, “More and more LGBT community centers and youth organizations across the country are holding what is commonly referred to as ‘gay proms.’ As during other proms, teens at these events dress up, go out to dinner, and pose for pictures. The only difference is that the participating students are allies or members of the LGBT community… These alternative proms give youth an occasion to enjoy prom in a safe and supportive environment that affirms who they are.” The Prom energetically conveys the efficacy of gay proms, conveying both how they can inspire the queer characters of the film as well as the queer members of the audience.

In addition to promoting the platform of gay proms, an event essential in allowing queer teens to practice self-love, The Prom also shares several sentient stories that both LGBTQ+ and straight viewers can relate to and learn from. This is found in the wealth of storylines pertaining to gay characters struggling in their relationships with their anti-gay parents. For example, Kerry Washington portrays the antagonist of the film, standing staunchly against a queer-friendly prom, unaware that her daughter is in love with her friend, Emma. Simultaneously, James Corden’s character rekindles his relationship with his mother who abandoned him when he came out to her decades ago.

Although both gay characters faced adversity when first coming out, as they continue their brave journey of self-love, their parents learn to overcome their ignorance love their child as they are. As Washington’s daughter learns to express herself and Corden’s mother attempts to make up for the mistakes she made, LGBTQ people learn that there is power in being authentic and conservative parents learn ways to engage with gay people in a way they may not have thought possible. Murphy’s The Prom is a full-blown bash, from the stars to the musical numbers; however, it truly finds its place in film history as it succeeds in proving the undying power of love in the face of seemingly insurmountable obstacles, whether it be homophobia or a pandemic.