The Magnificent Seven: A List Of 7 Essential and Amazing Modern Westerns 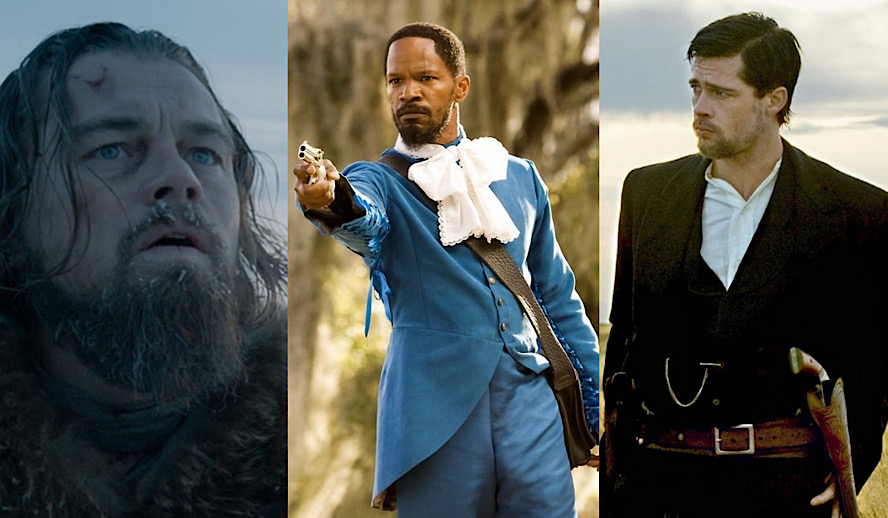 ‘News Of The World’ recently reinjected life into the Western, a genre which is undeniably fading. Some other 21st century films have suggested that there are still stories to be mined in the Wild West despite decreasing interest. The following list will focus on Westerns that approach the genre in a new way, and that came out in the 21st century. They aren’t all set in modern times but they all approach western themes with modern sensibilities (Neo-Westerns, as it were). Thus, great but familiar flicks like ‘True Grit’ and ‘3:10 to Yuma’ have not been considered.

In ‘Slow West’, a young Scottish man (Kodi Smit-McPhee) travels through the American wilderness to rescue the love of his life. Complications ensue.

‘Slow West’ feels different, right down to the premise (you don’t think Scotland when you think Western). It has a simple, familiar story but gets increasingly subversive as it goes along. It contains solid performances, especially by Michael Fassbender as a no-nonsense cowboy. Another distinct feature is the dream-like, beautiful cinematography.

Given its minimalistic plot (which is partly down to the short runtime of 84 minutes), ‘Slow West’ won’t stick too forcefully in the mind – but it’s good company. The characters aren’t meticulously developed, but they are drawn out enough for the climactic ending to work. ‘Slow West’ also has a strange, knowing sense of dark humour that blends well with the occasional tragedy of the drama.

It’s an odd one, but ‘Slow West’ certainly offers a fresh perspective on the genre.

In ‘The Proposition’, an Australian outlaw is tasked with the murder of his reckless older brother in order to save his imprisoned younger brother.

Written and scored by Nick Cave, ‘The Proposition’ contains the soul and brutality you would expect from the man who concocted ‘Murder Ballads’. Its atmosphere is otherworldly – serene and punishing in equal measure. It feels like something of a spiritual cousin to ‘The Assassination Of Jesse James’ and ‘Peaky Blinders’ – both of which owe a lot to Cave’s aesthetic. In terms of renovating the genre, ‘The Proposition’ contains an interestingly novel setting in Australia. This allows for the shocking treatment of Aboriginals to be explored, which is a useful parallel against the depiction of Native Americans in traditional Westerns.

The film has a surprisingly measured performance from Ray Winstone, and Guy Pearce is fantastic.

It isn’t as memorable as the following entries, but ‘The Proposition’ is a captivating mood piece.

Quentin Tarantino’s first overt foray into the Western is a slavery revenge tale spearheaded by the recently-freed Django (Jamie Foxx) and his master-turned-friend, Dr. King Schultz (Christoph Waltz).

‘Django Unchained’ is very fun – it is more of an entertainingly cathartic revenge story than a film about slavery, for better and for worse. Christoph Waltz is incredible as the polite but dangerous bounty hunter. Tarantino’s knack for dialogue is in full-flow –  the Candieland dinner scene, in particular, is gloriously tense. Some credit must also be given to the film’s ability to balance exaggerated movie violence against harsh, more believable brutality, and to know which to employ, when.

On the other hand, the mixture of Tarantino’s brand of filmmaking with the seriousness of the subject matter can be a little off-putting at times. The film is also overlong and filled with unnecessary indulgences such as the director’s own cameo.

‘Hell Or High Water’ is a brilliant modernisation of the genre, telling the tale of two brothers who rob banks to keep afloat.

The three leads are fantastic. Chris Pine delivers a career-best performance as the measured, younger brother whilst Ben Foster is believably manic – their dynamic offers a moving core to the drama. Jeff Bridges is also perfectly cast as the growling, supremely-southern Sheriff. ‘Hell Or High Water’s environment is so realistic – it is a totally engrossing and recognisable world of economic struggle poetically rendered by Mackenzie’s direction and Nick Cave (there he is again)’s soulful score.

The film manages to mix the old with the new – though the usual western archetypes are there, (motivated sheriff, flawed-but-likable outlaws) it has modern sensibilities: there are no heroes or villains, and the common enemy is very contemporary indeed – economic collapse.

Though progressive, Taylor Sheridan’s script doesn’t quite do as much as it could have with the Native American subtext. Still, it does try, which is worth noting.

‘Hell Or High Water’ is a brilliant Neo-Western – thoroughly modern in its setting yet simultaneously timeless in its storytelling.

After a man (Leonardo DiCaprio) is brutally mauled by a bear, he must find a way to survive and avenge a tragic loss.

‘The Revenant’ is an incredibly immersive experience. Iñárritu wraps you up in the world in a completely organic, almost documentary-like manner. The landscapes are absolutely stunning, and the action within them is stunning. The extended, seemingly one-take fight scenes are wonderfully handled, and Leonardo DiCaprio’s gruelling, physical performance is undeniably impressive.

Though its revenge plot is somewhat formulaic, ‘The Revenant’ certainly offers a fresh, visceral perspective.

A man (Josh Brolin) stumbles on some cash from a drug deal gone wrong and is subsequently chased through the American landscape by a brutal hitman.

‘No Country For Old Men’ subverts Western and storytelling tropes expertly. After a while, you are completely unsure of where it is going. It provides a chilling depiction of violence – the random nature of the kills creates a sense of permanent unease. The first two acts are particularly tense – Roger Deakins’ cinematography is stunningly precise. Notably, Anton Chigurgh (Javier Bardem)’s villain is one of the all-time greats – he and the Sheriff (Tommy Lee Jones) infuse the film with philosophical, existential perspectives that elevate the drama.

‘No Country For Old Men’ may be disorienting on first viewing, but it gets better and better the more you revisit it.

Andrew Dominik’s epic drama is a heartfelt and grounded retelling of the events leading to (and crucially, after) the titular killing.

‘Assssination’ has a wonderful sense of poetry, accurately extracted from Ron Hansen’s impressive novel. The film adapts westerns tropes for a more truthful tone. Unlike the traditional Western, the film doesn’t just show death, it is about death. Its portrayal of violence is totally unheroic – awkward, blunt, and often upsetting. The characters are brilliantly three-dimensional – like many of the films on this list, there is an absence of heroes vs villains. Brad Pitt brings his career-best work as Jesse, though Casey Affleck steals the show as Bob Ford – the true heart of the story.

The film is technically perfect – Roger Deakins and Nick Cave do brilliant work in cinematography and music respectively to match the story’s meditative tone.

Some have dismissed ‘Assassination’ for its slow-pace and long length, but it is absolutely worth it. It remains one of the most criminally underrated films of the 21st century.