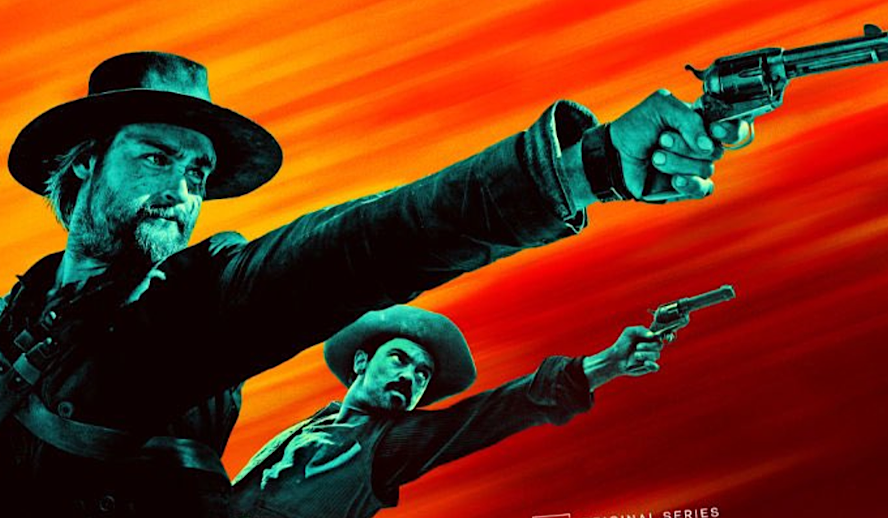 Howard Stark, but Make it Cowboy

Dominic Cooper, who you may recognize for his role in the MCU as Tony Stark’s father Howard Stark, plays another ego, Sheriff McCoy, in ‘That Dirty Black Bag,’ a western drama that premiered on AMC+ this Thursday. Douglas Booth stars across from him as the loner bounty hunter Red Bill. Red Bill, who carries a bag of bounties (literal heads) at all times, and McCoy, a sheriff who feels too good for the ghost town of Greenvale, resent each other from the moment they meet. Meanwhile, town soft boy Steve (Christian Cooke) won’t stop preparing his land for rain that never comes, despite tycoon Thompson’s (Paterson Joseph) offers to buy the dead acres off of him.

It all seems rather straightforward in its first twenty minutes, but as this first episode unfolds each character is revealed to have a secret or demon of some kind. By the end of the episode, when Aidan Gillen’s character joins the story, you know better than to trust his simple attitude. In Greenvale, there’s a lot more bad and ugly to be encountered than there is good.

What Makes a Western

Perhaps arbitrarily, I’ll propose a divide between modern shows that use western stylings to portray western-adjacent stories, and shows that set themselves in the Wild West proper. The former category consists of shows like ‘Breaking Bad,’ ‘Narcos,’ or even ‘Ozark.’ These shows portray a different kind of frontier: the fringes of society. Their characters act outside of the law, and rather than journeying West and surviving new landscapes, they journey deeper into the fringes and adapt to lawlessness.

For the latter, look to shows like ‘Deadwood,’ ‘1883,’ and now ‘That Dirty Black Bag.’ AMC+’s new show, set during the downturn of the California Gold Rush, presents itself as a western through-and-through.

In referring to the Wild West, I mean the vast body of fiction surrounding the colonialist expansion of America’s frontier, especially during the 19th century. Fraught with period archetypes, some nuanced and some antiquated, stories concerning the Wild West have a long cinematic history. As often as the era has been romanticized, its mythos has been subverted and reified. ‘That Dirty Black Bag’ seems to do both.

The American West in ‘That Dirty Black Bag’

The setting of the show–a mining town in decline enclosed by desert and mesas that look awfully similar to those of the iconic Monument Valley (Tsé Bii Ndzisgaii per the Navajo people)–takes up a lot of onscreen space. Like the most iconic westerns before it, ‘That Dirty Black Bag’ makes the vistas of the American West a character all their own. In this case, they serve to isolate the characters from the rest of the world.

This first episode gets right to work establishing a big cast of characters. At times it feels busy and confused, and after watching I’m still not sure which characters the show will follow most closely. Despite the jagged pace, you do get the sense that ultimately all these storylines will matter and find their resolution. This is largely owing to the scenic cinematography. No one leaves the bounds of Sheriff McCoy’s jurisdiction, and the town’s inhabitants and buildings look small against their backdrop.

The show drifts closer to spaghetti westerns than romantic cowboy movies, but is simultaneously less colorful and more dramatic. Episode one features a lot of slamming things on tables, stylized violence, and a range of choose-your-own cowboy accents. Though it features an outcast bounty hunter, a corrupt sheriff, a notorious pair of brothers terrorizing the town, and some truly gritty (get it?) scenes, it has a modern sensibility that reminds me of ‘Westworld’-type shows.

The presence of f-bombs does not hearken back to ‘A Fistful of Dollars,’ for example, and the violent scenes so far fall in the same camp as the cold, horrific violence portrayed in ‘Westworld’ or ‘Game of Thrones,’ which, admittedly, Sergio Leone may have matched given modern resources. Speaking of camp, there’s less of it than in other spaghetti westerns. No dramatic camera zooms, and not quite as much posturing.

Additionally, in its television format, ‘That Dirty Black Bag’ will unfold episodically rather than in the near-operatic manner that spaghetti westerns traditionally do. The character reveals in episode one come across like reveals in a mystery, cliffhangers in an ongoing drama that will interweave all kinds of people, rather than a folkloric tale that happens to feature an antihero. For instance, there would usually not be time for a meaningful moment between the owner of the town’s brothel (Eve, played by Niv Sultan) and anyone outside of the main players, but in ‘That Dirty Black Bag’ we get a peek into her relationships with both Steve as well as one of her girls.

‘That Dirty Black Bag’ does, however, draw inspiration from its predecessors in significant ways. The leading characters swagger about with an aura of invincibility, only to be brought low. A lot of the action takes place in the desert, a saloon, or a mountain pass, including a highly stylized standoff. Red Bill peers out from under his hat brim just like Clint Eastwood and Franco Nero did in their most iconic roles, and many of the characters could fit loosely into archetypes of the genre. If my suspicions upon seeing the ending of the episode are correct, ‘That Dirty Black Bag’ will draw quite a bit from old spaghetti westerns, but will push against the boundaries of the genre more and more as the show progresses.

A brief addendum: if you feel that the episodes of ‘Westworld’ have been too long and ambling (as Kathryn VanArendonk memorably argued in her article for Vulture, “Overly Long Episodes Are the Manspreading of TV”), fear not. The first episode of ‘That Dirty Black Bag’ brims with exposition.

‘That Dirty Black Bag’ will continue to air Thursdays on AMC+. Douglas Booth will feature in Terrence Malick’s upcoming biblical drama, ‘The Way of the Wind,’ and Dominic Cooper will star in Guillem Morales’ upcoming adaptation of ‘The Duchess of Malfi.’