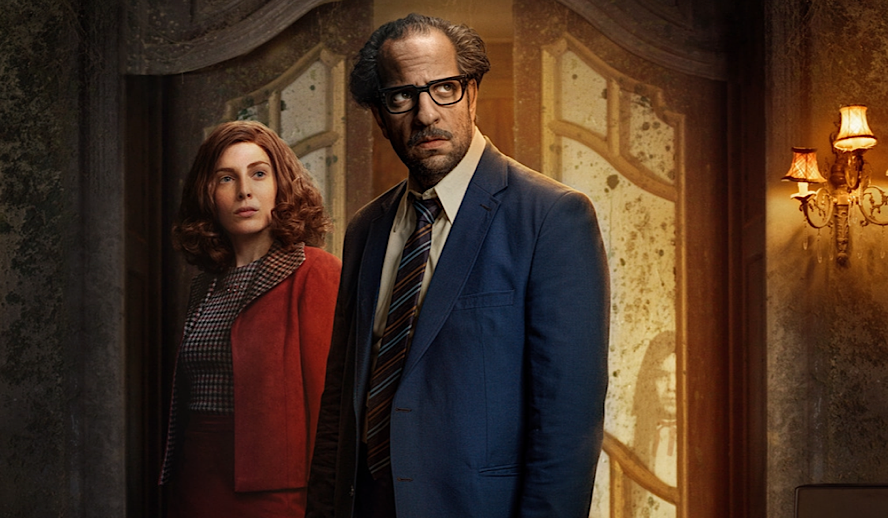 Netflix’s first-ever Egyptian-produced series is now available to stream on its platform. Billed as a supernatural mystery series, it stars a diverse cast including Ahmed Amin and Razane Jammal and is based on the best-selling Ma Waraa Al Tabiaa (“Paranormal”) series of novels by the late Egyptian author Ahmed Khaled Tawfik.

Taking place during the 1960s and ‘70s, Paranormal focuses on its lead protagonist Dr. Refaat Ismail’s (Ahmed Amin) journey into the unknown. Netflix’s logline for the series states: “After a skeptical hematologist is plunged into a series of inexplicable events, he unwillingly becomes the go-to-guy for paranormal investigations.” It’s worth noting that while this description promises a more “case of the week” approach to its storytelling, this statement is slightly misleading, with the majority of the story focusing on one specific ghost, although there are indeed instances of other supernatural beings showcased throughout the season.

Related article: A Tribute To Mads Mikkelsen: How The Delectable Dane Conquered Hollywood

A Familiar Story with a Unique Setting

Taking place primarily during 1960s Cairo, with a few flashbacks along the way, Paranormal follows the story of a cynical doctor and intelligent scholar who, throughout the season’s progression, struggles to accept the increasingly strong possibility of supernatural entities living among mankind. Refaat’s core character motivation is to try to explain away the unexplainable, which he attempts with varying success. This character trait is reminiscent of shows like The X-Files, where one character tries to persuade another of supernatural existence. Paranormal thankfully forgoes the cliched tropes of only the believer witnessing the unbelievable and gives itself just enough originality in its premise to stand out from the many other paranormal-based stories already out in the ether.

The plot, billed as primarily horror-based, surprises viewers with its venture into action-adventure. Episode 5, in particular, is reminiscent of film series such as Indiana Jones and The Mummy, providing fast-paced action sequences, gruesome scenes, and ancient tribal references that at times challenge Paranormal’s advertised genre. While this adventure-based episode admittedly falls short compared to the rest of the show’s offerings (one might argue it could have been omitted altogether), it nevertheless showcases the series’ capability of genre-fluid storytelling.

The season does a great job connecting its episodes together with its overall theme (i.e. exploring the supernatural), and the plot’s structure of having some episodes spotlight their respective supernatural creatures (albeit superfluously at times) does eventually tie everything back to the general lore of the story. While this structure may sound disjointed on paper, and risks confusing viewers with its at times murky central focus, having the subplots eventually tie into the plot almost makes up for the season’s instances of tangents and distracted storytelling.

A Well-Crafted World That (Mostly) Immerses its Audience

While the plot is admittedly bumpy at times, the show’s attention to detail is nearly flawless. The series features beautiful scenery, authentic wardrobe, and time-appropriate props; the automobiles used are especially eye-catching and greatly contribute to the show’s immersion. The use of Cairo’s political unrest adds a strong non-supernatural element to the story as well, providing great juxtaposition between the palpable dangers of man and the lurking threats of the unknown. Characterization is stellar, with Dr. Refaat’s love triangle providing a glimpse into his inner character, showing the audience how the fears and insecurities associated with his love life affect his later confrontations with supernatural forces. The dialogue is believable and grounded, revealing characters’ motives, fears, and desires, and works well in moving the story forward.

Concerning language, the show is streamed to a defaulted English dub over Paranormal’s Arabic dialogue, but it’s arguably much more rewarding to experience the show in its native Arabic language with English subtitles, all of which are options that can be altered using Netflix’s “Audio and Subtitles” settings. Although subtitles will inherently require more effort from the viewer, the reward of complete story immersion is fully worth it (there are instances of English spoken scenes as well). The show’s blend of language, in addition to its diversity and supernatural elements, makes for an engaging viewing experience.

Paranormal’s special effects, unfortunately, leave a lot to be desired. Nowhere near the quality of other Netflix shows like Stranger Things, the CGI used throughout Paranormal is at times laughable and jarring, admittedly sucking the viewer out of the moment. However, even despite its lackluster quality, the special effects do add to the show’s supernatural theme, bringing to life the very things Refaat consistently rejects to be real. When not relying on CGI, Paranormal boasts some truly stunning visual imagery, at times reminiscent of Stephen King adapted films, especially IT, and in certain moments of Stanley Kubrick-esque directing and framing. The series is at its best when it relies less on computer-generated effects and instead showcases its masterful framing, set designs, props, and use of lighting.

‘Paranormal’ Is Unlikely to Scare Horror Buffs, but It’s Guaranteed to Leave an Impression

For horror fans looking for the next great scare, Paranormal is unlikely to offer any true frights, but that was likely never its purpose anyway. While the allure of ghosts and boogiemen may initially draw the viewer in, it’s the show’s expert character exploration that will keep audiences hooked. Concerning horror, it’s worth mentioning that while Paranormal won’t necessarily leave horror fans afraid of the dark, certain episodes do provide genuinely creepy, and in some instances deeply unsettling, moments. Similar in tone to series like American Horror Story and The Haunting, Netflix’s newest addition to the horror and mystery genre has all the right ingredients to appeal to its target demographic, in addition to those simply looking for something new to watch.

Paranormal is by no means flawless and does encounter some speed bumps along its six-episode stretch. However, its aspirational blend of genres, engaging premise, solid performances, and a refreshingly diverse cast make this new Netflix original series a welcome addition to the streaming platform’s increasingly competitive library, and one that will hopefully return with more episodes in the near future.