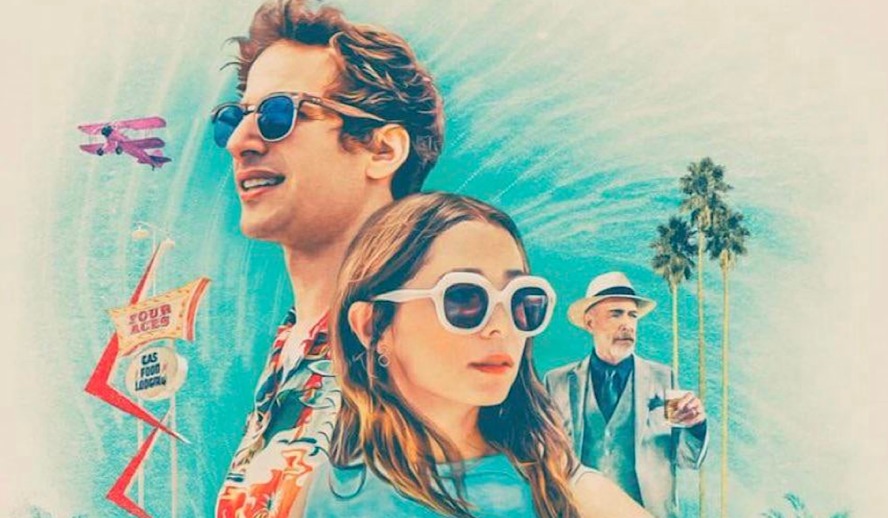 “Today, tomorrow, it’s all the same…” said Nyles, the co-protagonist played by Andy Samberg from Hulu’s  Palm Springs. That about sums up this eclectic tale of Nyles and Sarah, played by Cristin Milioti, who get trapped under mysterious, seemingly scientifically impossible circumstances, and relive the same day over and over again. Max Barbakow’s directorial debut and Andy Siara’s sharp and thought-provoking screenplay were the perfect ingredients for the star-studded cast to materialize the world, bring the characters to life, and bring a wonderful film to the silver screen garnering the most positive reception a film can get. For a story that revolves around a repeated event with the same characters with virtually no evolution, it’s so brilliantly configured that the audience grows connected to these characters, the world has been built so efficiently, and our protagonists have hilarious, silly, and oddly clever fun with almost every bit of it. All in the backburner, while gripping your gut from laughter, there’s a heartwarming romance brewing that imbues a high stakes situation, uplifting the film to be a coming-of-age story about independent/codependent love and the human condition.

The movie has been a hit on Hulu, garnering positive reception from general audiences worldwide. This may be attributed to the world’s historic introduction of Palm Springs, when the film famously broke a sales record at Sundance Film Festival when Hulu purchased it for $17.5 million and 69 cents, the last record being broken by Nate Parker’s The Birth of a Nation. That kind of acknowledgment has been a long time coming for The Lonely Island crew, who have always produced incredible, and comedically legendary content.

But at the pilot seat of this financial milestone that built the entire foundation is Andy Siara, who strategically crafted this classic time-loop trope into an original story about repetition; when carpe diem becomes too much, and how people who desperately need to escape decide what destiny is best for them. The rhythm is tremendous, going from a dark, near-dystopia portrayal of the world, to a palooza of fun with singing and dancing. The most salient story trait overall is the comedy, which makes the casting of the leading man Andy Samberg make all the more sense. There’s not a single scene without a laugh, nor without an important plot point to move the story along.

Cristin Milioti, who starred in hits such as The Wolf of Wall Street and Fargo, superbly plays the role of Sarah, someone with a dark past, with a history of succumbing to her worst instincts. With all the dry, deadpan humor that Milioti does so famously, we see an authentic character with deeply rooted issues that yearns for something better. The wick is there, she just needs someone to ignite it for her, which was a similar issue to Nyles, and together they spark a flame that burns through the laws of physics. Sarah is responsible for many of the unexpected twists and turns throughout the story, and her powerful personality is reflected within the actions of the story, and the ultimate resolution. Cristin Milioti does an excellent job of conveying the emotions of such a complex character undergoing a bizarre experience, all the meanwhile providing some of the most memorable laughs in the movie.

Former Saturday Night Live and Brooklyn Nine-Nine star Andy Samberg shines in this role as Nyles; the depressed, trapped, slacker who has drunkenly slept his way through his time trapped experience, having individual rendezvous with all the characters at the wedding on separate occasions. Nyles is alone in every aspect. His relationship is in shambles, he has no true friends or family, nor anyone he can share his experience with. Through all the silliness and booze, there’s a darkness that surrounds Nyles, and it seems the story has started as he’s meeting his wit’s end with it. That is until Sarah becomes his partner-in-time. Nyles light grows and grows as their relationship evolves through the story, showing that sometimes people in slumps just need an extra push, and work better together than alone.

Samberg’s character shows the ups and downs of repetitions tremendously, soaking up youth and acting wacky. But also there’s heart to it. The character is stuck in a rut, both metaphorically and physically. They have room to grow. Even Roy shows the type of stuckness, needing something to revitalize them. Oscar winner and Whiplash star J.K. Simmons accompanies the cast in an excellent comedic role, showcasing his range that’s kept him on the actor A-list for decades. Overall, the cast is excellent and couldn’t have brought Andy Sarais’s script and Max Barbakow’s vision to life any better.

There are laughs throughout, while a well-paced story keeps the character and plot development moving rhythmically. There are no lulls in the movie, there’s quick enough evolution to keep general audiences glued to the screen until the credits roll. As seldom as it is to see original work that’s at such a high caliber as Palm Springs, the movie is a breath of fresh air, showing that true artists from all over are still championing quality, original art.

The Tightrope of Being Commercially Successful, Critically Acclaimed, and Wholly Original

Many can agree that Palm Springs is undoubtedly one of the best films on Hulu, which has an impressive repertoire. To be able to appeal to critics alike a film must have fundamental elements that reflect the human condition, typically. This film features themes of depression, idleness, love, relationships, and even the meaning of life. To be able to express so much in a comedy is rare, which is what makes the charisma of Palm Springs so magnetic. It’s relatable to everyone, and the comedy is timeless. From physical comedy to witty, clever one-liners, there’s a laugh in every corner. After watching it a few times, you notice more and more, and I even found myself enjoying more the second time around. Being released during the COVID -19 pandemic certainly benefited the film’s ability to garner views, and numbers have shown that it’s been one of Hulu’s most viewed movies since its release in June. Rotten Tomatoes critics rated the film an astonishingly 94% with an 88% audience score, and IMDB rated it a 7.4/10. It is absolutely worth not only watching once but many times over!