Cameo: What’s the Purpose of Creating Platforms for Celebrities to Increase Their Wealth? 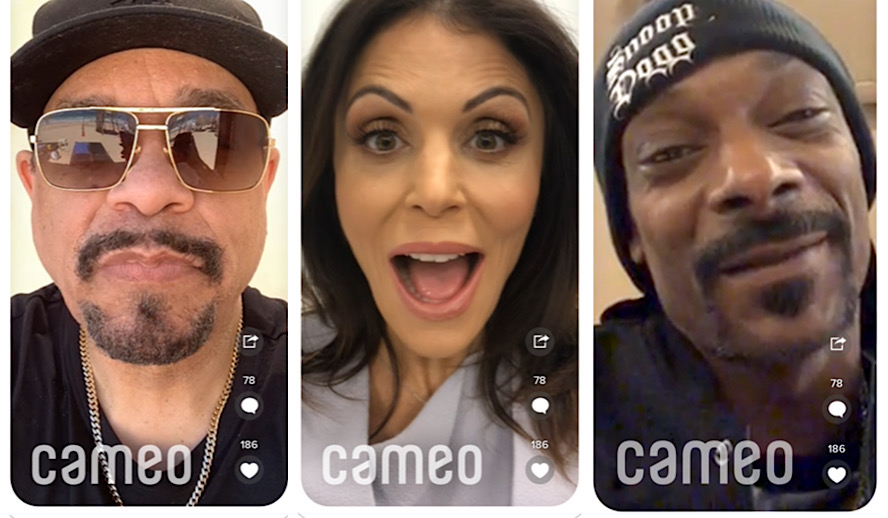 “Cameo” is a website that was launched in 2017 with the goal of creating a platform for celebrities to share personalized videos with their fans. Basically, each celebrity on the website has a fixed rate that they charge for each shoutout video. The rates range from $50 all the way to $400 for these videos. There’s no defined length and stars are free to set their own prices, so there’s little to no regulation on the part of the website. Some celebrities on the platform also offer promotional videos meant to promote a product or business, as well as personal Zoom calls with fans for a higher-than-typical rate.

Cameo’s purpose is to provide everyday fans with intimate access to their favorite celebrities; anyone from professional athletes to reality television stars. Though many celebrities have 5-star ratings on Cameo from happy customers, the website as a whole seems to thrive off of furthering parasocial relationships between celebrities and their fans. It also creates an exclusive platform for already established celebrities to increase their wealth, which, to me, just seems ridiculous. Let’s break down this phenomenon by analyzing what exactly a parasocial relationship is and how it can be harmful.

What is a Parasocial Relationship?

According to Oxford Reference, a parasocial relationship is a “psychological relationship experienced by members of an audience in their mediated encounters with certain performers in the mass media, particularly on television.” Though the term was coined in 1956, it’s becoming increasingly common in popular discourse surrounding internet personalities and their followers. YouTube specifically, has offered a vehicle for people to post personal vlogs and intimate details about their everyday lives to thousands of subscribers. Often, these vloggers utilize the camera as a middleman between them and their audience, addressing the camera directly as a means to communicate. This “direct” form of communication is the main culprit in furthering parasocial relationships, leaving the audience feeling like they are interacting and talking with these vloggers.

On top of this, relatability and openness can make these YouTubers seem like intimate friends who are sharing their most profound secrets with us. Parasocial relationships are completely one-sided, with the YouTubers relying solely on their audience members for both financial and emotional support while in turn giving them a facade of a relationship. Though some research has pointed to parasocial relationships being helpful for people with low self-esteem or trouble with social interaction, the fact of the matter is that these relationships are one-sided. Any relationship that is completely one-sided cannot be maintained in a healthy way, especially when many viewers lack the understanding that the relationship is one-sided in the first place. To sum up, I strongly believe that the parasocial relationship is created and furthered by YouTubers with the sole intention of gaining monetary support from their subscribers by taking advantage of their belief in a nonexistent relationship. Think of it like a friend who only spends time with you when they need to borrow money.

Celebrity Versus Influencer: Where Do We Draw the Line?

So now that we’ve defined parasocial relationships and why they are unhealthy, let’s talk about how social media has blurred the lines between celebrities and influencers. With the rise of Instagram, YouTube, and Snapchat, normal people have been able to gain and influence massive amounts of people. Though typically these influencers have a pre-established niche that they cater to, many of them have found their way into mainstream celebrity culture. For example, Shane Dawson on YouTube, Nash Grier or Shawn Mendes from Vine, and even Huda Kattan from Instagram, to name a few. These “normal people” have used social media to their advantage, gaining tens of millions of followers in the process.

Recently, however, an interesting phenomenon has begun to take place that shows the exact opposite of this happening: mainstream celebrities who became famous from their entertainment careers have been transferring to social media to connect with their audiences more. Kylie Jenner, Will Smith, Shay Mitchell, and Paris Hilton all have successful YouTube channels with hundreds of thousands of subscribers each. The cause for their transfer is unknown, but presumably due to a desire for extra sources of income or to have a more direct way to connect with their fans.

This merging of the two different public spheres can have dire consequences. For example, in August 2020, ex-Disney star Bella Thorne joined the creator platform OnlyFans. For those who are unaware, OnlyFans was originally launched as a subscription-based social media platform for creators to offer exclusive access to extra content. Unsurprisingly, it evolved into an online platform for sex workers to create pornographic content, launching many of them into the public spotlight. Bella Thorne joined the platform, teasing nude and lewd content to her Instagram followers. Her participation on the site created a huge scandal (one that I won’t be able to cover fully over the course of this article) but, to sum it up, OnlyFans sex workers were upset that Bella Thorne was using their platform to take away from their income.

This highlights an important distinction in the way we view social media platforms; there are some like YouTube, which is meant for “normal people”, aka not celebrities with pre-existing followings, to post content on. Then there are more traditional platforms, such as network television and streaming services, that feature content created by and starring celebrities. Finally, social media platforms, like Instagram, appeal to both normal people and celebrities when it comes to sharing content. Clearly, there’s backlash when celebrities cross over into platforms that aren’t as accepting of them, such as YouTube, because there’s the feeling that their presence is taking away from smaller content creators who deserve more attention. This argument seems fair, given that celebrities already have existing voices in the mainstream entertainment industry; why do they need to seep into these other platforms?

As I mentioned previously, I have two major guesses as to why existing celebrities transfer to social media websites like YouTube. To reiterate, I believe it’s either to increase their earnings or to create a more direct connection with their fans in hopes of furthering these parasocial relationships. But what if there was a website specifically for celebrities meant to do both? Enter “Cameo”.

Cameo frustrates me because it seems like a blatant attempt for celebrities to capitalize on their pre-existing fame as well as take advantage of their followers’ desire to create parasocial relationships. It’s a website that profits off of a falsely personal message dedicated to unsuspecting fans. Also, at its crux, it is a website for celebrities with pre-existing wealth to grow that wealth by doing almost nothing. I mean, all they have to do is rely on pre-existing fanbases to pay them large amounts of money, then they just record a short video repeating a message that’s already been typed out for them? Someone, please explain to me where the concrete service that they’re providing us with is. It’s frustrating because it feels like a lazy attempt for celebrities to exploit their fanbases and the parasocial relationship phenomenon.

On the other hand, Cameo provides a much-needed distinction for a celebrity-based platform separate from the social media platforms for “normal people”. It’s not like a Bella Thorne situation, where Cameo celebrities are eating into the profits of other, smaller creators. It still makes me uncomfortable because it’s a website that thrives off of an unhealthy relationship between stars and their followers. The whole thing feels very exploitative, with some celebrities charging upwards of $400 for personalized, short videos. C’mon, does Paula Abdul really need $400 to create a ten-second video for a longtime fan?

In my opinion, probably not. Websites like this seem to further the gap between normal people and celebrities by clearly defining who a celebrity is, as well as indirectly stating that their time and attention are far more valuable than the average person’s. At least with celebrity sponsorships on Instagram, companies use pre-existing fan bases to universally advertise their product. Cameo simply provides an unfair outlet for media stars to capitalize on their fans’ desire for more direct connection, and, inherently, the parasocial relationship phenomenon.