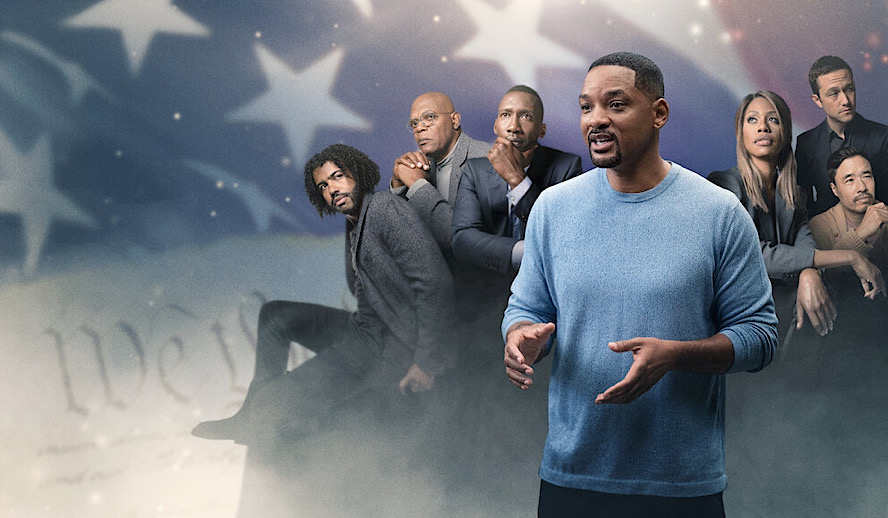 ‘Amend: The Fight for America’ premiered on Netflix on February 17th, 2021. The miniseries presents an unbiased, historical account highlighting the often-overlooked importance of the 14th Amendment. It features incredibly moving performances by Mahershala Ali, Pedro Pascal, Laverne Cox and Yara Shahidi, with Will Smith taking on the role of the show’s host. The series is broken into six episodes, ranging from fifty minutes to an hour in length. Each episode focuses on a specific progressive movement and how the 14th Amendment aided activists in their fight for freedom.

As Accurate as Possible With the Help of Academics, Activists, and Storytellers

The first episode provides an endearing history of the 14th Amendment that does not shy away from correcting history textbooks. One of the main things this episode discusses is the Civil War and Abraham Lincoln’s fight to save the Union. While many Americans believe that the Civil War was a conflict born out of the North’s desire to end slavery, ‘Amend’ tries to alter this belief by presenting Lincoln’s goal as not the abolishment of slavery, but uniting the Union and, thus, America. The show highlights the fact that the abolishment of slavery was used by Lincoln as merely a means to an end, fixing the popular belief that it was always the president’s final goal.

The series carries this revisionist re-telling of the 14th Amendment throughout its entire run time, attempting to create a truly fair and unbiased historical account that credits historical figures for the work they deserve to be recognized for. This aspect makes it not only incredibly interesting to watch, but also extremely educational even for audience members who believe themselves to be experts on American history.

The show’s diverse visuals assist in its goal of providing an accurate historical account and mixes animation and talking-head interviews with highly-charged monologues to exemplify its key points. The animation sequences are beautiful and abnormally artistic for a history program. They visualize the fight for freedom and justice in America by highlighting keywords, such as “resistance” and “control”. These present a key theme, both visually and abstractly, that the show revolves around: the interpretation of language. For example, it presents multiple judgments of the meaning of the Constitution in the first episode.

Some radical Americans, during the time of the Civil War, believed that the Constitution was inherently anti-slavery, using its language to provide evidence to support this belief. Other Americans, however, believed the Constitution was inherently pro-slavery, using the context of its creation as support for these claims. ‘Amend’ does an excellent job of showcasing these tricky, gray areas that exist within the specific wording of laws and court cases, providing the viewers with unbiased information to ultimately make their own judgments concerning the language of legal jurisdiction. Once again, the impressive, highly stylistic animation helps the audience to visualize these words and the multitude of possible meanings that accompany them.

Returning back to the series’ visual style, I’d like to discuss the unique technique that it uses to present first-person accounts of historical events. Many guest actors, such as Bobby Cannavale and Joseph Gordon-Levitt, perform minimalist readings of historical figures’ writings. In the first episode, Mahershala Ali performs as Frederick Douglass, bringing his writings to life with the aural medium. He wears a minimalist black suit and stands on the stage of the show, with historical pictures decorating the walls behind him. He speaks in a first-person narrative, recounting Frederick Douglass’ activism in fighting for the abolishment of slavery. These primary sources not only add to the historical accuracy of the show, but they are also performed in an engaging way that allows the actors and actresses we know and love to embody these famous, historical figures. It’s a technique that I’ve never seen done before in a documentary-style show and it helps to break up the talking-head interviews with professional academics. The monologues are almost like quotations in an essay, providing supporting evidence to the claims of historians featured.

The talking-head interviews, though a traditional method in documentary filmmaking, feel fresh in that they account for multiple voices, not just those of professional historians. The interviews also feature Department of Justice employees, who keep the historical analysis well-rounded and factual. They offer a different perspective from the professors and researchers, a perspective that helps dissect the legal jargon that can be confusing to a common audience. The diverse opinions don’t end with the government employees, however. As the show progresses into a different historical era, that of the twentieth century, it features the perspectives of current activists like Bree Newsome Bass. Bass was arrested in 2015 for scaling the official South Carolina flagpole and removing the Confederate flag.

This came only ten days after the Charleston church shooting, an act of terrorism performed by white supremacist Dylann Roof. This activist performance by Bass was something that I felt wasn’t covered by national media at the time, so it was really interesting to learn about Bass’ intentions with the event. Her first-person perspective was not only informational but also powerful when coupled with the video recordings of the event. It was incredibly moving to see such a passionate display of justice and activism in the wake of a tragedy.

‘Amend’ has a broad range of topics that it discusses, something that surprised me upon my first viewing. I assumed it would focus mainly on racial inequality and the fight for civil justice, but it goes much deeper than that. Marriage equality, women’s rights, and immigration policies are all covered within the span of six episodes. Of course, all of these progressive movements are united under their utilization of the 14th Amendment. Will Smith is absolutely right when he emphasizes how diverse and often-overlooked the power of the 14th Amendment really is in the first episode. It is a crucial, legal tool used to progress our society forward on multiple levels, not just racial inequality.

Among its many successes, ‘Amend’ proves its most important point in this revisionist historical account is to unite Americans. Though we have a long way to go in progressing our laws to reflect the true meaning of the 14th Amendment, equal rights for all US citizens, it’s amazingly encouraging to see how far we’ve come since the amendment’s implementation in 1868. The show’s goal is to accurately re-tell American history, but also to make us feel proud about being American; proud to live in a country with such passionate activists willing to fight the difficult battles necessary to progress society forward. At a time where progressive movements divide our country and political tensions are peaking, ‘Amend’ reminds us that true freedom and justice for all is possible, as long as we continue the fight.