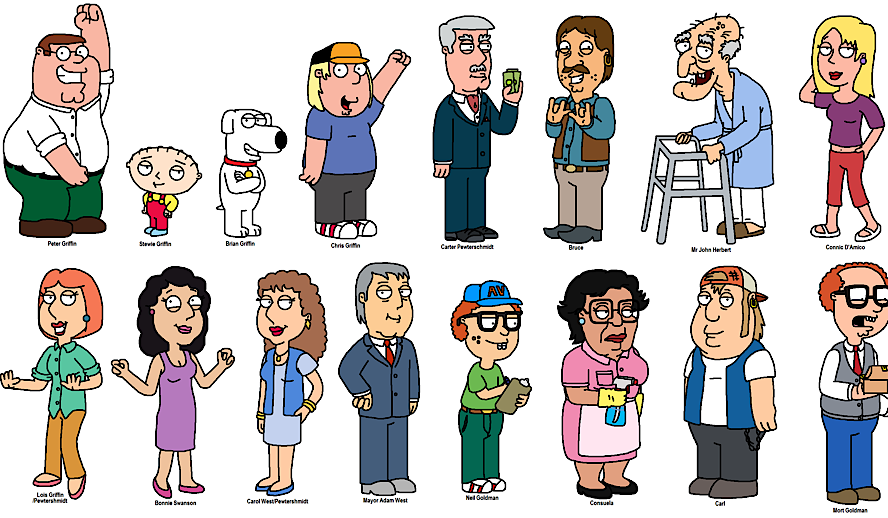 Sure, ‘Family Guy’ is not a show created to help intellectuals go deeper into their quest to ponder the meaning of life, but the butt jokes are pretty damn funny so we’ll forgive it. We’ll leave shows like Lost, Game of Thrones, and Sesame Street to teach us about human morals and the extent man will go to to achieve his goals (or the extent Cookie Monster will go to to achieve his cookies). Let’s sit back, relax, and lose one or two brain cells by watching a marathon of Family Guy.

Family Guy is an old reliable for American television. If you had a tiring day and you want to just relax for 22 minutes and watch a family of people who have made more poor life choices than you, Family Guy’s had your back since before Y2K and it’s still going strong 20 years later.

Meg sucks. She truly sucks. Why does she suck, you ask?… I don’t really know but if she were an animal, she’d be that fly that always manages to find your back porch when you’re trying to have a barbecue or that monkey at the zoo who is outcasted from the other monkeys and can do nothing but scratch its butt in vengeance. In the first few seasons of the show, Meg was just a normal teenage brat, but I suppose the Griffin family had a meeting in which they mutually agreed that all teenagers suck (a sentiment everyone can agree with) and in later seasons, Meg becomes everyone in the Griffin family’s favorite punching bag.

She rarely ever does anything about it but when she does, she comes back with a vengeance. She intentionally causes a car crash with Peter and his friends in the passenger seats and after being sent to prison, she makes everyone in the family her b***h. But usually, she just is fun to pick on and the Griffin family likes to keep it that way.

Apparently, the giant chicken Peter picks fights with on occasion has a name. Who knew? Ernie is what happens when a doctor who is disturbingly the only family doctor in Quahog does experiments on chickens on the side. Little is known about Ernie besides the fact that he friggin’ hates Peter. He always appears on a random street corner, locks eyes with Peter, and a fight of Marvel movie proportions ensues. The fights normally take up about a quarter of the episode’s runtime and have nothing to do with the plot. They’re completely unnecessary yet somehow absolutely necessary at the same time.

Angela no-last-name was played by the incomparable Carrie Fisher and unfortunately, the character died along with the actress. Angela was Peter’s boss with a stick up her butt. She was seemingly the only character who held Peter accountable for his chronic idiocy. But who wouldn’t want to fire someone after they accidentally blow up a children’s hospital using company funds? Angela’s clear favoritism towards Opie, Peter’s co-worker with even fewer screws in place than Peter, is the one thing that motivates Peter to actually try at his job.

As mentioned earlier, Dr. Hartman is the Griffin family doctor who is not qualified to have a job at all, let alone have a profession in which one regularly handles needles. He’s known for “performing” all the stupid doctor jokes such as holding his clipboard upside down and putting his stethoscope in the wrong place. We can’t be 100% sure whether he’s trying to ease patients’ stress or whether he actually thinks one’s heart is in his stomach.

Despite his stupidity, Dr. Hartman does seem to have a heart. He sacrificed his own kidney to save Brian’s life. He cares about his patients, he just doesn’t seem to have the mental capacity to take care of them. Although, arguably someone who cared about his patients and wasn’t competent enough to take care of them would pass them on to some other doctor. And therein lies the Hartman paradox.

The people of Quahog might prefer a Mr. Rogers type over a Mr. Herbert type, but they have to suck it up for our amusement. Mr. Herbert is not so subtly implied to be the town pedophile. He is constantly crushing on and flirting with the underage and oblivious Chris, who is not quite smart enough to pick up on what’s going on. Mr. Herbert’s just a sweet and quiet old man who dabbles in a bit of kid-loving on the side.

Brian is the words “um, actually” personified. He is the biggest know-it-all in the town of Quahog, which is saying a lot about his ego given that he lives with an evil genius baby. Brian is all talk and no substance. His book which he intended to be the next great American novel ended up being the worst-selling novel of all time. Brian’s favorite hobby is spouting philosophical quotes he doesn’t understand and interrupting casual conversations to add in his brilliant insight.

And yet, Brian is a loyal best friend to Peter and the Griffin family. I’d hate to give him an ego boost, but though Brian’s probably the only member of the Griffin family who can survive independently, he chooses to stay by his owners’ side because he genuinely loves them and would do anything for them. The best way to describe Brian’s character is a loving and loyal d****b*g.

Related article: Seth McFarlane: The Busiest Man in Television And A Comedic Genius

Adam West is just as incompetent as Dr. Hartman. The only difference is Dr. Hartman deals with one patient at a time while Mayor West has the lives of the whole town of Quahog in his hands at all times. Adam West is like a little kid who hasn’t figured out life yet. And yes, you could make the argument that many adults haven’t figured out life yet, but most adults don’t spend $150,000 in taxpayer money to find out who’s stealing their water. Granted, I have no idea what it means to steal water, but I’m pretty sure it’s not something anyone wants their tax money going to.

I don’t know what’s up with the trend in animated sitcoms that makes babies the smartest members of their respective household. Take Rallo Tubbs for instance or even Maggie Simpson who seems to always have things figured out better than Homer. But Stewie Griffin is the Einstein of all the animated sitcom babies. He invented time travel for crying out loud! Stewie is the smartest evil genius who still needs his diaper changed on the regular. It’s hilarious how Stewie cracked inter-dimensional travel and yet relies on Peter, the show’s least competent character, for pretty much everything. Do you think a baby’s going to drive himself to daycare?

And finally, we arrive at the man, the myth, the legend, Peter Griffin. I don’t quite know where to start with Peter, the titular family guy of Family Guy. This man has managed to do everything from playing the harmonica with his butt to being friggin’ Han Solo. And this all while having the IQ of a goldfish. And I’m not speaking metaphorically, he’s been tested. He does genuinely love his wife and probably loves his kids, but he’s too busy fighting with giant chickens and going on golf cart joy rides through beer factories to provide for them.

Peter is the type of person who is willing to sacrifice his daughter to the Mayan gods for a Klondike bar. He has the mental capacity of a walrus and the body of one too. Peter does seem to have a heart, but all the clogged arteries make it really hard for it to pump blood to his brain. Still, at the end of the day, he always comes home to his ever-patient but still loving family and continues to be a lovable yet highly incompetent family guy.