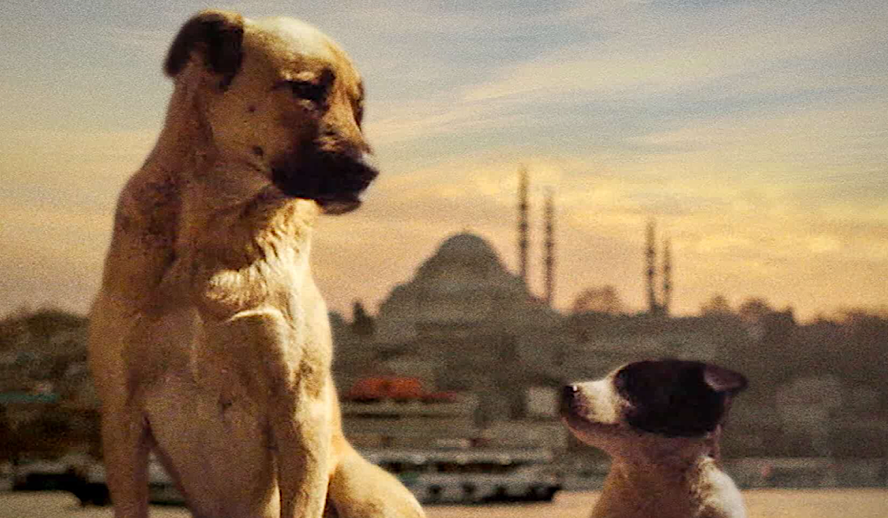 The hour-long documentary ‘Stray’ begins with an interesting fact: Turkey is one of the only countries where it’s a crime to euthanize or hold captive stray dogs. The reform came after Turkish authorities brutally tried to rid of the stray dog population over the last century, prompting eventual protests and demands for change. In the modern-day, the result is a unique society welcoming strays, which is explored in the film through the perspective of a stray dog named Zeytin.

In the film, we follow Zeytin as he goes about his day in Istanbul, Turkey through moments of adventure, quietude, and curiosity. Ultimately, the film functions as a heartening look into those living in the margins of society and existing in its public spaces. It’s humbling and warming, but heart-wrenching at the same time – a great documentary rich with empathy and spirit. And – it’s a subtle call to action. As the multi-talented director, producer, screenwriter, editor, and DP Elizabeth Lo said, “I really want the film to question why we don’t allow dogs to roam freely when they can survive peacefully amongst us. Why is it that we don’t tolerate dogs on our streets?”

Ultimately, the award-winning documentary excels as a sympathetic, touching piece and is a great watch for all dog lovers or anyone simply looking for a fresh, unconventional film to watch.

Related article: 10 Must-Watch Animal Movies – Pets in Film: A Look at What Animals Bring to Film

Related article: 10 Must-Watch Tearjerker Movies for Both Women and Men

‘Stray’ – A Surrender of Traditional Narrative

The film primarily follows a stray dog named Zeytin as he weaves through the streets of Istanbul. It’s quite cyclical, transitioning from day to night and season to season, with each scene revealing just a little bit more about Zeytin’s life and the society he lives in. Of course, ‘Stray’ is not a fictional, narrative film and Zeytin is not an actor but a real, stray dog. Reportedly, the filmmakers had to follow Zeytin over the course of two years using collared GPS trackers they would attach to him nightly, in order to capture their footage.

According to director Lo, this meant a complete surrendering of classic filmmaking techniques. Though she had clear intent and specific themes she wanted to explore, she needed to rely on Zeytin to lead the way. Luckily, Zeytin ended up being quite the regular in the city, frequenting the same haunts and interacting with specific groups of people who love and adore him. Therefore, there was a firm understanding of Zeytin’s place in society, as well as his relationships and personality.

‘Stray’ is also unconventional in that it tries to put you in the point of view of Zeytin himself. The film is largely shot from his height and gait – placing audiences directly in his shoes. This pays off in incredible ways, creating an immersive experience where you almost feel like a stray dog yourself. As Zeytin walks the streets, he hears a myriad of sounds: conversations ebbing in and out, loud car horns, street music, etc. This movement and exploration really set ‘Stray’ apart from traditional documentaries and points of view. Additionally, the film is pretty understated in its exploration of its perspective and themes; it doesn’t try to force any narrative, it just follows Zeytin throughout his days.

What it Means to Live in the Fringes of Society

‘Stray’ presents a story of public spaces within society and who inhabits them. For instance, we see Zeytin interact with a group of homeless Syrian immigrants, who he’s befriended. Zeytin follows them as they are ousted from the construction buildings they are living in, and they return the support when comforting him after a fight with another stray. We also see Zeytin weaving through a protest for women’s rights one night. Ultimately, the film begins to make a connection between stray dogs and these groups of people, who are also vulnerable and not in a position of power. As the film shows, these groups often support each other, finding commonalities in their struggle and adversity. If anything, they provide company for each other as they navigate their survival in the streets.

The film also shows what can happen when those individuals are supported by their society. Because their protection under the law has resulted in a supportive atmosphere, the stray dogs are routinely fed and pet by onlookers and citizens. They may not have a “home,” but in a way, they have been communally adopted by the city. In fact, an interesting parallel the film makes is that the dogs may even have more rights than the Syrian immigrants in the film – who are not allowed to live on the streets like the dogs are. This isn’t the main problem explored in the film, but ‘Stray’ is simply a multifaceted documentary through which these subtle parallels can be drawn.

Lo describes it well, saying that the film highlights “lots of parallels of what it means to thrive in the margins of society,” and that she believes “the view of life is more accurate on the peripheries, away from centers of power.” This is perhaps why the film feels so authentic and honest. A dog cannot act or convince. He can simply walk through its life and show us what he observes.

What Dogs Can Teach Us

Apart from societal, moral lessons, ‘Stray’ also simply reminds us that dogs are lovable, endearing creatures. As any animal owner knows, dogs are imbued with a sense of loyalty and unconditional love not necessarily found in their human counterparts. Zeytin himself is an extremely easy protagonist to love. He’s playful and outgoing. He’s self-assured and confident – unbothered by the humans around him. He has incredibly expressive eyes, highlighted throughout the film, where you feel like you can almost see what he’s feeling – whether that be his perks of curiosity, tiredness, or alertness. He provides companionship to those who need it, whether it be people or other stray dogs also trying to survive.

‘Stray’ also reminds us to be humble and appreciate the life that we have. As Zeytin trots through the city, we hear peoples’ conversations in the backgrounds – from private marital disputes to political debates. From a dog’s point of view, though, they all seem trivial. Zeytin doesn’t need to argue about things – he just needs to concern himself with food and sleep. He leads a very restful existence, which is pretty enviable. Obviously, while humans do have responsibilities they need to tend to, it’s a good reminder to not get wrapped up in all of it and to appreciate the small things in life.

The film begins with an epithet that sums it up well: “Human beings live artificially and hypocritically and would do well to study the dog” – Diogenes of Sinope 360 BC

‘Stray’ is now out in theaters and all streaming platforms.