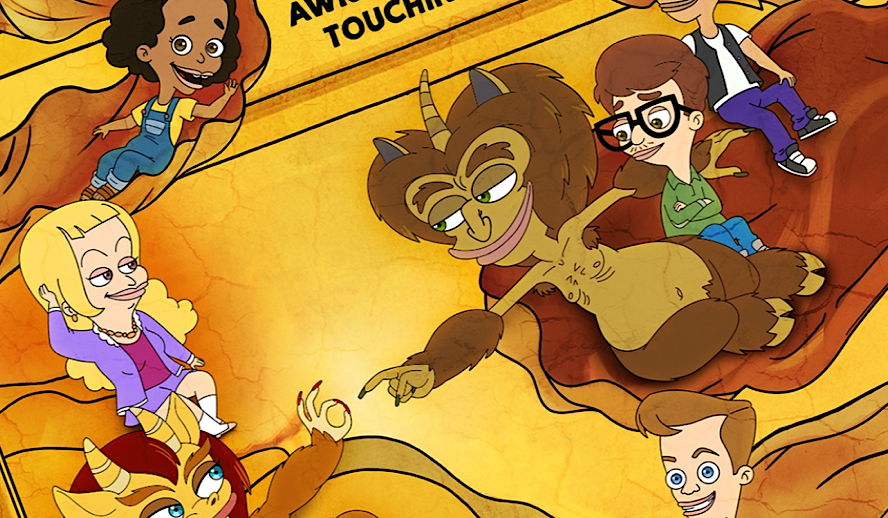 Animated adult TV: Maybe the title of this article is a misnomer because there wasn’t much of a naissance beforehand. Back in the 60s, there was The Flintstones and The Jetsons which are technically considered “adult sitcoms” but this was during the time that saying that Lucille Ball was pregnant was considered too risqué. So, adult TV was those considered anything more raunchy than Mr. Rogers. I’m sure Dora would be considered adult TV back in the day. But, my friends, I am glad to say that times have changed and we’ve gone from a happy family sliding down the tails of dinosaurs to a grandfather drinking something a little stronger than Flintstone’s cereal milk from a flask while cursing out his grandson during interdimensional travel. Welcome to a brave new world of animated raunchiness. I will be your tour guide through unnecessarily violent chicken fights and the washed-out horse celebrities that make up this generation of animated TV that is rated MA but is for the least mature over 18-year-olds on earth.

Related article: The Most Trusted Take/Perspective on Any Hot Button Issue… ‘South Park’?

Animated Adult TV History- The D’oh Heard Around The World

In the 80s, the world of animated TV made for adults was a wasteland. Animation was seen as a medium created for children. Enter the world of yellow people, which is not racist because everyone in Springfield is literally yellow. Shorts revolving around the titular family of The Simpsons began airing on The Tracy Ullman Show in 1987. The shorts were so popular that the series The Simpsons began airing in 1989. The show was animated but it was too impolite to be considered a kids show with Bart constantly screaming “eat my shorts!” and Homer being a not so closeted alcoholic.  The show primarily finds its audience in boys/men aged 12-49. Many fans would say the show significantly dropped in quality after the season 8 episode The Principal and the Pauper in which they are said to have jumped the shark by saying a beloved recurring character was not who we thought he was. But there are still some incredibly funny episodes nowadays and the show is currently celebrating its 30th season so it clearly still finds an audience.

Not Your Grandma’s Animated Sitcoms

While The Simpsons is more geared for an adult audience than shows past, it still wouldn’t be considered “raunchy”. That’s where the raunch-masters step in. South Park came on to the scene in 1997. It’s about four fourth-graders and their various fourth-grade hijinks. Doesn’t sound too R-rated at first glance, huh? The pilot episode is about one of the boys being abducted by aliens and getting an anal probe. Need I say more? South Park is, in essence, trolling what people believed an animated sitcom was with its innocent-seeming premise that could also be the premise of a kids’ show. But, naturally, it flies off the rails, jumps off a cliff, and explodes in a ditch.  Family Guy arrived in 1999 which started Seth MacFarlane’s career as the busiest man in Hollywood. He’s the executive producer of three different shows right now and I assume he’s helping in keeping Red Bull in business. Anyway, Family Guy is The Simpsons’ drunk uncle. While Homer is a day drinking lovable buffoon, Peter Griffin is drunk driving a golf cart through a brewery. Without these pioneering shows, TV would look very different today.

How Weird are these Shows, You Ask?

With South Park’s stoned towel side character and a neurotic wannabe Rhodes scholar dog, another side effect came from the new wave of animated sitcoms starting in the ‘90s. How to put this in a scholarly manner? They got weird as f@$k. Family Guy and South Park empowered creators like Dan Harmon and Justin Roiland to make Rick and Morty, a show about an inter-dimensionally traveling grandpa/grandson duo hell-bent on wreaking havoc around the universe… Or saving the multiverse. It’s never entirely clear. And then, of course, Rafael Bob Waksberg came in and created Bojack Horseman  which is about a horse who is a former sitcom star. And then Nick Kroll came along with Big Mouth, a show about preteens going through the lovely journey of puberty guided by their hormone monsters. Each of these shows is its own individual acid trip but clearly, audiences love them as these are some of the most popular shows right now.

Why We Need Cartoons for Grown-Ups

The Simpsons opened up a new door in the animation industry. While, in the past, animators were restricted to only creating content that was kid-friendly, now the possibilities are endless. Also, the world is live-action! It gets a little boring to only see live-action shows made for adults on TV. This explosion of adult animated programming allows shows to be more inventive and more creative than they ever were. With settings and characters that were in the past prohibitively expensive and impractical to explore on TV, these shows can now go further and be wilder than any shows past.