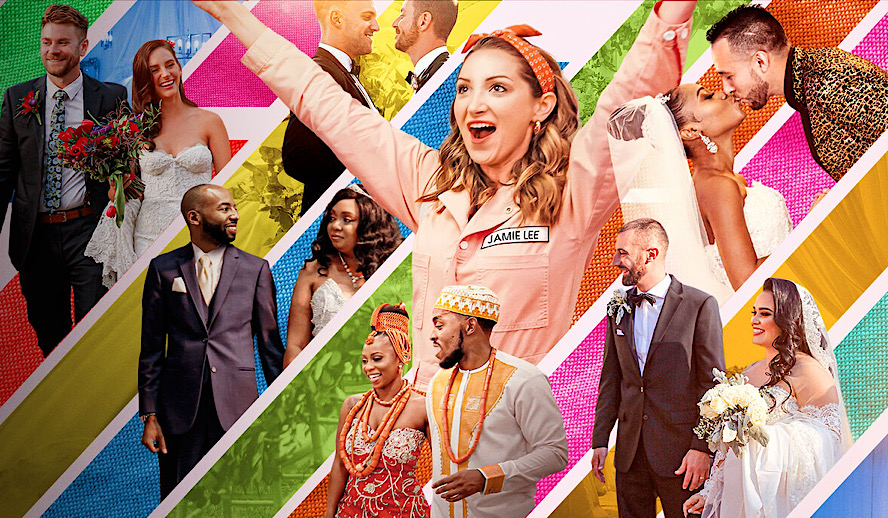 I’ll start off by admitting that I love weddings and I love shows about weddings. I grew up watching reruns of ‘Say Yes to the Dress’ ‘Whose Wedding is it Anyway?” and ‘Four Weddings’, so when I heard about this new Netflix reality show, I already knew I was going to love it. Jamie Lee (‘Crashing’, ‘Girl Code’) serves as host and executive producer of the show along with one of her famous comedian/actor friends she invites to co-host each episode and help her along the way. For fans of love and chaos, couples planning out their big day, and watching the family drama unfold with some tears along the way, this might possibly be your next binge-watch.

When romance fizzles the wedding coach can help

The worst part about weddings is pretty much every single roadblock leading up to the big day. The planning, the decisions, the phone calls, the arguments, the second-guessing, the flower arrangements! I could seriously go on and on. If only there was someone to walk a married couple-to-be through all these steps along the way. Cue: Jamie Lee, former bride, and wedding extraordinaire. Lee walks six couples through their toughest days leading up to their wedding and gives advice on how to tackle the obstacles that present themselves.

With six half-hour episodes now streaming, each one introduces a new couple and their unique marriage story. Somehow even with only six couples in question, this series tackles just about every single question or qualm imaginable— literally. Just to name a few, Lee is faced with some tricky and sticky situations such as throwing the perfect bilingual wedding, hiding a pregnancy from a soon to be bride’s mother, a grand canoe (yes canoe) entrance, lack of sex drive between soon-to-be husband and wife and dealing with a lonely bride who attempts to plan her entire wedding across the country from her friends and family. These absurdly candid and enticing six episodes are a must-watch, obviously.

All the things right with this series

One of my biggest complaints with a lot of wedding shows is they are often filmed in a distasteful way that highlights the bride, groom, and their family in such a negative light. I feel as though most shows about marriage always try to paint the perfect “bridezilla” story and want to portray these frazzled families as crazy and over the top— just for the views. I can wholeheartedly report that this is not the case with ‘The Wedding Coach’. In my opinion, this show really depicted each person positively no matter what familial or personal battles they were overcoming.

I also really enjoyed that each episode followed one journey at a time. I liked this formula in comparison to other wedding shows which follow three to four families/couples at a time and jump back and forth between their stories over the span of an hour. These episodes move quickly, however, and there’s a 90% chance you will most likely find yourself watching all six at once as I did. You’ll laugh, cringe, and maybe even shed a few happy tears as we watch these six couples’ journey to happily-ever-after.

For those that don’t know the name Jamie Lee, she is an actress, writer, comedian and author of Weddiculous: An Unfiltered Guide to Being a Bride, a bride-to-be’s handbook on how to get through the difficulties of planning and executing a dream wedding. Lee is no stranger to TV as she has acted in several television shows while performing stand up on some of TV’s most famous late-night programs such as ‘The Late Late Show with James Corden’, ‘Conan’, Chelsea Handler’s ‘Chelsea Lately’, and ‘Last Call with Carson Daly’.

In her newest venture ‘The Wedding Coach’, Lee provides any and all knowledge she acquired on the process while proving that achieving the perfect wedding isn’t always impossible. Not only do we have the pleasure of the hilarious Jamie Lee as host, but each episode she graciously invites one of her comedian/actor friends to be her “plus one” to the wedding which is practically a show in itself. Mamrie Hart, Jon Gabrus, Matteo Lane, Alesha Renee, Punkie Johnson, and Fortune Feimster are all guest stars on this hilariously insightful new series.

In 2016, Lee married fellow comedian Dan Black and during the process of her own wedding, she learned a considerable amount of do’s and don’ts. She speaks from truth as she coaches couples every step along the way from dress shopping to saying “I do”, since she knows this journey well. In 2017 while promoting her book she admitted why she felt like writing about her experiences were important.

Planning her own wedding is what lent inspiration to writing Weddiculous. In an interview with SplitSider she explained, “No one was talking about how during your engagement period it’s actually a really difficult time. I want to be clear that I’ve had a lot of friends who have just sailed through it, planned the wedding, and it was a dream. But for me, I had lots of turmoil with my then fiancé/now husband. I really wanted to make a book that was honest, funny, and also practical…I want to make sure that people don’t feel alone. That’s my main mission: that if something is to happen to them they realize that it also happened to someone else.”

While ‘The Wedding Coach’ has only been out less than a day, I have already completed the entire first season and patiently await the announcement of season 2. In a world where there is currently a lack of traditional weddings due to COVID restrictions, this series truly filled the void in my heart. My advice: go stream ‘The Wedding Coach’ now on Netflix… you won’t’ regret it.