‘The Last Matinee’ is A Gory Throwback that Celebrates Horror Cinema 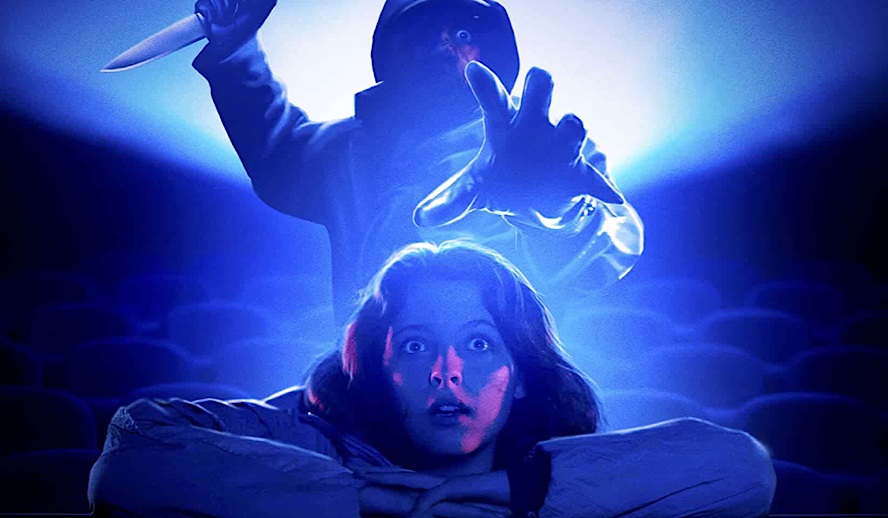 Director Max Contenti sets the horror genre back a couple of decades with his Uruguayan slasher movie, ‘The Last Matinee’, and the genre is all the better for it. Although it takes place in the year 1993, ‘Matinee’ has remnants of the 70s and 80s horror tropes woven into its fabric, making it easier for Contenti’s work to appeal to a wide variety of generations. The killer is a terrifying shout-out to the kind of inhuman slashers that used to represent and symbolize these particular brands of scares.

The villain, appropriately named the Eyeball Killer, is much more human than other predators with his MO, but somehow that just adds to the Eyeball Killer’s petrifying aura. He carries with him the haunting reminder that everyone is capable of great, unrelenting evil, and some, like the Eyeball Killer, even feel like they were born with a gift to mass murder. With a unique atmosphere, a horrifying villain, and fantastic performances by everyone involved, Contenti’s love letter to the horror movies of yesterday hits all the right notes, except ‘The Last Matinee’ puts fear into your heart instead of love.

‘The Last Matinee’ Takes Its Time And Savors Its Victims

Much like the killer it follows, ‘The Last Matinee’ takes its time with its audience. It makes sure we’re familiar with its cast of characters, at least on a basic level, before it provides the thrills its audience has been dying to experience. A part of this ill-fated cast of characters is Ana, played by Luciana Grasso, an aspiring Engineering student who fills in as a projectionist for her ailing father, working in a movie theater that seems to be in worse condition than her dad. The film also follows a couple who can barely keep their hands off of each other, three loud and rambunctious teenagers, young Tomas played by Franco Duran, and Daiana Carigi’s Maite.

Among this unsuspecting group of potential cinephiles is Asesino Comeojos, the Eyeball killer brought to you by Ricardo Islas, who carefully stalks his collective prey from the edges of a dark theater, where the movie screen’s light can never reach him. But while Comeojos looms precariously over our audience, his threat is juxtaposed against the calm, harmonious atmosphere of the movie theater our victims indulge in before Comeojos begins his long-awaited hunt. ‘The Last Matinee’s’ romanticization of the theater experience almost comes off as intentional. Covid-19 has flipped Hollywood upside down and inside out, threatening the livelihood of theatrical releases in the wake of an unprecedented pandemic and continues to jeopardize the future of traditional Cinema in the wake of declining box office numbers.

In that sense, ‘The Last Matinee’s’ first twenty minutes or so feels like an appeal to preserve the theatrical experience of Cinema at all costs. It demonstrates the potential life-changing relationships that can forge through a common Cinematic bond, the thrill that once came with seeing the kind of film in theaters your parents specifically forbid you to see, the unique interactions only a theatrical environment can cultivate, tethering strangers together through their unconditional love for Cinema. Thanks to the setup’s subtle nuances, ‘The Last Matinee’s’ pace is patient without feeling glacial. It’s very much a slow dance with these characters, allowing you to bask in the mood and admire the details of these characters before the movie reveals its sinister self.

Because of its set-up, when the movie ramps up and switches into high gear, it’s a switch that feels organic and well-earned. Comeojos is a force to be reckoned with, and in the true fashion of a slasher villain, doesn’t hint at even the slightest mercy towards his victims. He’s indiscriminate in his approach, an equal opportunity murderer, offering the same level of threat and violence towards his victims regardless of age or gender. Comeojos’ tactics also left me particularly squeamish as far as his methods go. For decades, Cinema’s favorite horror slashers have demonstrated an artistic level of creativity when torturing or murdering their victims. From Jason Voorhees to Michael Myers, from Candyman to Leatherface, they have decades’ worth of content in which they can practice their creativity on their helpless victims.

But perhaps what makes Comeojos’ methods so distinct in their brutality is the very real setting of the movie theater. ‘The Last Matinee’ does such a fine job of giving the theater such a wholesome, sacred feeling, that watching Comeojos indulge in his horrific fantasies is like watching him carry out those same acts inside of a church. Contenti’s quality camera work also has a habit of bringing out the best, or the worst rather, in his visuals. He lingers on the blood long enough until it feels like it’s spilled on you, he zooms in on wounds with a surgeon’s attention to detail, determined to make you squirm. Contenti’s camera work when it comes to filmmaking is the MVP of this ‘Matinee’, taking as much glee showing the audience his gruesome work as the killer does. The result makes for an uncomfortable and captivating watch that helps you really appreciate the gore presented.

Nice Performances With A Few Standouts

The character who we follow the most, Grasso’s Ana, is very convincing in the role. Hers is the one given the most depth, and Grasso does her best to bring that depth to the surface so everyone can see it. She’s also Comeojos’ most formidable victim, and I couldn’t help but wonder if the little tidbit about Ana being an engineer actually gave a reason as to why Ana was such an elusive capture for the killer. Engineering requires great critical thinking skills and an aptitude for rational thinking, so it seems reasonable that, given her background, Ana would be able to maintain her wits while being pursued by a malicious psychopath. If that was an intentional narrative choice by Contenti, then it was a nice touch. In most slasher flicks, victims manage to elude the killer for a certain period of time due to pure luck, but here, it could be Ana’s background in engineering that awards her the tenacity needed to engage her predator.

Grasso’s performance is also impressive. She not only sells the terror exemplified by some of horror’s greatest scream queens, but she also shows off more layers when it’s required, proving to be more than just your typical female victim we’ve come to know in slashers. Islas as Comeojos also puts on a convincingly traumatizing performance. Only rocking a raincoat, he doesn’t have quite the same level of iconic aesthetic flair that a Michael Myers has, but his acting makes up for his minimalist fashion choice. Islas has also dabbled in horror before, having directed 2011’s ‘Frankenstein: Day of the Beast’,’ so it makes sense that he’d also be able to bring some of his own horror sensibilities to ‘The Last Matinee’.

Julieta Spinelli was a nice surprise as Angela, one of the loud teens who almost ruins the movie for the audience before the killer does. When ‘The Last Matinee’ reaches for higher thrills, Spinelli definitely rises to the occasion and is strong enough to help Grasso carry the movie.

‘The Last Matinee is definitely a recommended watch, especially if you’re feeling nostalgic and you miss the days of old-school horror. The film is worth exploring for its cinematography alone, as it’s rare for a horror setting to come off as majestic and wholesome as Contenti makes the theater out to be. ‘Matinee’ doesn’t make it through its journey without any faults, however. The film is unbelievably predictable, but even its predictability has the excuse of being intentional, as it just further adds to the nostalgia it’s trying to serve you, giving you the kind of experience you’d usually get in the 70s and 80s when all slasher flicks followed the same blueprint. All in all, ‘The Last Matinee’ is a good time, deserving of at least a first watch.