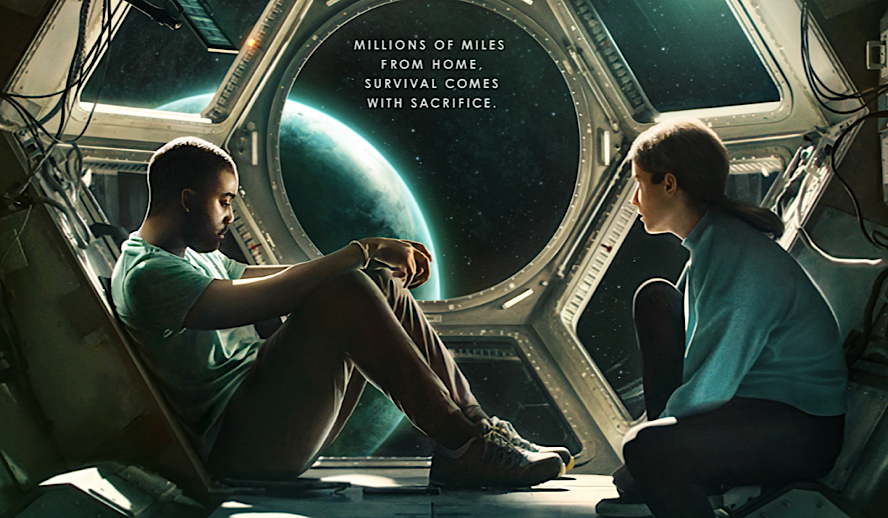 Taking place almost entirely within the claustrophobic confines of the fictional “Kingfisher” spacecraft, much of ‘Stowaway’ plays out like a one-location drama as the crew of a three-person mission to Mars discovers an uninvited fourth. There’s a number of directions that the premise could go in, and ‘Stowaway’ teases at them all–what it ultimately settles on, however, is exploring the interpersonal turmoil that arises within the crew when confronted with the grim cost of their greater survival.

One might get the sense that its subdued plot is a consequence of its relatively low budget, but director Joe Penna (formerly known as the Youtuber “MysteryGuitarMan”) does good work here–following up on his directorial debut in ‘Arctic’, carried by the silent gravity of Mads Mikkelsen and shot on a paltry budget of $2 million, Penna again manages to deliver a polished film with moments of visual poetry.

As for our titular stowaway, we learn that he’s a launch support engineer named Michael Adams, played by Shamier Anderson (‘Wynonna Earp’). Found unconscious in the same compartment as the carbon dioxide scrubber, the burning question is obviously how an entire human being managed to go unnoticed until the spaceship had travelled well past the point of no return.

The movie makes little effort to explain–speaking in breathless, incomplete sentences, the concussed Michael only manages to say, “I thought I was buckled in…” Marina, conversing with Hyperion ground control as she does throughout the film, questions whether the stowaway could have sinister, ulterior motives–Penna swiftly dispels these plot potentialities, however, by staging a series of casual, intimate moments to lay out the characters’ exposition and establish their interpersonal bonds.

Like the first act of ‘Alien’, it’s clearly setting up the emotional dominoes that threaten to topple once the claustrophobic threat appears–Zoe in particular develops a rapport with Michael that makes the ultimate necessity to jettison a member of the crew all the more difficult. In this way, ‘Stowaway’ focuses on the real human consequence behind the practical necessities of survival, and it’s interesting to see Penna utilize the conventions of the astronaut subgenre for the purpose of drama.

The film is bolstered by a confident visual direction under Penna and Director of Photography Klemens Becker, who together produce some beautiful space imagery–if not particularly original. The opening sequence stands out as a naturalistic take on a familiar scene, hanging on the faces of our three astronauts as the shuttle goes from lift-off to docking, accompanied only by metallic rumbling and typical mission-to-ground-control chatter. It’s a solid introduction to a film whose perspective revolves around the four humans at the core of the mission, and its no-frills approach reflects the tone that ‘Stowaway’ will strike for most of the film.

The momentum behind the opening sequence and the discovery of the stowaway, however, is lost when it comes time for our astronauts to take off their suits and actually talk to one another— Stowaway’s scenes of relationship-building are a bit awkward and on the nose, while much of the film’s tension relies on exposition and jargon.

When Marina first becomes aware of the ship’s failing filtration system, for instance, David’s ongoing algae experiment becomes the thin green line between a successful landing on Mars and asphyxiation–whether or not it succeeds, however, is little more than a coin toss that lands at the writers’ convenience. It begs comparison to the gasping desperation of the astronauts who encountered a similar problem in ‘Apollo 13’, and ‘Stowaway’ hardly holds up dramatically in contrast.

The film picks up pace when the astronauts decide to attempt a dangerous, impromptu mission that could potentially save all of their lives. It sounds like a more conventional plot turn that threatens to take an ambiguous moral dilemma and give it a satisfying, action-packed solution–but to the credit of ‘Stowaway’, it actually stays faithful to its core premise. Its ending teeters on the maudlin, with an unexpected character turn that doesn’t feel entirely deserved, but it wins me over with honesty and thoughtfulness that celebrates the individual sacrifice behind survival and progress.

It’s not an entirely successful film, but ‘Stowaway’ firmly showcases director Penna’s strong cinematic sensibilities and efficient low-budget abilities, if not entirely to the same degree as ‘Arctic’. Its borderline didactic script, on the other hand, limits the seasoned cast’s ability to fully showcase their own talents, which also falls on Penna’s shoulders–the camera often seems to have a better sense of direction than the actors.

‘Stowaway’ is available to stream now on Netflix–CLICK HERE to watch.

Shamier Anderson is set to appear in Netflix’s upcoming sci-fi thriller ‘Awake’, set to premiere in 2021.

Toni Collette is set to star as Laura Oliver in Netflix’s upcoming thriller drama ‘Pieces of Her’, based on the 2018 novel of the same name by Karin Slaughter. It follows Andrea, played by Bella Heathcote, who’s caught in a deadly mass shooting at a local diner, only to witness her mother Laura violently eliminate the threat with ease. ‘Pieces of Her’ is set to premiere in 2021.