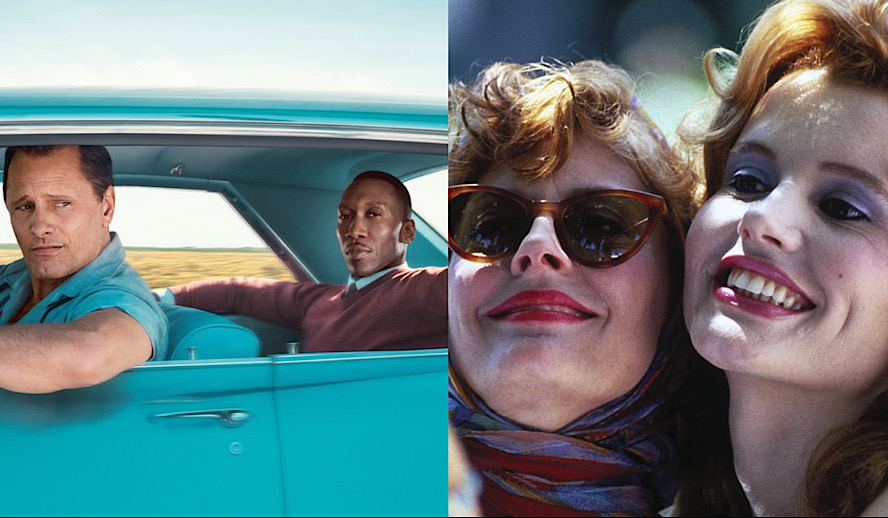 The open road calling to travelers is a time-honored theme. Humans have been journeying across the world as long as they’ve been walking on it. The term “road trip” is a more modern conception in terms of its meaning. The characters are leaving something behind, or they are heading off to find something. For this article, we pick out tales of journeys on the road.

‘Green Book’ follows the story of an Italian-American bouncer as he becomes the driver of an African-American pianist in the 1960s American South. The film is inspired by the true story of Frank Vallelonga and Don Shirley. It made $321 million of a $23 million dollar budget. ‘Green Book’ won Best Picture, Best Performance by an Actor in a Supporting Role for Mahershala Ali, and Best Original Screenplay at the 2019 Oscars.

Directed by Alfonso Cuarón, ‘Y Tu Mamá También’ follows two teenage boys who embark on a road trip with a woman in her late twenties. The coming of age tale pits the trio against the backdrop of Mexico in 1999, rife with political and economic strife. Roger Ebert gave the movie four stars out of four and praised its quality of carefree fun with a deeper layer of seriousness.

This road trip film sports an all-star cast, including Greg Kinnear, Steve Carell, Toni Collette, Paul Dano, Alan Arkin, and Abigail Breslin. Abigail Breslin plays Olive, an aspiring beauty queen, and the film follows her quest to realize this dream. Her complex but loving family helps her on a last-minute road trip when she makes it to the next round in a beauty pageant. The depth and humor of the film make it a memorable movie about family and support.

Gena Davis and Susan Sarandon play two best friends who decide to hit the road to take a break from their day-to-day lives. They plan a short vacation, but their plans alter when Sarandon’s character saves her friend from getting raped at a roadhouse bar. Sarandon kills the rapist, and she and Gena Davis flee the scene. Their journey continues as they attempt to escape from the pursuing police and come to terms with what next for the two of them.

Cameron Crowe’s semi-autobiographical film about a teenage journalist writing for ‘Rolling Stone’, traveling with the fictional band Stillwater, and trying to get his first cover story published, is packed full of adventure. Crowe won an Oscar for Best Writing – Screenplay Directly Written for the Screen. It was also nominated for Best Film Editing and twice in the category of Best Actress in a Supporting Role for the performances of Kate Hudson and Frances McDormand.

Before cars, buses, and planes, there were boats and horses. This film follows a journey of the latter. Christian Bale plays an Army Captain who begrudgingly agrees to escort a Cheyenne chief and his family through dangerous territory to reservation lands. The Scott Cooper directed and written film is a harrowing tale of life in the late 1800s. It showcases the struggles of the times with strong characters and a powerful story.

‘The Wizard of Oz’

If you don’t have a vehicle, you can always walk. “Follow the Yellow Brick Road” is a staple in the history of film. Dorthy Gale gets swept away from her farm in Kansas and finds herself in the magical land of Oz. She embarks on a quest and joins up with new friends from the road while she escapes from the Wicked Witch of the West and tries to see if the Wizard of Oz can help her return home.

‘Mad Max: Fury Road’ came out thirty years after the final film in the original ‘Mad Max’ trilogy. In George Miller’s newest version, Tom Hardy replaced Mel Gibson as the titular character, while Charlize Theron stole the show with her performance as Furiosa. The two team up to escape the clutches of a tyrannical ruler in a post-apocalyptic wasteland. This atypical road trip flick was nominated for ten Oscars and won four.

‘Easy Rider’ is one of the classics of the road trip genre. Dennis Hopper starred, directed, and wrote this Oscar-nominated homage to the hippie culture of the late 1960s. In the film, two bikers head from Los Angeles to New Orleans and run into a man exemplifying a counterculture gap that they had been unaware of. The film showcases the changing of the times through brilliant writing and acting. It is a landmark in Cinema.

The road trip film is a classic genre in movie history. It evokes a calling that permeates all cultures. Joseph Campbell’s work on mythology showcases the importance of Hero’s Journey across the history of different peoples. This journey can be found in the films above. Each movie has its own journey, but they all have the common theme of setting out on the road.

This list touches the surface of the genre’s depth, but it is a good place to start and will give movie-lovers a diverse taste of what the genre has to offer. It is a genre well worth checking out. Hopefully, you enjoy the movies listed above.