‘Samurai Rabbit: The Usagi Chronicles’: The Netflix Action Cartoon Has its Ups and Downs 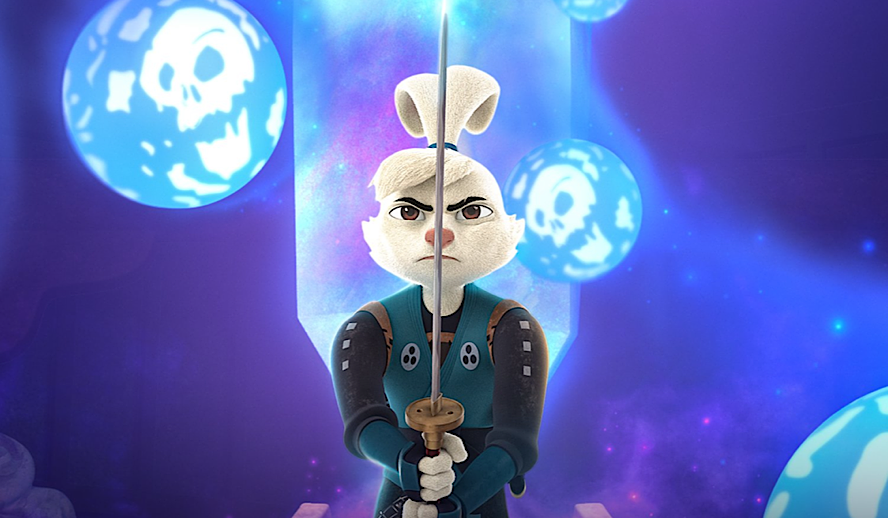 Before I tackle this show itself, I feel it necessary to give some background on it: The show is based on the comic book series ‘Usagi Yojimbo’ written and illustrated by American-Japanese artist Stan Sakai. Set in a world of anthropomorphic animals in Japan’s Edo period, the comic stars a rabbit samurai named Miyamoto Usagi. The comic’s gone on to receive quite a lot of acclaim over the years since its inception, and curiously enough, the character of Miyamoto Usagi has appeared numerous times in the ‘Teenage Mutant Ninja Turtles’ franchise. Considering the comic’s great success, it was only natural that it would eventually receive a television adaptation. Following an announcement that Gaumont Animation optioned ‘Usagi Yojimbo’ as a TV series, it was revealed that Netflix would release the show onto their platform as an original series, under the title ‘Samurai Rabbit: The Usagi Chronicles’.

Now available to stream, ‘Samurai Rabbit: The Usagi Chronicles’ is developed by Doug and Candie Kelty Langdale, with additional development by Ben Jones. Stan Sakai himself is also involved as an executive producer. The show’s voice talents include Darren Barnet, Shelby Rabara, SungWon Cho (best known on YouTube as ProZD), and Eric Bauza. Rather than being directly based on the comic, ‘The Usagi Chronicles’ serves as a sequel; set in a semi-futuristic world, Miyamoto’s great descendant Yuichi Usagi travels to the city of Neo Edo in hopes of following in his ancestor’s footsteps as a great samurai. However, his presence somehow causes an ancient malevolent Yokai spirit to free itself from its prisoned state, and it’s up to him and a group of unlikely companions to put a stop to its plans.

Despite not knowing much about the source material, I was relatively excited for this series, as it looked pretty fun and imaginative. However, having now seen the entire first season, my feelings on ‘Samurai Rabbit: The Usagi Chronicles’ are fairly mixed. There’s a fair bit the show does pretty well; the overall story is pretty engaging, and the characters are interesting. But at the same time, I couldn’t help but feel like the series didn’t quite live up to my expectations. I think this had to do with the show feeling like it was geared more exclusively towards kids than something that could appeal to both young and old audiences. Don’t get me wrong, there’s nothing wrong with a show appealing specifically to one audience, especially when it comes to cartoons; I may love animated works, but I can still accept when something isn’t directly made for someone of my age. However, the source material is fairly old and (from what I know) is aimed at an older audience, and I feel this show would have benefited from a tone that could make it more accessible to fans of the original comic.

One thing ‘The Usagi Chronicles’ does particularly well is aesthetic. Like the original comic, the show is set in a fictionalized version of Japan, which is heavily reflected in both the look and direction. Things such as locations and clothing have a distinctly Japanese look, even down to the rural countryside that Yuichi starts out in, and I appreciate the clear thought and effort that went into the art direction. The show’s score, composed by Aiko Fukushima, also contributes greatly to the feel of the show, utilizing traditional Japanese instruments such as the shamisen, the shakuhachi, and the koto. All of these factors made the overall atmosphere of this show very welcoming; a majority of the show takes place in Neo Edo, and it’s a very neat place to explore alongside the characters. Speaking of…

As I mentioned earlier, I found myself really liking the way the characters were written in this show. There’s nothing new or groundbreaking as far as characterization or traits go, but Yuichi and his new friends are generally pretty fun protagonists. I like the way their relationship progresses over the course of the show, and how their personalities bounce off each other. Some of the side characters are pretty entertaining as well, such as a gang of moles capable of creating powerful shockwaves by snapping. Yeah, that may sound odd out of context, but in the world of this show, certain little things like that just work.

One of my main issues with ‘Samurai Rabbit: The Usagi Chronicles’ actually has less to do with the story and more with the comedy. As expected from a children’s cartoon set in a world of talking animals, this show isn’t 100% serious. On the contrary, it’s got quite a bit of comedic relief throughout…but the problem is, most of it just isn’t funny. Once again, I get that this show’s primary audience is much younger than I am, but most of the humorous quips on display just sound like they have no real energy or passion behind them.

Being an action show, ‘The Usagi Chronicles’ features quite a lot of fight scenes. However, this is where another issue I had comes into play. A lot of the action in the show is paced awfully slow, which is especially apparent in the first few episodes. The movements of the characters don’t seem to have a whole lot of weight to them, and as a result, a lot of the swings and impacts feel unsatisfying. I’m not looking for ‘Street Fighter II: The Animated Movie’ levels of animated fight choreography, but it does feel a bit hard to get invested in the action when it moves so slowly.

‘Samurai Rabbit: The Usagi Chronicles’ is a show that’s definitely meant for kids, but as a show for kids, it does what it sets out to do perfectly fine. The story’s easy to follow, the characters are likable, and the overall tone is fun and welcoming. Sure, I may not have been able to connect with it as much as I had anticipated, but there’s nothing about this show that would make me want to actively discourage people from checking it out for themselves. If you’re looking for a safe action cartoon for your kids to watch, ‘The Usagi Chronicles’ isn’t a bad choice, even if there are plenty of other kid’s action shows I’d recommend over it. The way I see it, this show could be used to introduce younger audiences to the comics they’re based on. Heck, this show is the whole reason I even know about ‘Usagi Yojimbo’ in the first place, and it looks like a potentially interesting series I may have to check out at some point, so clearly ‘The Usagi Chronicles’ did something right in that regard.

‘Samurai Rabbit: The Usagi Chronicles’ is now streaming on Netflix.