‘The Dragon Prince’ is Cartoon Royalty, Great for Fans of ‘Avatar: The Last Airbender’ 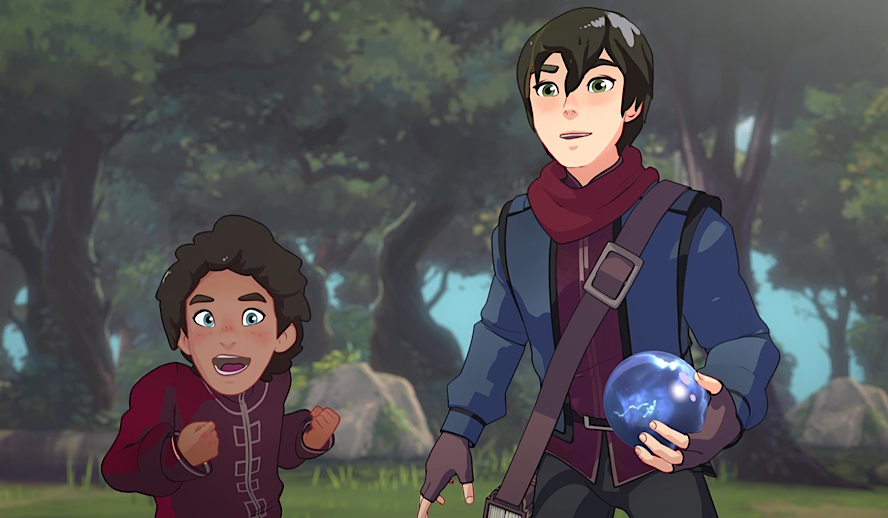 ‘The Dragon Prince’, produced by Wonderstorm and distributed by Netflix, is an action/adventure fantasy series for all ages. The show first hit Netflix in September 2018, with the third season recently released in November of 2019. The Dragon Prince is now expected to continue into the fourth season and, according to an interview by CBR with series co-creators Aaron Ehasz and Justin Richmond is planned to extend beyond that to form a seven-season saga.

Aaron Ehasz and Justin Richmond, the creative minds behind The Dragon Prince, both have experience with crafting fantastic worlds and epic adventures. Aaron Ehasz is best known as the head writer of the critically acclaimed Nickelodeon animated series Avatar: The Last Airbender and this connection is extremely clear to anyone who has watched both shows.

Justin Richmond, meanwhile, is known primarily as the director of the video game Uncharted 3: Drake’s Deception, the third in a series of games which can be best described as “Indiana Jones in the Modern Day”. This project also displays a clear experience with the kind of adventure, action, and in-depth character writing that makes The Dragon Prince so successful.

Related article: Everything We Know About the Upcoming Live-Action ‘Avatar: The Last Airbender’

Ehasz and Richmond make a dynamic duo, and according to an interview with The Beat they work very closely on world-building and creative processes. The two succeed in delivering a show that appeals to a wide audience, pulls no punches and continues to improve each season.

The basic plot structure of The Dragon Prince owes a lot to its spiritual predecessor, Avatar: The Last Airbender. Both series involve a group of children or teenagers journeying across a magical fantasy setting in order to stop war from spreading across the world. The main character, Callum, is also voiced by Avatar alumnus Jack De Sena, who voiced the character of Sokka on that show. The series is set in a fantasy world which was long ago split into two halves: the magical land of Xadia to the east and the human kingdoms to the west, and the two halves are on the brink of war. When the two princes of the human land of Katolis, Callum and Ezran, discover something that could prevent all-out war between the two lands, they are forced to work with a young Elf assassin named Rayla to bring peace to the world. Their journey brings them across the world, and they encounter many external and internal conflicts along the way.

The fairly straightforward plot of the show, an on-foot road trip to a far-away land, allows the show to focus most of its time and energy on world-building and character development. The three main characters begin the series as oft-seen fantasy clichés: the young inexperienced prince, the meek mage, the contemplative assassin. However, the protagonists are quickly given a level of depth that elevates the narrative beyond a typical fantasy adventure. Ezran, portrayed by voice actress Sasha Rojen, begins the series as a carefree child but goes through a large amount of development when he is confronted by the duty to rule a kingdom. Rayla, the elf assassin voiced by Paula Burrows, is often conflicted by her decision to aid the humans who were long considered an enemy to her people. This character drama is handled exceedingly well, giving the trio intersecting character arcs and growth without ever coming across as oversimplified for younger viewers.

A Hero Is Only as Good as His Villain

The series’ antagonists, however, is where the writing for The Dragon Prince shines the brightest. While most for-all-ages cartoons have incredibly one-dimensional villains, this show gives its antagonists as much attention and depth as its protagonists. Lord Viren, a mage and chief advisor to Ezran’s father Harrow, is a dutiful friend and servant to the good king. While one would expect him to eventually reveal himself as an evil mastermind, this trope is foregone in favor of a lengthy series of political movements intended to save his people from war. The descent into villainy is expertly paced and adds weight to every one of the character’s actions. It is patient and nuanced writing for a show of this type, and voice actor Jason Simpson provides the character a great deal of humanity. Viren’s children, Claudia and Soren, are likewise antagonistic but never outright villainous, with the writers favoring a more realistic approach to their characterization. This has the dual purpose of creating suspense, as the audience can never be sure what decisions these characters will make and which side of the conflict they will end up on.

What Doesn’t Kill You Makes You Stronger

There have been three seasons, or “Books”, of The Dragon Prince released so far, and the series has only improved with each new release. Book One, subtitled “Moon”, was well-received for its interesting world-building, detailed character design and skillful character development. However, some aspects of the show were met with less enthusiasm, such as the “choppy” animation which is a result of the use of computer-generated imagery rather than hand-drawn visuals to bring the show to life. However, the show’s creators addressed this concern in an interview with The Verge, and the animation has seen noticeable improvement with each new season. While characters would stutter when moving in the first season, by Book Three movement appears realistic and smooth. Future seasons would hopefully maintain this improvement, or even continue to evolve the animation style.

Another potential detriment to the show’s success is its short seasons, as each consists of only nine episodes. This means that each season must move very quickly in order to tell a complete story, while also developing the overall narrative of the show. Some viewers, such as Garrett Neal of The DePaulia, felt that this was detrimental to the series’ pacing. Fortunately, The Dragon Prince does find room to breathe in later seasons, with quiet moments and heartfelt conversations ever-present amongst the excitement of the characters’ journey.

A Perfect Storm of Wonderment

Overall, Wonderstorm’s The Dragon Prince is an exceptionally well-done fantasy show that can be enjoyed by all ages. Breathtaking animation, which continues to improve with each new season, brings to life memorable characters and a truly unique fictional world. With three seasons released and several more planned for the future, the empty space left by Avatar: The Last Airbender has been well and truly filled.