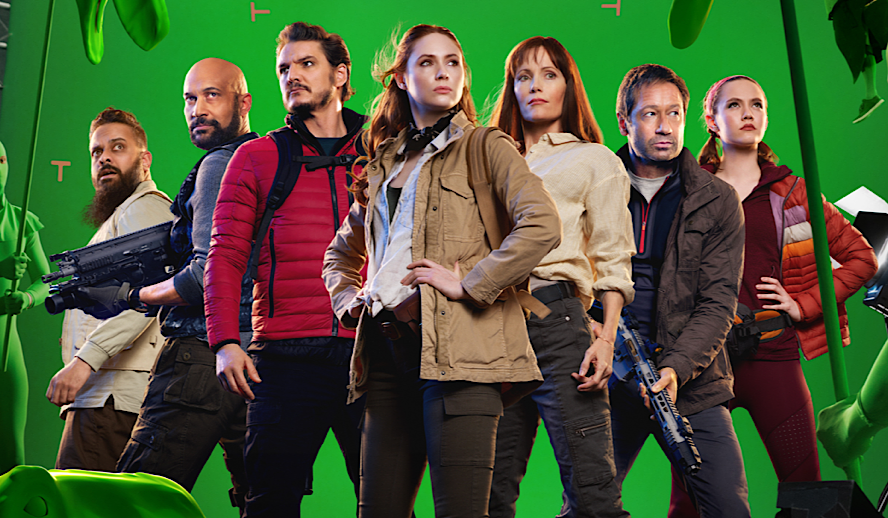 It’s always fun to see fictional media that revolve around the creation of other media. Whether this is an episode of a cartoon about the characters making a cartoon, a book whose main character is an author, or in today’s case, a film about a film undergoing a troubled production, it’s a setup that’s got a lot of potentials if tackled in the right way. Although I’ve never seen any films directed by Judd Apatow until watching the subject of today’s review, I was curious to see how a premise like this could be taken in a comedy of the outrageous R-rated variety.

‘The Bubble’ is the latest comedy film directed and co-written by Judd Apatow (‘The 40 Year Old Virgin’, ‘Superbad’). Set in the early days of the pandemic, the film follows a film crew staying at a fancy English hotel to shoot the sixth film in the popular in-universe “Cliff Beasts” franchise (a ‘Jurassic Park’ parody). Between the director’s incompetence and the extended amount of time the crew spends isolated from society, things gradually spiral out of control. With mishaps and conflicts piling up at an alarming rate, the actors begin to realize just how much of a living hell their situation is. The cast (of ‘The Bubble’, not Cliff Beasts 6) includes Karen Gillan, Iris Apatow, Pedro Pascal, and Fred Armisen.

‘The Bubble’ – Too Long, Didn’t Laugh

Despite some decent ideas it had going for itself, I found ‘The Bubble’ to be a thoroughly dull and unfunny film. The film’s narrative stops just short of two hours, which wouldn’t be a problem if it didn’t feel as unnecessarily repetitive as it did. Maybe it makes sense to hammer in the “trapped” feelings the actor characters go through, but the lackluster pacing hinders that idea. On top of that, the humor simply isn’t funny at all. The comedy is for the most part very cheap and basic, mostly revolving around tepid banter between the characters. I’m not sure how much was improvised by the actors and how much was in the screenplay itself, but very little of the intended jokes throughout the film landed.

Another issue is the lack of central focus given to any of the characters. Carol Cobb (Karen Gillian) is presented as the lead protagonist, but her character winds up blending in with the other characters, making it hard to determine who the central focus is actually supposed to be. This is thanks in part to the rather flat characterization that all of the actor characters suffer from. None of them are particularly unlikable in any way, but none of them are at all memorable either. While any great comedy film needs to first and foremost be funny, characters that stand out are another very important factor. ‘Ferris Bueller’s Day Off’ wouldn’t be as great of a film as it is if the titular character hadn’t had any of the personality he boasted. The Three Stooges wouldn’t be the icons they are if they didn’t have the personality that accompanied their well-timed slapstick.

All of the above isn’t to say there was no comedic potential whatsoever in ‘The Bubble’, as there were some decent scenarios that it offered. Throughout the film, there are several scenes of the crew filming the “Cliff Beasts” film against green screens. When this happens, we’re shown what this film would hypothetically look like up until the director character says to cut, which brings the perspective back to the green screen room. This leads to a setup that, on paper, sounds pretty funny; while a cliff-climbing scene is being filmed, one character gets sick and two others let go of the “cliffside” to start arguing, and since they’re all held up with ropes, it looks as if they’re hovering in midair. What unfortunately drags this scene down is the weak dialogue that failed to elicit so much as a chuckle from me, despite the actor’s best efforts. There are also a number of montages throughout the film where the film really starts to come to life, with quick cuts and a strong sense of energy that I wish the rest of the film had.

In addition to the interesting setup I mentioned earlier, the hotel the characters stay at itself is a pretty fun setting. It’s spacious and atmospheric, and the amount of land surrounding it reinforces just how far away from everyone is from the rest of civilization. While I stand by my issues with the pacing, I certainly didn’t mind the film revolving almost entirely around this location. Another thing this film could have doubled down on would be a commentary on unnecessary sequels. There are fleeting moments of it, such as a moment where one of the actors questions if a new “Cliff Beasts” movie is even necessary, and the film even opens up with a prologue about the in-universe franchise, showing off the various sequels it spawned, one of which appears to be set in space.

The commentary is there, yet it oddly doesn’t go much farther than that. The film more so puts an emphasis on Hollywood’s desire to create more “distracting” escapist content in the midst of the pandemic, hence the extreme measures the antagonistic director takes to get the movie finished. This is a fine thing to comment on, but it does feel strange how the aforementioned matter of shark-jumping sequels doesn’t come full circle in the same way.

Regardless of some of the mixed things I’ve heard about Judd Apatow’s filmography over the years, I had hopes going into ‘The Bubble’ that it could take advantage of its fun-sounding premise and be something that I’d come out of enjoying. Unfortunately, however, that just wasn’t the case. ‘The Bubble’ not only overstays its welcome, but has some of the flattest comedic dialogue I’ve seen in recent memory. As previously stated, I am unable to compare this film to Apatow’s previous hits like ‘The 40-Year-Old Virgin’, ‘Knocked Up,’ or the cult series ‘Undeclared’, so I can’t tell you if this is something that would hit harder for fans of his or not. I can say that on its own, ‘The Bubble’ isn’t something that I can in good conscience recommend, even to fans of raunchy comedy. I really like films that manage to make me laugh, be it through clever dialogue, shocking situations, or any other means, but this one just didn’t do it for me.

‘The Bubble’ is available to stream exclusively on Netflix.