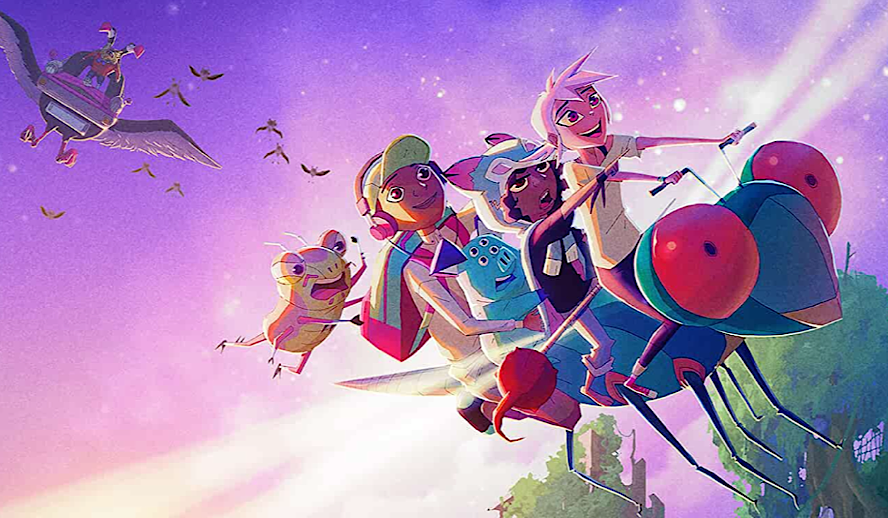 Photo: ‘Kipo and the Age of Wonderbeasts’/Netflix

In the vein of beloved animated series like ‘Avatar: The Last Airbender’ and ‘Steven Universe’, Netflix’s ‘Kipo’ is the next innovative adventure saga to steal the hearts of fans of all ages.

Modern times have become more and more reminiscent of a post-apocalyptic horror movie as 2020 trudges its way to a close. With the coronavirus pandemic raging, climate change intensifying, and a harsh divide in political ideology, the world today simply does not feel as welcoming and advantageous as it once did. The prospect of the end of the world is alarming to most, but to Kipo it’s only the beginning of a new adventure. In January of 2020, DreamWorks and Netflix released the first chapter of their collaborative series, Kipo and the Age of Wonderbeasts which has just culminated in the final third chapter that released this past October. The animated action-adventure follows the story of Kipo, a 13-year-old girl who emerges from her burrow and discovers the wayward states of surface life on Earth about 200 years from now. Over the centuries, mutations of animals evolved, known as “mutes”, had taken over the surface, and humans were faced with the decision to hide underground or fend for themselves against the overpowered mutations. As Kipo discovers, not all mutes are bad and light can still be discovered in even the bleakest of post-apocalyptic adventures.

Related article: Everything We Know About the Upcoming Live-Action ‘Avatar: The Last Airbender’

Kipo is a product of the minds that created some of DreamWorks’s most beloved films like Megamind and How to Train Your Dragon 2, illustrating just how much wondrous potential lies in store for unexposed audiences. The series is additionally bolstered by lively performances from an acclaimed cast of actors such as Karen Fukuhara as the captivating Kipo, Sterling K. Brown as Kipo’s heroic father, and Dan Stevens as the nefarious Scarlemagne. Besides the outstanding artists behind Kipo and the Age of Wonderbeasts, the series proves itself to be essential during the era of COVID as it provides a delightful and optimistic perspective on a world on the brink of collapse. As Kipo regularly scavenges for food and narrowly escapes death from enormous beasts, her upbeat attitude and interest in the bizarre reality around her never fades. In fact, the more change Kipo experiences the more she is invigorated and determined to make the world a better place.

As Kipo explores the ravaged world full of mind-controlling monkeys and rabbits the size of tanks, she defies the norm by befriending those who have become embittered by the harsh truths of a devastated reality, effectively justifying the value of hope in trying times. One concerning consequence of the events of 2020 is that they have allowed these feelings of fear and isolation to feel routine, which is why shows like Kipo are integral to remembering what makes the world worth appreciating. The way in which the show’s thematic core remains fixated on the importance of friendship in spite of overwhelming tragedy reveals that the true message of Kipo and the Age of Wonderbeasts is the ever-enduring power of love.

A World of Escape – ‘Kipo and the Age of Wonderbeasts’

On top of exuding a positive worldview in the face of inevitable calamity, now is the perfect time to explore the story of Wonderbeasts due to its exceptional escapist value. While it is important to maintain an optimistic disposition, there’s nothing like forgetting the horrors of reality and getting completely lost in an infatuating TV show. Very few series are as captivating and entertaining as Kipo, largely due to the insanely innovative worldbuilding executed by the creators and animators of the series. Taking place in the distant 2220, the world of Kipo and the Age of Wonderbeasts is striking in its familiarity to today’s but is enhanced with bizarre and inventive twists that transform the show into a spectacle.

For example, as the group of friends embarks on their quest to find Kipo’s father, they quickly end up at what the audience knows as Hollywood’s legendary Griffith Observatory. In the Age of Wonderbeasts, however, the observatory has become taken over by foliage and now serves as headquarters for a pack of “mute” wolf scientists. Another example is found in the mute rat-ran theme park, “Ratland”, a whimsical imagining of how the legacy of Disneyland would live on after global catastrophe. These instances convey the impressive balance between the familiar and the fantasy that makes the world so alluring and accessible to escape into.

In addition to recognizable location, fantastic elements interact with the recognizable in the form of Kipo’s most exciting story components, “mutes.” As previously explained, mutes are a product of the post-apocalyptic world that Kipo and her friends inhabit and they range from adorable pigs with four eyes to sadistic, oversized flamingos with two hostile heads. These fantastic creatures are the best representation of the eccentric and playful spirit of the series as a group of jacked lumberjack cats are just as adorable as the clan of mind-controlling monkeys in royal 18th-century garb are menacing. These fantastic elements harmonize gorgeously and result in a world that is vibrant and ripe for exploration.

Other elements that contribute to the irresistible escapism of Kipo can be found in the use of modern pop and R&B music, adding another enchanting layer to the show’s rich texture. All of these compelling components make the invigorating action sequences just the icing on the cake. When taking on monstrous “mega-mutes” or groups of villains at a time, the five main characters leap into combat similar to that of an Avengers film, often utilizing a creative and visually astonishing strategy that proves mesmerizing to behold. Basically, it’s a pleasantly impossible task to worry about real-life while experiencing the abundantly entertaining world of Kipo and the Age of Wonderbeasts.

The Importance of Representation in the Age of Wonderbeasts

The accomplishments of creating a show that aids audiences in establishing an optimistic worldview as well as distracting audiences from reality’s distressing current events is massively remarkable in itself; however, the inclusionary nature of Kipo and the Age of Wonderbeasts is what makes the series one of a kind. The conversation of representation in film and TV is a necessary one as it is imperative that audiences are able to see themselves in characters they watch in order to manifest happy and successful lives.

When a group of people are consistently represented in a negative way or are not represented at all, in film or television it harms not only the marginalized view of themselves but society’s view of the ostracized. Kipo is exemplary in its empowerment and representation of characters of color as well as queer characters. The main trio of protagonists are all of color, and of those characters, Benson is introduced as gay in the most casual and satisfying manner. Being gay is not something that he feels at conflict with, rather his queerness is something he holds as a pillar of his identity. As Benson explores relationships with boys throughout the series, Kipo both normalizes the queer experience as well as paints a precedent for the future we must all aspire to achieve.

The inclusive and inspiring journey of self-acceptance is best symbolized in Kipo’s experience realizing she is half-mute. This is a twist that is revealed early on in the series, and it is the principal conflict that Kipo battles throughout the show. When Kipo discovers she is changing and transforming into a mute, she experiences many feelings that those of the LGBTQ+ community encounter when first coming to grips with their identity. Initially feeling scared and alone, Kipo spends time wishing she were a normal human and often wonders if her friends and family will accept her as a mute; however, as Kipo’s epic adventure unfolds, she becomes the truest form of herself which proves to hold the power she needs in order to save her family and friends from the malignant forces that threaten them.

In its truest form, Kipo and the Age of Wonderbeasts is a tale of fantasy, action, and acceptance, exhibiting the best of humanity even in the face of the end of the world. As we struggle to navigate the drastic changes our society and planet face in reality, Kipo’s prophetic message of acceptance, love, and enthusiasm for the world solidifies the series as an ode to those who have not yet lost hope.