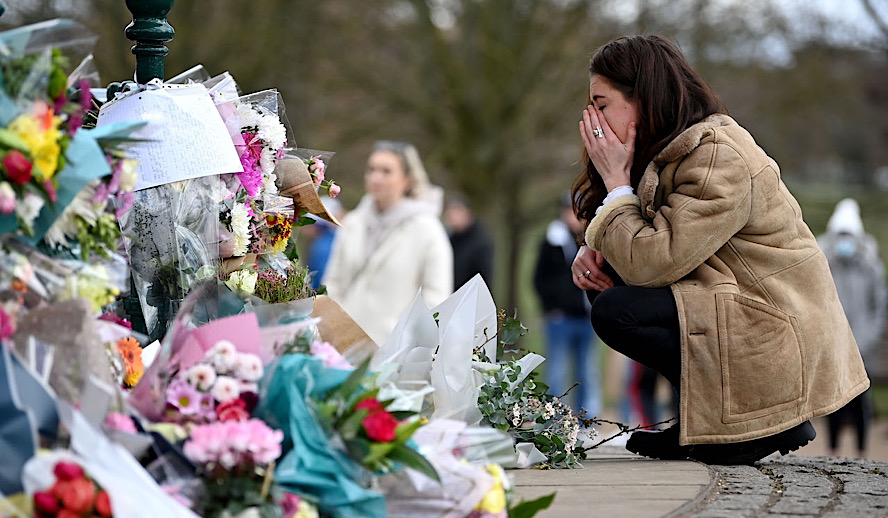 Hollywood Insider would like to send our condolences and respects to Sarah Everard’s family and friends. Violence against women must end. Full stop. No explanation required.

On March 3rd, 2021, Sarah Everard was walking home from a friend’s house. She was wearing bright clothing and talked to her boyfriend about where she was. As well as that, Everard was walking on the main road and was even seen in CCTV footage from a passing bus. Everard did everything right, everything women are taught to do in order to protect themselves, and still, she disappeared.

Her remains were found on March 10th and confirmed on March 12th. Everard did everything right, so what went wrong?

Related article: ‘I May Destroy You’: Michaela Coel Tackles Enduring Trauma And Finding Life Beyond It #metoo

Since the disappearance and confirmed murder of Everard, the issue of women’s safety has been at the forefront of many discussions. For instance, Cressida Dick, Britain’s highest-ranking police officer to try and say that fortunately, it is very rare for women to be abducted from the streets. While Dick meant well, it was clear that she was missing the point. In return, Jess Phillips read a list of women and girls who had lost their lives to men in the past year. The list took over 4 minutes to read and even included a young girl who was stabbed to death only two days after Everard disappeared. It’s clear that no matter what the police say, violence against women is a very prevalent issue.

Everard’s murder also brings attention to the societal norms revolving around women’s issues. For instance, there is a lot of misogyny against women and victim-blaming when a woman comes forward about being assaulted or sexually harassed. “What were you wearing?”, “Well, it’s your fault for staying out so late,”, “You were asking for it,” are only a few comments that women who have been sexually assaulted experience. On the other hand, men who commit the acts are rarely held accountable for their occasions, except for women.

The responses to women and men coming out about being sexually assaulted are widely different too. Women usually receive more doubt than men, while men are hailed as brave and heroic for speaking about what happened to them. This is one of the reasons why the majority of women who experience sexual assault are afraid to come forward. Nearly 1 in 5 women have been sexually assaulted and nearly 1 in 71 men have been raped. Statistically, the majority of people who are assaulted are women but again, many don’t speak up because of a fear of being judged.

When Statistics Become Reality – My Experience As A Woman

Another harmful generalization is how normalized it is for women to be harassed or attacked in public. As a woman myself, I can’t tell you the number of times I’ve been shouted at by men in the city or even back home in the suburbs. It’s become normal to shout at women in order to get their attention or try to sexually harass them. You don’t see women doing that to men. I’ve lived in North Philadelphia for the past year and a half because of school. In that time, I’ve only become more and more aware of how small I am compared to men. I’m a little under the average height and there is nothing more terrifying than walking at night.

Usually, I don’t leave the house at night unless I’m with male friends. On the rare occasions, I leave my apartment with my roommate, we’ve gotten catcalled and one man even tried to follow us home. We had come back from the grocery store and were walking along the main road when I noticed someone push themselves off a wall and begin to follow us. He only took a few steps before a random male stranger turned the corner and our follower retreated. The creepy man leaned back against the wall and we continued walking home.

Another instance of how disadvantageous societal norms as per how women and men are raised. Women are always taught to be small, to let the men speak first, and not to correct anyone’s behavior in fear of coming off as rude. We’re taught to put our keys between our knuckles when we’re walking home and to check the backseat of our cars before we get in. We’re taught never to go to a party alone or take a drink from a stranger or sip from a drink once it’s been set down.

And when women come forward about these safety measures that they’ve had to implement, men often criticize them. In times like this, where violence toward women by men is more prevalent than any other assault, it’s important to listen to female experiences. This isn’t the time to get offended or defensive, it’s a time to learn. Men and women have extremely separate issues and one gender has x issue harder than the other and vice versa. However, in instances like this, it’s important for men to be educated on how terrifying they can be.

Some men may be offended when a woman generalizes how scared she is of men or how she doesn’t want to walk home at night, but it’s a true feeling. Although North Philadelphia makes most people, even men, afraid to walk alone at night the experiences are different. I’ve had male friends who have been mugged and beat up, but that happened by other men.

The most important scenario to think about right now if you cannot understand how terrified women get about being mugged is a fairly simple one.

Imagine you’re walking home at night and you pass an alley. Before you know it, someone has an object jammed into your back and demands that you give them money. They threaten you and force you into the alley against your will. When you think of this situation, do you picture a man or a woman robbing you? It’s that simple.

What Happens When The Police Are The Criminals?

When the news was announced that Everard was abducted by a policeman, all hell broke loose. It also brought to life a new fear, what do you do if the people who are supposed to protect you are the ones committing the crimes? The Metropolitan Police, or Scotland Yard, has come under a lot of scrutiny and accusations that other policemen helped deflect attention and aid Wayne Couzens, her killer. Besides those accusations, British citizens are outraged after a vigil at Clapham Common in London turned violent. Police originally arrived to clear crowds out because of coronavirus restrictions but the crowds quickly became too much to handle.

What started out peaceful became much more dangerous as police started to roughly grab women and pull them away from the vigil. Many women were handcuffed and spectators also said that police purposely trampled bouquets of flowers set out for Everard. Sides were split between who was right because the group that organized the vigil went ahead after the event was cancelled. However, the violence should never have happened and the police officers were condemned for that. The next night, March 14th, more vigils were held but none became violent. At many of the vigils, police were behind barricades and monitored the vigils to make sure nothing happened.

No matter which side was right or wrong, the Metropolitan Police are under heavy scrutiny. The citizens of the United Kingdom want to make sure nothing like this will never happen again and are putting intense pressure to make sure of it.

The disappearance of Sarah Everard is extremely recent and details are still being finalized. It’s been almost two weeks since she disappeared, but the aftershocks are becoming more and more powerful. Her case has caused public outrage, especially in the United Kingdom. Protests erupted over the U.K. and many women were coming forward about their own experiences of harassment and were demanding more action from Boris Johnson. The Prime Minister has condemned what happened to Everard and vowed to do more in order to protect women.

One of the biggest statements being thrown around right now is the comment “not all men”. It’s often used, by men, to defend themselves from blanket states about how dangerous men are. While the overall statement is true like not all men assault women, not all men murder women, etcetera, it doesn’t help in circumstances like this. Everyone knows that every man is not a murderer or a rapist but if 1 in 5 men is a rapist and the other 4 do nothing to stop him or correct his behavior, then it’s like the other 4 men aren’t even there. Not all men commit violent crimes, but the number that does is alarming enough.

In a conversation, the phrase “not all men” is often used to sidetrack the dialogue or for men to defend themselves. The real question we should be asking is this if a blanket statement i.e. “I’m scared of men because they could assault me” offends you and makes you defensive, then who’s really the problem?