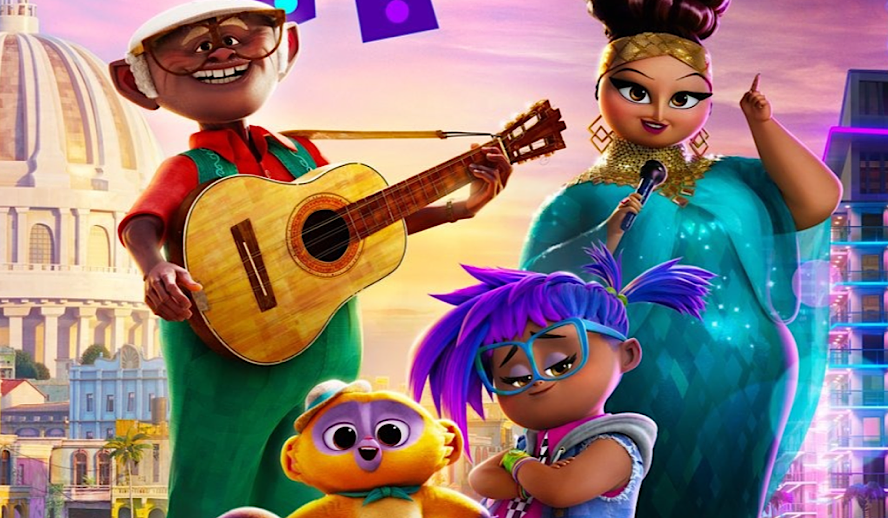 New to Netflix this week is the animated musical ‘Vivo’ from executive producer and star Lin-Manuel Miranda of ‘Hamilton’ fame. The film follows a kinkajou living in Cuba named Vivo, portrayed by Miranda, who must begin a journey to travel to the United States in an effort to deliver a song to a lost old friend. The music of the film was co-written and composed by Miranda and partner Alex Lacamoire, who worked on musicals such as ‘In the Heights’ and Hugh Jackman’s ‘The Greatest Showman’, and features all original music.

‘Vivo’ is a film that is incredibly old-fashioned, giving off a feeling of comfort and familiarity as it tells its story. While at points the conventionality of its story can begin to weigh on the viewer, the characters, beautiful animation, and music elevate the film enough to deliver an enjoyable experience to any and all audience members.

What Worked: Music and Animation

When discussing this film, one must start with the music. The original songs and score for the film are exceptionally well done with few expectations. Songs, such as the opening number, often employ the sing-rap style that Miranda has become known for that was executed tremendously in films such as ‘In the Heights’ by actors Anthony Ramos, Melissa Barrera, and Corey Hawkins. What was very cool to hear is that much of the music felt like a melding between Miranda’s modern style and what seemed like authentic, traditional Cuban music. While I personally am not very educated in traditional Cuban music so taking my opinion with a grain of salt would be wise; however, the music seemed very authentic during my viewing. One of the highlight songs of the film comes from Brian Henry Tyree’s character. Similar to other musicals, specifically ‘In the Heights’, the film delivers exposition through its musical number. This is a very clever way to lay the groundwork of one’s story without feeling too on the nose with its delivery.

The animation in the film is fantastic — Par for the course for Sony Pictures Animation, the production company behind Phil Lord and Chris Miller’s ‘Spider-Man: Into the Spider-Verse’, the film looks excellent. Especially in the opening sequence, the animators find unique and interesting ways to angle the “camera”, framing the picture in ways that are visually interesting. The animators do a great job of balancing noise in their animation — when there is a lot going on it is easy to have the image feel overcrowded and too busy.

Luckily, the animators find the perfect balance for many sequences that could have easily become visually overbearing such as a sequence in a big city or cruising down a river in the rain. What could have been a visual burden actually becomes a visual delight which is a testament to the prowess of the animators. The animators also switch up their animation style at some points in the film opting for sequences to be in 2D animation a la Disney’s ‘The Princess and the Frog’. As it is used to demonstrate a shift in mindset, it works very well as a style. Sony Pictures Animation proves yet again to be steep competition to that of other major animation studios such as Pixar.

What Worked: The Characters and Plot Structure

The characters of the film are a significant highlight. Lin-Manuel Miranda as Vivo is an incredibly endearing character — From start to finish, one will find themselves rooting for the success of Vivo’s journey and will find themselves laughing and tearing up as the story progresses. Ynairaly Simo portrays Gabi, a young girl who aids Vivo on his journey. Simo’s voice portrayal of Gabi is a standout performance in the film and her character’s arc is a perfect complement to that of Vivo’s. Some other notable performances come in Michael Rooker, of James Gunn’s ‘The Suicide Squad’, and his portrayal of a villainous snake as well as ‘Avatar’ star, Zoe Saldana’s portrayal of Rosa.

The film introduces all of its characters effectively and efficiently, lending itself to a very gripping opening act that will lock you in and a third act that delivers on the promise of its premise. While the second act is most certainly its weakest, it does have a couple of intense and fun chase sequences that were enjoyable to watch. While an overall familiar story, the filmmakers tell it effectively enough for it to still work.

The main issue with the film has already been alluded to – its conventionality. The film does not break any barriers with its story and is one that has been seen before in other variations. However, the characters in the film and their arc help to elevate the story, making the fish out of water journey to a new place plotline feel much fresher than it could have. While never a deal-breaking issue, the familiarity of the story hampers the second act of the film. The film opens with a bang but begins to lose steam until it finishes strong.

While this isn’t a huge problem, as if a film is to have one act stand out as the weakest, the second will be the least detrimental to the overall film. Generally speaking, crafting a plot that was a little more unique could have led to a more innovative film. However, ‘Vivo’ is a film that intends to be old-fashioned and familiar; in an odd way, this is both its draw and its Achilles heel so understanding what the film is before a viewing will be key. The only other real complaint comes in the form of one of the film’s songs that, unlike the rest, just did not work for me; this could just be chalked up to taste, however.

‘Vivo’ is a well-animated, enjoyable film that will most certainly have kids and fans of Lin-Manuel Miranda’s style of music engaged. While suffering from some conventional story beats, the film overcomes its flaws with its, mostly, terrific musical numbers and excellent characters. Knowing what you are in for when deciding to give the film a watch will be important in regards to the film meeting your expectations, however, I can firmly say I recommend the film for anyone in the mood for a fun, old-fashioned musical filled with heart.

Watch ‘Vivo’ on Netflix today. Be on the lookout for Lin-Manuel Miranda’s next project, writing lyrics for Rob Marshall’s live-action adaptation of ‘The Little Mermaid’ which completed filming this summer.