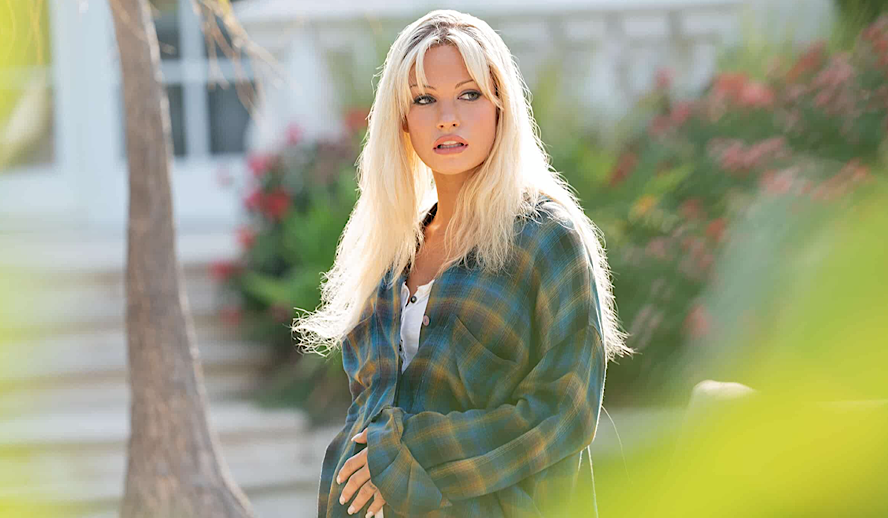 The Hulu mini-series is based on a Rolling Stone article “Pam and Tommy: The Untold of the World’s Most Infamous Sex Tape” by Amanda Chicago Lewis and it’s describing the story of how Pamela Anderson and Tommy Lee’s sex tape was stolen and released. The series was first announced in 2018 under Seth Rogan and Evan Goldberg’s production company Point Grey Pictures and James Franco was attached to the series to direct and play Tommy Lee. Then by December 2020, Franco left the series and Hulu decided to greenlight the project with an eight-episode limited series order. Anderson reportedly did not want to be involved in the series at all, while Lee supported the series but also didn’t want to be involved.

Along with the eight-episode limited series order, it was announced that Lily James was cast to play Anderson and Sebastian Stan was cast to play Lee and they had to undergo a long make-up process to look like Anderson and Lee. James had to wear a blonde wig, dentures, blue contact lenses, prosthetic forehead, and chest, and Stan grew out and dyed his hair, wore brown contact lenses, prosthetic penis, and pierced nipples, and spent hours getting up to 30 tattoos painted on him. Their wardrobe was not custom made, but it was purchased second-hand based on the clothes that Anderson and Lee wore during 1995-1998.

As someone who was born in the 2000s, this show took me back in time to the early internet days when people were still learning about how to use it. ‘Pam and Tommy’does an amazing job at setting the atmosphere of the late 90s, from the clothes, sets, and actors, it really does feel like you’re back in the 90s and it doesn’t ruin the experience when watching. Also, I loved the way the series gives you different perspectives, often flipping between Rand Gauthier (Seth Rogan) and Anderson and Lee’s perspective. When watching, it’s important to remember that these are real people and character interactions are dramatized to make the series more entertaining.

Before watching this series, I didn’t know about Anderson’s sex tape, probably because it’s been forgotten and what my generation talks about is the Kim Kardashian sex tape. Watching the story unravel was interesting because it was the early stage of the internet so the sex tape was sold on VHS tapes but it was easy for Lee’s private investigator to find who stole the tape because the website had Gauthier’s address. At the beginning of the series, it felt like a revenge story because of the way Lee treated Gauthier and it makes the audience be on Gauthier’s side because Lee was painted like a villain.

You start to root for Gauthier to steal the tape because all you get is his point of view and you understand his frustration, you don’t see Anderson’s or Lee’s point of view about the tape until episode four. However, I like the way the series set up the episodes because, in the second episode, we see how Anderson and Lee’s relationship began. In the beginning, it seems like they’re only physically attracted to each other and don’t have anything in common but as the relationship grows you see Lee being supportive of Anderson’s acting career and doing anything to protect her.

While their relationship moves fairly quickly, I believe the honeymoon stage made their relationship successful in the beginning because they’re so infatuated with each other, their each other’s ride or die. I understand it’s a limited series, so they couldn’t go in-depth with their relationship but I think the series did an amazing job at showing how toxic their relationship got. Lee’s hot-headed while Anderson is cool and collected, Lee’s actions is what got the sex tape leaked because Gauthier only wanted to get revenge on Lee and not think about repercussions Anderson will face as well.

The Tape and Karma

Anderson didn’t deserve all the backlash she got and the series shows how different Anderson and Lee got treated when the tape was leaked. It’s sad nothing has changed since then, if a woman’s nudes get leaked then her career is in jeopardy and she feels violated because it will never go away. I like how the series shows the legal side of things and how fast something like this can spread because compared to today, it’s ten times worse. Things got out of control really fast during the series, you feel terrible for Anderson because she didn’t do anything to deserve the tape getting leaked.

I also really appreciated how the series touched on that people used Anderson being in Playboy and being a sex symbol as an excuse to why Anderson shouldn’t feel upset about the tape getting leaked. Lily James did a phenomenal job as Anderson because she really embodies the role, she isn’t playing Pamela Anderson, she is her. James definitely carried the series and it was perfect casting, I can’t see anyone else in the role.

The only time I did get distracted is when I noticed Seth Rogan in the first episode because Rogan is an icon and I wouldn’t think he would casted in something like this but he genuinely surprised me. The more time we spend with Gauthier the less I see of Rogan and he did a great job portraying Gauthier as a guy who’s frustrated with his life and wonders why bad things keep happening to him. The series does mention karma which is funny because when watching I said out loud karma is the reason why his life didn’t magically improve after getting revenge. You don’t feel bad for Gauthier because he hurt Anderson in many ways and you feel good knowing Gauthier didn’t benefit from the situation. The only beef he had was with Lee and should’ve gone to trial instead of him stealing the tape because no one benefited from the situation except for the founder of Internet Entertainment Group, Seth Warshavsky (Fred Hechinger).

The Greatest Love Story Ever Told

In the end, it’s a tragic love story that could’ve been avoided if Lee would’ve just paid Gauthier and the last episode shows that the tape ruined their relationship. Sebastian Stan does an amazing job in the last episode because it is scary how he portrays Lee being violent and angry towards Anderson and it shows how bad their relationship got. How Lee acted towards Anderson shouldn’t be forgiven but it shows how a relationship can start off as rainbows and butterflies then end with fire and destruction. ‘Pam and Tommy’ does a great job at showing every side of the story the best they can. However, I can’t wait till Pamela Anderson’s documentary on Netflix releases to get the full side of her story.