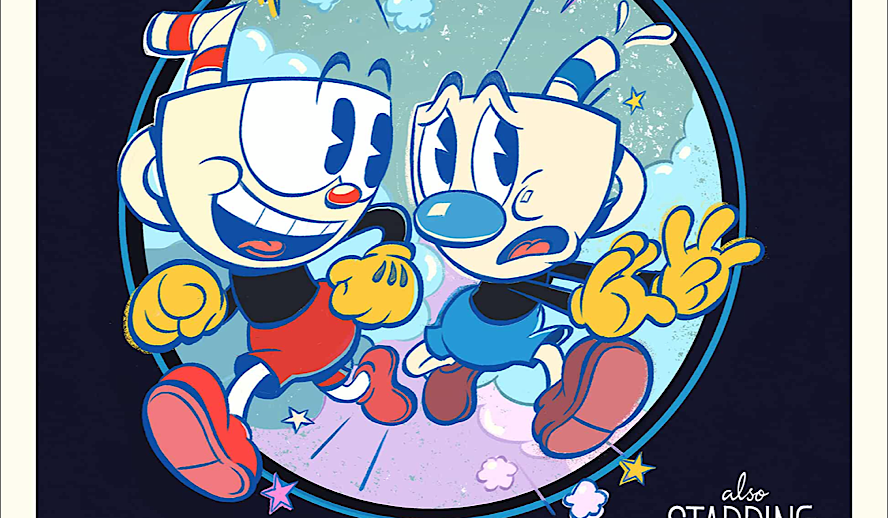 It seems like such a long time ago that a Netflix animated series based on the hit indie video game ‘Cuphead’ was announced to be in the works…but that’s probably because said announcement happened two-and-a-half years ago, back in the Summer of 2019. But as they say, good things come to those who wait, and after those two and a half years, ‘The Cuphead Show’ has, at last, made its debut on Netflix. But before I start to talk about it in detail, a little context is in order. ‘Cuphead’ (or ‘Cuphead: “Don’t Deal with the Devil”’) is a run-and-gun platformer game developed by Studio MDHR that came out in late 2017.

The game was an immediate success, thanks in part to how its entire aesthetic was modeled after old-school cartoons such as the works of Fleischer Studios. The game revolves around the titular Cuphead and his brother Mugman, who wind up betting their own souls against the Devil himself in a game of Craps. After losing, they make an agreement with the Devil to collect the souls of everyone in debt to him in exchange for keeping their own. The game’s upbeat and lighthearted nature keeps this rather grim-sounding story from coming off as too dark. Since its release, the game has spawned a very dedicated fanbase.

Fast forward to the present day, and the aforementioned Netflix show is now available to stream on the platform. ‘The Cuphead Show’ follows the adventures of the two liquid-container-headed brothers, who are prone to getting into all sorts of shenanigans. The Devil from the game serves as the show’s antagonist, only the story surrounding him has been modified to better suit the show’s narrative. In the first episode, Cuphead accidentally loses at a skeeball game in a carnival the Devil was secretly running. Unfortunately, the price of this loss is one’s soul, and the Devil wastes no time in trying to seize Cuphead’s. The show alternates between this plotline and more episodic stories about the brothers. The show stars Tru Valentino as Cuphead and Frank Todaro as Mugman.

‘The Cuphead Show’ – A Standalone Success

Right off the bat, I’d like to admit…I’ve never actually played ‘Cuphead’, so my knowledge of the world and characters is fairly limited. However, I’m someone who is and always has been big on animation of just about any kind. I’m fully willing to admit just how much I love cartoons, so a cartoon based on a cartoon-inspired game was right up my alley. With all of that in mind, I am pleased to say that this show, like any good adaptation, requires no knowledge of its source material in order to be properly enjoyed. ‘The Cuphead Show’ is very fun and fast-paced, with absolutely no shortage of wacky slapstick, humorous expressions, and visual gags to keep its target audience entertained.

The stories are also well varied, utilizing different kinds of setups and locations. The humor itself isn’t anything too groundbreaking, with a lot of it feeling like the stuff typically seen in modern American cartoons, but that’s not to say that this show didn’t ever catch me off guard with some surprisingly funny jokes, such as when Cuphead and Mugman are walking through a graveyard and denying how scared they are in increasingly aggressive ways. Some of the visuals are also very creative and help give the show a proper sense of personality. The ever-changing facial expressions in particular work wonders, some of which seem to channel ‘Ren & Stimpy’ style energy (which makes sense, considering that was a show that also carried a heavy old-school flair).

On top of story and humor, ‘The Cuphead Show’ does a great job utilizing the retro-cartoon aesthetic seen in the game it’s based on. The color scheme, character designs, and backgrounds are all on point and look like they belong in an old animated short from the early days of animation. Being as overly-observant as I am, I couldn’t help but notice that most of the animation itself is tweened instead of every frame being drawn traditionally, which may be a bit of a disappointment for more hardened animation fans, but it’s so expressive and energetic that I honestly didn’t mind it myself. Other graphical touches include the subtle use of film grain, as well as the occasional use of model sets as background environments. This inclusion of sets is more than likely an homage to the setback camera, or “stereo-optical process” developed and patented by Max Fleischer, in which animation cels are set up in front of miniature sets to give a three-dimensional look to scenes.

Aside from visuals, this show’s soundtrack, composed by Ego Plum, also contributes wonderfully to the show’s tone, taking after the kind of big band music often heard in cartoons from the Golden Age of animation. There are also occasional musical numbers that, thanks to the show’s setting, never feel like they’re shoehorned in; they flow naturally into the episodes that include them. The song that the Devil introduces himself with, which happens to be my favorite number of the bunch, clearly takes inspiration from Cab Calloway’s early 30’s hit Minnie the Moocher, which fits perfectly, considering the song was sung by a sinister character in a ‘Betty Boop’ cartoon of the same name. It’s very clear the people behind this franchise not only have a deep appreciation for the cartoons that inspired it, but know how to properly pay tribute to them.

Considering how immensely popular the original game was, this show clearly had big shoes to fill. While I personally can’t say whether or not it filled those shoes, I can say that it is certainly a fun time. ‘The Cuphead Show’ boasts the kind of flair generally reserved for Saturday morning cartoons, which seems to be just what the showrunners were going for. I could definitely see my younger self eating this up if I were to catch it airing on such a day. Of course, we live in a world dominated by streaming now, and thus can watch anything we want at any time, but I digress. ‘The Cuphead Show’ may occasionally fall a bit flat in the humor department, but it more than makes up for it just about everywhere else. If you have any sort of interest in cartoons, this one is worth checking out for sure. Heck, the sheer amount of effort that went into this show’s aesthetic alone makes it worth at least giving a chance, even if kid’s cartoons aren’t normally your forte.