‘Blithe Spirit’: The New Ensemble Film From Edward Hall Asks the Dramatic Question, “Is There Life After Death”? 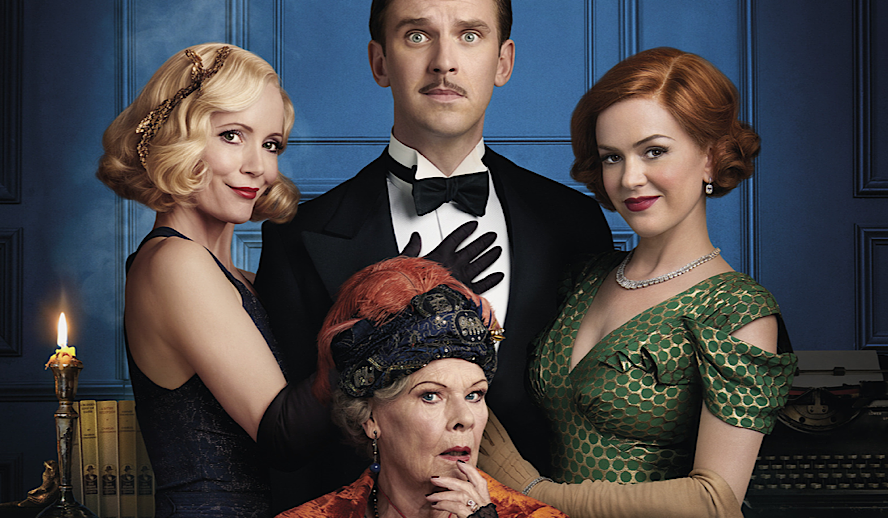 ‘Blithe Spirit’ follows struggling writer Charles Condomine (played by Dan Stevens) as he calls on a spiritual medium (Judi Dench) for aid in getting over his writer’s block. However, the séance has unintended consequences, bringing back the ghost of his ex-wife Elvira (Leslie Mann), who threatens his marriage to Ruth Condomine (Isla Fisher)

‘Blithe Spirit’ is an ambitious film utilizing a dazzling ensemble cast – but ultimately fails to follow through on the unique conceit put forth by its source material, the play ‘Blithe Spirit’ by Noel Coward. However, if you’re a fan of the star-studded cast and enjoy films set in the decadent Golden Age of Hollywood, you may still enjoy this film.

An Ensemble Piece Struggling with Character

Though ‘Blithe Spirit’ is marketed as an ensemble performance, the actual cut portrays a more focused story on the love triangle between Charles, Ruth, and Elvira – with Judi Dench’s character Madame Arcati largely on the sidelines. This means that Charles’ character is front and center, his attention being battled for by his two lovers. However, the film fails to portray him as a likable character worthy of this attention, making it hard to sympathize with his situation. Throughout the film, he panders to both women, unable to stay faithful to his current wife (Ruth) after promising her his affections. In fact, he flips back and forth so much that it’s difficult to ascertain where his true affections lie. Though this indecisiveness is at the heart of Charles’ plight as a character, it’s perhaps done to too far of an extent. In the movie, he simply doesn’t seem worth fighting for. In the end, there definitely is some payoff in regards to his seedy, selfish personality – but the question is, is it enough?

The secondary story of Madame Arcati starts out with a bang; during a performance, Arcati is revealed to be faking her clairvoyant abilities, setting her on a path to re-establish her reputation. However, Judi Dench’s abilities are far underutilized in this character, whose screen time is shelved as the film progresses. Ultimately, Madame Arcati seems to abandon the goal of saving her reputation, primarily serving as Ruth’s spiritual guide, a telephone call away, in the rest of the film.

As a whole, it’s clear that ‘Blithe Spirit’ is trying to achieve the tone of ‘Knives Out’ – with a flashy, ensemble cast and witty, relatable humor. However, ‘Blithe Spirit’ lacks the punchiness and deep character relationships needed to reach that level. To be clear, these high caliber and well-regarded actors embody their roles well; however, the film itself fails to support their talents and give them enough material to shine.

‘Blithe Spirit’ – The Translation from Play into Film

‘Blithe Spirit’ was an anticipated release due to its famous source material – a play of the same name by Noel Coward. Regarded as a classic comedy, the play has been put into production several times, from its inaugural run in 1941 to its latest adaptation in 2015. However, the film crowd is quite different from the theater one, and several aspects of ‘Blithe Spirit’ have perhaps not translated as well as they were expected to.

Quite simply, the film deals with many ideals that may seem outdated to modern audiences yearning for diverse and unique stories. Aside from having an all-White cast, which is simply a result of the source material, the film deals with the divide between rich and poor, as well as many marital issues.

Not far into the film, it is revealed that Charles had never written any of his famous novels. Instead, Elvira (his wife at the time) had written them for him. With Elvira now as a ghost, Charles still calls on her to essentially write his new screenplay, as he suffers from writer’s block. Elvira enthusiastically obliges, reciting line for line what Charles should input on his typewriter. Instances like these really highlight the power difference between husband and wife, not only in this society but engrained and encouraged by these characters. Aspects like these simply aren’t as palatable to contemporary audiences.

One thing ‘Blithe Spirit’ does well, however, is to create a fun and engaging world. Delightful production design – headed by John Paul Kelly, whose credits include ‘A Theory of Everything’ and ‘The Guard’ – immerses audiences into a flashy, 1930s era world. The Condomine couple themselves are quite well off, living in a sprawling estate complete with a scenic overlook and topiary garden. Even the maid’s kitchens are dressed in eye-catching, turquoise shades and modernist décor. Ruth and Elvira are adorned in several stunning pieces and perfectly set hair, always the picture of perfection, with Charles donning several tailored suits. While most of the film takes place in the Condomine estate, there’s also a great scene at the beginning of the film taking place at a palace-like auditorium, where Madame Arcati conducts a psychedelic show. For anyone needing to get away from the drab of COVID-19 quarantine life, ‘Blithe Spirit’ can serve as a great escape into more fashionable, luxurious days.

With Charles Condomine’s character struggling to write a screenplay adaptation of his renowned novel, the film is also set in the Golden Age of Hollywood. In several scenes, we see the Condomine’s visit a studio set, where Ruth’s father is in charge, to scope out Charles’ career possibilities. There are fictional cameos from famous directors such as Alfred Hitchcock and Cecil B DeMille – great easter eggs for cinephiles – which really cements the film’s delightful worldbuilding. This effective production design is also aided by vivid and rich cinematography, offering images full of depth and dimensionality. With largely still frames, audiences will be able to take in the beauty of this world to the fullest.

Ultimately, ‘Blithe Spirit’ might not be for everyone. However, if you love the star-studded cast and enjoy films set in the fantastical Golden Age of Hollywood, you should definitely check it out!