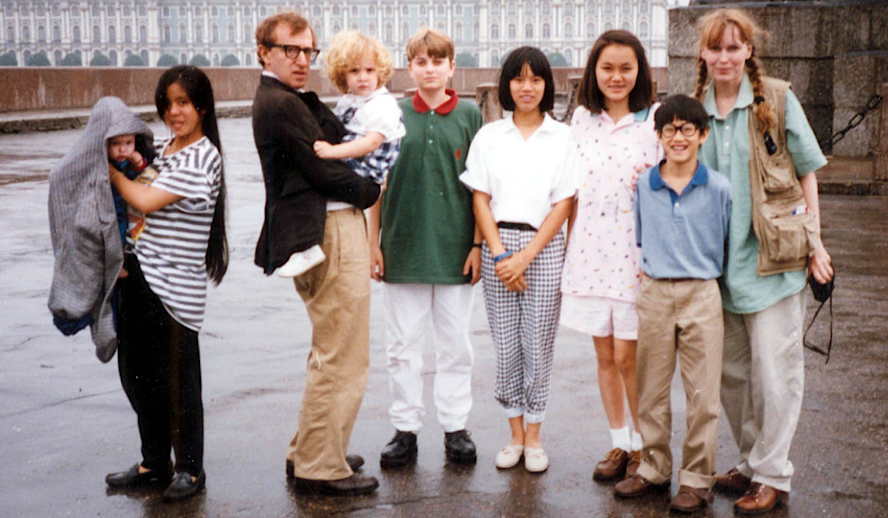 After the world spent decades avoiding it, a major network finally brings to light one of the most controversial topics in entertainment; Woody Allen. As attention to unethical and wrong behavior by powerful people has increased, along with the consequences, it’s now only a matter of time before the truth comes out, and their prominence cannot shield them from justice. Structurally and stylistically, ‘Allen V. Farrow’ stands on the shoulders of the powerful social shift that’s been going on since the #MeToo movement and pushes forward survivor progressivism in an engaging and entertaining way. The series is directed by Kirby Dick and Amy Ziering, and they did an excellent job in all aspects of the production and storytelling, especially speaking fairly to both the Allen fans that refuse to believe what he did is true and refuse to dismiss him, and the people who support Mia Farrow and her family and believe their truth.

Related article: ‘I May Destroy You’: Michaela Coel Tackles Enduring Trauma And Finding Life Beyond It #metoo

The directors made sure to put all pieces of the puzzle on display. Allen’s successes are not shied away from, and the love people have for him and his work is conveyed objectively through the series. The point of view noticeably shifts to revealing the horrors behind the screen, and what Allen was like in his personal life. What’s impressive is the filmmakers don’t portray Allen as an overall monster, they ensure all the details about his personal life are included, leaving viewers to interpret the content for themselves. However, the real-life accounts and direct conversations with members of the family, along with their friends, slowly pulls the curtain back on the breadcrumbs that lead to Allen’s actions. They provide credible evidence that isn’t widely known either.

HBO’s ‘Allen V. Farrow’ does not shy away from the gritty details, and doesn’t try to hide the fact that filmmaker Woody Allen has a lot of positive traits that have helped him maintain his iconic status for so long. Episode 1 of the docu-series presents itself as transparent in the conversation and allows the people who were actually involved to tell the story. Dylan Farrow, after being out of the spotlight for a long time up until a few years ago, bravely gives her account of her past, along with her relationship with Allen. It’s startling and sickening to see the trauma that Farrow has faced since she was a child, and the authentic pain she feels transfers to the viewer. Mia Farrow maintains an honest poise and expresses the personality the world has loved for half a century now. Seeing the terrible things she has gone through after she’s been such a caring mother for adopted and biological children of hers makes it clear why she’s stayed out of the spotlight for so long.

For the several fans of Woody Allen’s work, and the countless entertainers who attribute him to be one of their influences, this docuseries will be jarring to watch. However, staying committed to the truth and factual evidence that’s revealed is imperative. The argument of separating the art from the artist collapses during a surface-level analysis of Allen’s work in tandem with the accusations made against him. His work often features older characters, usually played by him, with young women, and in one instance, one under the legal adult age of 18. Combining this with the fact that he had an affair with one of Mia Farrow’s adopted daughters, Soon-Yi, who Allen had known since she was a child, when she was in her late teens and early 20s and he was in his mid-50s, it becomes clear that these accusations do not stray far from the truth of Allen’s actions.

As with any great artist, it’s difficult for many to detach from their work and the positive impact it’s made, which causes many to continue to support artists regardless of what they’ve done in their personal lives. As history has shown, this only worsens the epidemic in which predators are able to roam freely with no consequence. This docuseries seems well organized and objective enough to hopefully progress the societal shift to believing survivors and punishing predators more in the future, and the credible evidence it delivers should be more than enough for the general public to understand what really happened between Woody Allen, Mia Farrow, and Dylan Farrow in the early 90s.

HBO is Climbing Up To Streaming Prominence

HBO has been on fire with scouting talent and producing great content. Some of their greats are ‘I’ll Be Gone in the Dark’ about Michelle McNamara and The Golden State Killer, ‘The Vow’ about the sex-trafficking and racketeering organization and cult NXIVM, and ‘The Case Against Adnan Syed’ about the murder of Hae Min Lee in Baltimore County. During an era when streaming platforms are battling for dominance, it’s refreshing that Netflix and HBO have been providing a spotlight for innocent victims of terrible crimes. They make sure the victims and the people who suffered the most from the subject of their crime docuseries get justifiable attention, rather than making the criminals near celebrity-like focal points.

Woody Allen’s contribution to Cinema is undeniable, but it’s important to stand on the side of ethics and pick up victims rather than uplift the predators. Those that have been moved or influenced by Allen’s work have been the most difficult to convince of his wrongdoings, along with convincing them to support him by continuing to watch his content. Hearing the experiences of survivors from them directly, and networks like HBO and Netflix giving them a platform has tremendously helped people at large empathize and acknowledge the wrongdoings of the icons they love, helping push forward a societal change holding powerful people who do horrible things accountable for their actions. HBO is leaning on the side of truth and justice by producing and distributing this docuseries, and thus contributing to positive social change.

‘Allen v. Farrow’ can be streamed on HBO, with new episodes coming out every Sunday. The filmmakers, crew, editors, survivors, and everyone involved in this horrifying case deserve to be applauded for their bravery and impeccable work on this docuseries. It’s engaging, yet informative, and never veers off the rails in terms of quality and pace. It’s important culturally and socially and is a great example of top-tier documentary work.

This article will be updated weekly as new episodes are released.