‘Slow Horses’: The Spies No One Talks About | A New Crime Thriller Adaptation on Apple TV+ 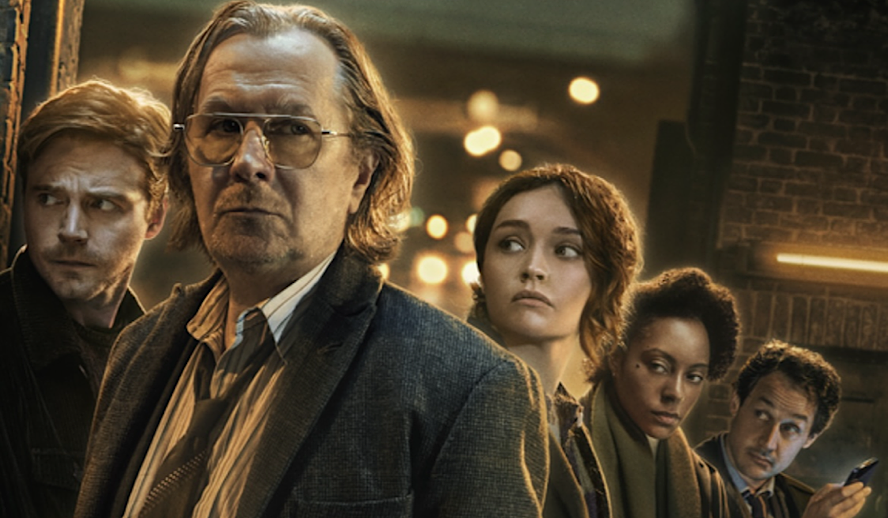 The spy thriller genre has been a staple in entertainment. From ‘Mission Impossible’ to the captivating James Bond films, they have become franchises that have impacted pop culture. With the exciting action-packed choreography, plot twisting drama, and nail-biting scenes, who doesn’t enjoy a good spy story? Those who are fans of the genre will enjoy the new series, ‘Slow Horses.’ Based on a novel written by British author Mick Herron, ‘Slow Horses’ on Apple TV+ is a new and electrifying take on the spy thriller genre.

‘Slow Horses’ is a comedic, and oftentimes absurd, British drama that separates itself from the previous spy shows due to its overall wittiness. The series released two episodes for the show’s premiere on April 1st and will have a total of 6 episodes which will all be directed by James Hawes and mostly written by British comedian, Will Smith, who is known for writing other projects such as HBO Max’s ‘Veep’ and ‘Paddington 2.’

The series opens up in an airport with MI5 agent, River Cartwright (played by Jack Lowden), surveying the crowd. In a chase to hunt down a suspect, which was a thrilling action scene of missteps and several escalators falls, Cartwright makes miscalculation after miscalculation which ultimately leads to his downfall as a highly classified agent. Cartwright is seen to be ambitious, a so-called “go-getter”, and the grandson of a legendary spy, David Cartwright, who is played by Jonathan Pryce. Despite all those things, the mistakes he made in the chase led him to be sent to the “Slough House.” The Slough House is where the lone, failed, and forgotten spies of British intelligence fall. It is a tiny and blunt office space where action-seeking agents, like Lowden’s Cartwright, are told to do the most mundane and degrading tasks.

Slough House is run by Gary Oldman’s Jackson Lamb. Lamb is an unruly and unkempt boss that treats his employees like the true failures he views them to be (but in a very sarcastic yet truthful way). Although he is seen making rude and obnoxious remarks, you can tell he cares for what he does as the series progresses. He is the good guy we were all hoping for him to be. Oldman’s depiction of Lamb is enthralling and manages to keep the dark and bleak Slough House an entertaining space.

Cartwright is amongst the group of slow horses alongside the also ambitious Sidonie ‘Sid’ (played by Olivia Cooke), the cocky yet intelligent computer expert Roddy Ho (played by Christopher Chung), and the emotionally vulnerable Catherine Standish (played by Saskia Reeves). This motley crew of unexpected spies is what differentiates itself from your typical spy story. We all slowly learn about their backstory and understand why they were put in the Slough House in the very first place.

In addition to the drama, banter, and action, ‘Slow Horses’ also recognizes a lot of British life and politics. It reflects the conservative perspectives of nationalists and politicians, who are infamously known as Tories. The show’s dynamic with the group of characters utilizes dark humor and satire in order to mock the culture of such right-wing politics (seen in a part of the first episode between Cartwright and Sid watching a speech of a conservative politician).

Though the story deals with heavy aspects of thrillers, the use of comedy is what stands out for me. It is thanks to the variety of characters and their different backgrounds that carry the story. The office dynamic between the group of slow horses is intriguing and fun to watch, especially since they work in British intelligence. The show obviously doesn’t have the high-intensity satire of typical workplace comedy shows, but they do have a comedic aspect that makes light of the terrible work conditions of the Slough House.

It is due to Oldman’s sarcastic delivery and witty one-liners that will pique your interest. Despite the field he is in, Lamb is seen to be laid back and unwavering in the work he does. His overall perspective on the job is negative most of the time, but it is enjoyable to watch as his humor is a refreshing comedic relief from the drama within the series. Oldman’s delivery of misery and sarcasm is expertly woven throughout the story that pokes fun at the misguided failing spies he works along with. To quote the sarcasm of Lamb: “Working with you has been the lowest point in a disappointing career.”

Lamb’s character is then contrasted by the idealistic Cartwright whom Lamb is seen arguing with, throughout the episodes. Cartwright is constantly challenging Lamb as his outlook on his career is opposing Lamb’s opinion of their failure as agents. This aspect of the series forces Lamb to peel back the coldhearted exterior and display his capabilities as both a leader and an agent as the story further unfolds. This then highlights the dynamic between both Cartwright and Lamb and the rest of the agents. From the very beginning, I personally enjoyed how there is a relationship already established between the people in the office from the first episode. Though it is not a very close relationship at the start, their dynamic felt solidified which can further develop throughout the course of the series.

If you are into funny action and high intense thrillers then ‘Slow Horses’ should be the first thing you watch. The series is different from your typical spy show. It is a fun and exciting series that blends both satire and dark humor while also having the needed drama. The story is filled with witty and diverse characters which makes the show so engaging to watch. By having many multifaceted characters, we are able to empathize with and also laugh at the ensemble of these ‘Slow Horses.’  New episodes will be released weekly every Friday on Apple TV+.