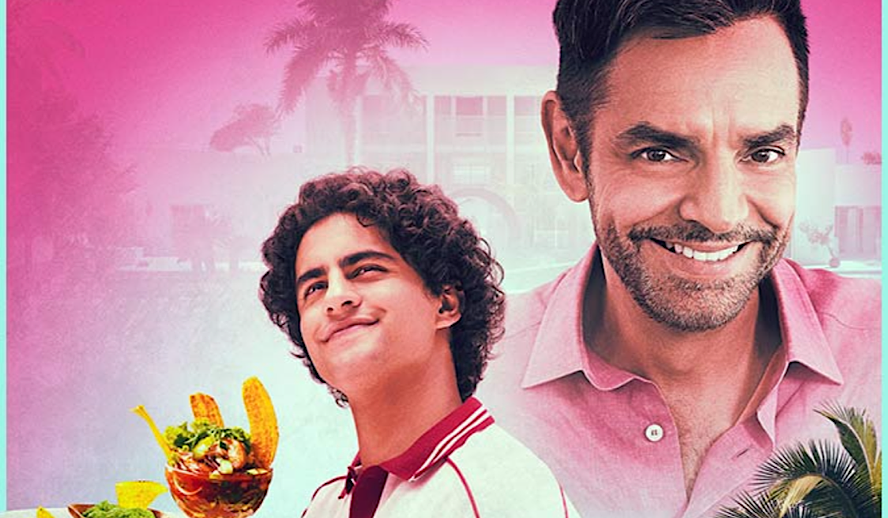 If the name of Acapulco sounds familiar, it probably is. Frank Sinatra sings about it in his hit song, ‘Come Fly With Me,’ Acapulco used to be a hot destination during Hollywood’s golden age. It has always been known as a glamorous stop for the rich and famous; although Acapulco has lost its appeal in the last twenty years (as many other Mexican destinations have become beautiful resort towns), its stories and glamour remain untouched down the Acapulco bay. ‘Acapulco’ is Apple TV’s new bilingual series, starring Eugenio Derbez, basing its background on the town’s history.

‘Acapulco’ is a heartwarming and hilarious coming of age story about a man’s innocence and insatiable ambition. ‘Acapulco’ is set in a colorful resort inside the beautiful town of Acapulco, Mexico. Maximo’s biggest dream is working at “Las Colinas,” the most glamorous resort in Acapulco Bay. The younger people in town believe, specially Maximo, “Las Colinas” is the only way for a better life, as American tourists roam its walls with tips that come in dollars. But because of the resort’s popularity among the rich and famous, celebrities like Elizabeth Taylor and many more visit often, the resort has the reputation of corrupting its employee’s innocence for the sake of bigger and better tips.

After waiting years, Maximo finally gets a chance to be a cabana boy for the resort. But his mother, Nora, heavily disagrees. Nora’s biggest fear is that Maximo’s sweet nature gets corrupted by a pair of American tourists and their dollars. Maximo quickly realizes his nature is tender, and the resort might not be the one changing him, but the other way around. Maximo’s influence will change the hotel and all the people in it for the better.

‘Acapulco’s’ premise highlights opportunity and the lack thereof, pokes fun at the American stereotypes that had followed Latin American people for years, and emphasizes family, kindness, and love. ‘Acapulco’ shares the idea that there’s good in everybody and explores the possibility of change towards a rotten person. The series focuses on portraying a positive attitude to life, and it manages to make you feel lighter as the comedy strikes tenderly more often than not. Take the series for what it is, don’t expect it to be a deep analysis of anything, rather than an entertaining and warmhearted, beautiful story.

Eugenio Derbez plays an older and more successful Maximo; his character introduces us to the story elements. Derbez has had a long-running career; his presence on TV spans over twenty years, not to mention his recent years making big-budget motion pictures. Thankfully, Derbez is not playing just the Mexican gardener, but a millionaire businessman in charge of taking us where the story leads. For me, that’s a change in the right direction. Derbez’s comedy is familiar to his Latin American public, just like an Adam Sandler original is recognized by any American in the first five minutes of the film, the Latin public can spot a Derbez original in even fewer seconds. Eugenio Derbez plays the older version of Maximo.

The cabana boy ends up more successful than he ever imagined.  At the beginning of the series, the older version of Maximo is introduced, living lavishly in an enormous house in Malibu. There, he tells his life story to his little nephew. The perspective presented to us is of Maximo’s older self. The audience is left wondering if Maximo’s perspective is factual, or if we only see older Maximo’s arranged memories. The series pokes fun at the American obsession with race, while the roles are reversed as when Maximo becomes a successful man, his butler is of an “all-white” descent.

Maximo is played by newcomer Enrique Arrizon, whose kind eyes are nothing but believable for such a sweet character. Enrique accomplishes to hit Maximo’s innocence, while his clumsy matter adds a sense of rightfulness to its character. You can help but want to help him in any moment of struggle. Maximo’s mom is played by Vanessa Bauche, who often tends to hit her characters right on the spot, and this time is no different. The mother, Nora, is not approached in a stereotypical manner, where the Mexican mother screams louder on the surface than the more profound meaningful ways a mother should be. Bacuhe delivers Maximo’s mother with naturality and as much honesty a comedy allows handling. Regina Reynoso plays Maximo’s younger sister, the rebellious and often outspoken daughter of Nora. Reynoso’s performance adds to the beauty of ‘Acapulco,’ as her relationship with Maximo highlights the roots of Maximo’s softhearted manner. The sibling connection is honest in its form, tending to make Reynoso’s character a sort of Jiminy the cricket towards Maximo’s consciousness.

‘Acapulco’ is set in the candy-colored time of the 80s, as the set design accomplishes transporting you to a nostalgic world, even if you have not been alive in the 80s. Its hinted period turns the series into a real 80s time series and not playing at one. With only two episodes, the show already allows its audiences to beg for more, as the beautiful aesthetic and innocent feeling make the storyline desirable.

Yes, Please, Give Me More Accents!

The series is told from a Spanish and English perspective. The creators found a natural way to make the transitions between languages make sense without being forced. Yes, please, give me more accents. The cast consists of actors from many backgrounds, a beautiful melting pot of accents that make total sense. ‘Acapulco’ honest approach towards culture makes you want to keep watching, smiling softly. Instead of sitting staring at the TV, criticizing everyone for their lack of understanding in culture, language, and Latin American heritage, and being annoyed for the obvious “try-hard” for inclusion. The naturality of how this show has created opportunities for Latin American and Hispanic artists is a beautiful contrast with one of the show’s themes—lack of opportunities with the lower class or, in more American terms, with minorities.

The series was created by Austin Winsberg, Eduardo Cisneros, and Jason Shuman. The Showrunners of ‘Acapulco’ are Austin Winsberg and Chris Harris, whose beautiful aesthetic world speaks of inclusion and a sense of reality. ‘Acapulco’ seems like the perfect melting pot, one that we should start to get accustomed to. ‘Acapulco’s’ remaining episodes will be streaming on Apple TV every Friday.