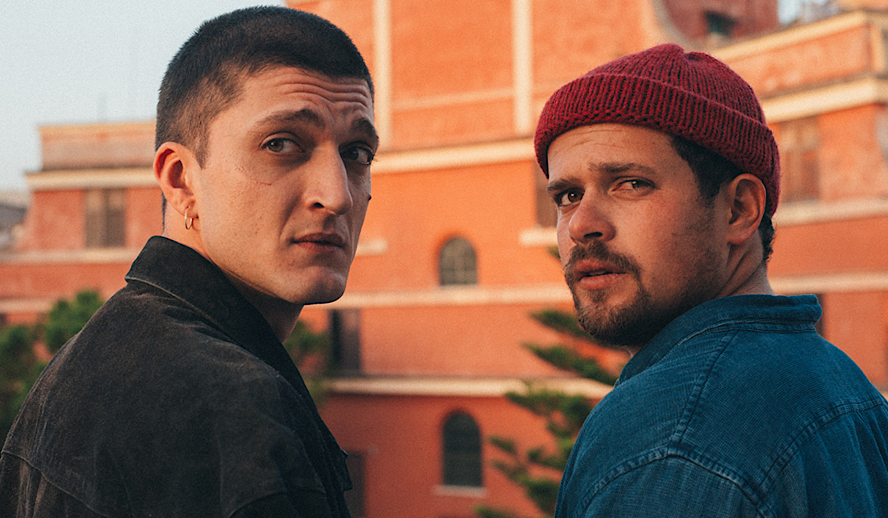 I’ve said in the past how streaming services can be useful for introducing me (and the general public as well, of course) to films I would’ve had no idea existed otherwise, be they international, independent, or simply ones that fly under the radar. I won’t repeat myself here more than I already have, but I will say that Netflix has struck again with helping me find a movie that I probably wouldn’t have given a second thought to if I simply heard about it in passing. For that, I’m thankful, as the subject of today’s review is a movie that I think is pretty worthwhile and certainly deserving of more attention.

‘The Turning Point’, a.k.a. ‘La Svolta’, is an Italian drama film distributed by Netflix. It centers around Ludovico, a comic artist who has hit a bit of a standstill in his life. He lives by himself in an unkempt apartment and is about as unsocially active as one can get. That all changes, however, when a man named Jack runs into him one night, forcing Ludovico to let him stay at his apartment. You see, Jack has stolen a large amount of money from a group of mobsters, and they haven’t taken kindly to the action at all. From there, ‘The Turning Point’ largely focuses on the relationship between the two men, as Ludovico realizes that Jack might not be as dangerous or even ill-intentioned as their initial encounter led him to believe.

One thing that really stands out about this movie for me is the story, which is surprisingly unique all things considered. Stories about things such as unlikely pairings and morally ambiguous protagonists are nothing new, but what is new is the way the ideas and plotlines are brought together and executed in this film. The apparent criminal Jack encouraging Ludovico to step out of his comfort zone and do things such as talk to the woman he’s had his eye on is a really charming concept, and the way the two start to become friends across the course of the movie feels very natural. We get a proper feel for who they are, and the script allows them to open up to each other and give themselves further depth.

To go back to the characters for a bit, it’s worth pointing out that they’re what really drives the narrative of the film, allowing it to work as well as it does. Ludovico himself is a very relatable character; the movie takes time to establish both him and his way of living before the inciting incident happens. Seeing him at such a standstill point in his life puts him in a very sympathetic light, even his lack of motivation is more or less on him. As someone who sometimes struggles with procrastination, it’s frighteningly easy to see myself in such a position. There’s a good chance I won’t be running into any criminals capable of pushing me to do better, so I can at least Ludovico as a sort of cautionary tale.

Meanwhile, Jack, who could easily have been a one-dimensional character, winds up having a decent amount of layers as the story progresses. Even during the start of the film when he forces Ludovico to let him stay, acting somewhat intrusive, he manages to avoid being unlikable. He’s never too harsh, and we can see that there’s a real character in him. Yes, there is a reason why he stole so much money from a group of dangerous mobsters, and yes, you will have to watch this film for yourself to find out why.

Another strength of this movie is the overall tone. The movie is largely serious for the most part, but there are some lighter moments scattered throughout. These never feel jarring; on the contrary, the movie’s tonal balance is perfectly natural, and it reflects how down to Earth the main character is, even in the midst of everything happening. When ‘The Turning Point’ gets dark, it does indeed get dark, but it never becomes explicit or straight-out nasty in any way. Again, the keyword here is “balance”, and balance is something this movie is very good at.

‘The Turning Point’ is also well directed; there are plenty of close-up shots that portray a sensation of claustrophobia, as well as a fair amount of handheld shots. Combined, these make the film a bit more tense than it otherwise could have been. Another noteworthy point is the lighting and color scheme. More than a few scenes are dimly lit, and the dingy look of each location gives the film a nice gritty look. Ludovico’s apartment has quite a few colors in it that pop out in the daytime, but it’s a messy enough location to get a sense of his less-than-productive way of living. Even though I don’t speak Italian, the acting from what I could tell was also solid all around.

As strange as this might sound considering everything I’ve said thus far, the manner in which the movie’s story progresses is surprisingly not as engaging as it should be. Maybe it’s the pacing, maybe it’s the directing, maybe it’s the writing, but something about the movie prevented it from thoroughly captivating me. As previously stated, there’s a lot about the story itself that I appreciate, but a number of scenes inside Ludovico’s apartment feel like they don’t progress the story as much as they should, and they throw the movie off a bit. But who knows? Perhaps this is a “me” problem; something tells me I should give this movie another shot at some point to see if I still feel the same way.

‘The Turning Point’ really surprised me. I was somewhat iffy on the trailer, as even though the premise was pretty unique, I wasn’t sure how well it would actually end up working. However, this movie is actually pretty smart. It knows how to keep the characters likable despite their flaws, and it knows how to keep the underlying suspense present throughout. Sure, a couple of scenes here and there could’ve been a little tighter, but all in all, this is a very good movie that I think more people should check out.