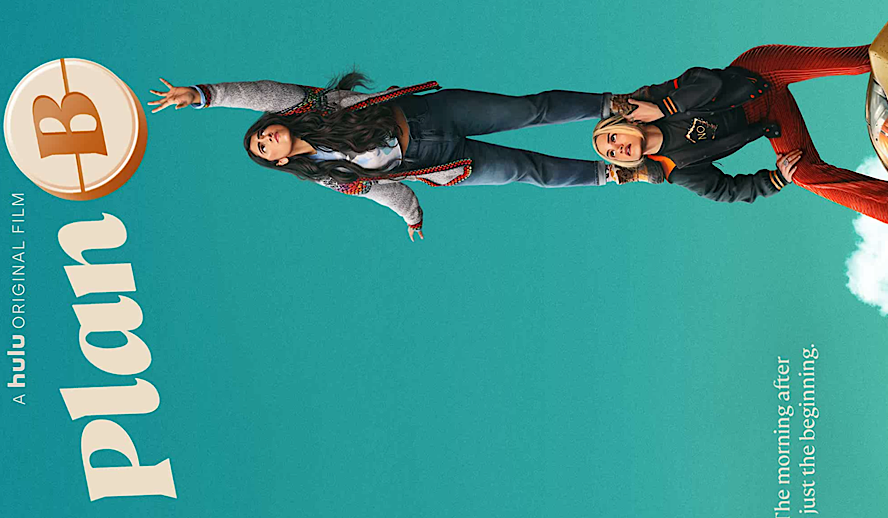 Lupe also struggles to appease her parents with her pastor father often disapproving of Lupe’s wild-child behavior and unfavorable style, often sporting her nose ring and dark sultry makeup. Lupe being the crazy and encouraging best friend that she is, throws a last-minute party at Sunny’s house whose mother is out of town in hopes to bring Sunny and her crush Hunter (Michael Provost) together. Of course, the party doesn’t go as the girls had hoped considering Hunter left with another girl. Frustrated, Sunny finds herself in her bathroom with the school’s most devout Christian, Kyle, (Mason Cook)  where she ends up losing her virginity in an incredibly terse and undesirable encounter all before Kyle runs out of the room feeling extremely guilty while announcing he needs to go pray.

Sunny then wakes up the next morning in a complete state of panic and takes her friend Lupe with her to the local pharmacy to retrieve the morning after pill only to be turned away by the pharmacist as he declines to give it to her under South Dakota’s “conscious clause” which allows pharmacists the right to refuse the distribution of emergency contraception due to their own personal moral or religious beliefs. Sunny and Lupe have no other choice but to embark on a cross-state trek to a Planned Parenthood facility in search of the pill all under 24-hours before Sunny’s mom returns home from a work conference.

While there is desperation for the two to locate a pill and make it home by a reasonable time, there are also many comedic and outrageous moments that the two girls encounter on their road trip, because it wouldn’t be a teen-comedy without every obstacle known to man being thrown their way. I assure you that there are plenty of hilarious moments as the girls navigate stolen vehicles, navigational issues, online crushes, insane drug dealers, and a few other raunchy situations that I’ll let you watch for yourself.

‘Plan B’ is about self-discovery and the familiar battle teenagers face as they want the approval of their parents but also crave independence and their own responsibility. This film sheds light on what it’s like to not always be accepted by your peers, in this case, because Sunny and Lupe live in a small town with little to no diversity, and “being yourself” usually amounts to getting made fun of. It allows audiences to watch their journey from beginning to end all in the span of just a few days where our lead characters learn not to let anyone stand in their way and to fight for what they need.

Victoria Moroles is no stranger to the screen as she has worked professionally in front of the camera over the last fifteen years, with credits under her belt such as MTV’s hit show ‘Teen Wolf’ and ‘Liv and Maddie: Cali Style’, and horror film ‘Here and Now’. ‘Plan B’ is Morales’ directorial debut, and after seeing how flawlessly she navigated this film I certainly see more directing opportunities in her near future. The hilarious script was penned by Joshua Levy and Prathi Srinivasan (‘iZombie’, ‘Bollyweird’) and produced by ‘Cobra Kai’ and ‘Blockers’ Jon Hurwitz and Hayden Schlossberg along with Ryan Bennett (‘Big Time Adolescence’, ‘The Binge’) to name a few.

I also was shocked to find out that this film was created entirely during the COVID-19 pandemic in Syracuse, New York despite being set in South Dakota. Lead actresses Kuhoo Verma and Victoria Moroles even had to have a chemistry read (when two actors/actresses audition in person with one another so producers can determine if the actors would work well together and if they subsequently have “chemistry) completely over Zoom since in-person auditions and meetings weren’t allowed at the time of casting. I believe Kuhoo Verma was an excellent choice for the role and that she delivered a stand-out performance. With only a few credits to her name, I believe this film was a great showcase of her acting abilities and will catapult her to a lot more work in the very near future.

The Importance of this Film

What I loved about this film were the two incredibly strong leading ladies. Not only was their chemistry with one another so incredibly believable but I loved seeing how authentic their struggles were and the support they had for each other when things didn’t go exactly as planned. There is something so special about women supporting each other which I felt this film really nailed head-on. It was also incredibly humbling as a young woman myself to see so many films in the past year alone, ’Unpregnant’, ‘Never Rarely Sometimes Always’, and now ‘Plan B’, that touch on the complications that young women often face regarding sexual healthcare and the uncomfortable and often difficult truths that follow an accidental or unwanted sexual encounter.

With the success of this film, talks of a sequel are already occurring. The team behind the project is open to the idea and has even pitched the idea of the two best friends in college. Perhaps titled Plan C? Only time will tell! To all the young women trying to decide what film to watch on your next night off, or truly anyone looking for a good uplifting comedy, I hope next time you find yourself scrolling through Hulu you give ‘Plan B’ a shot.