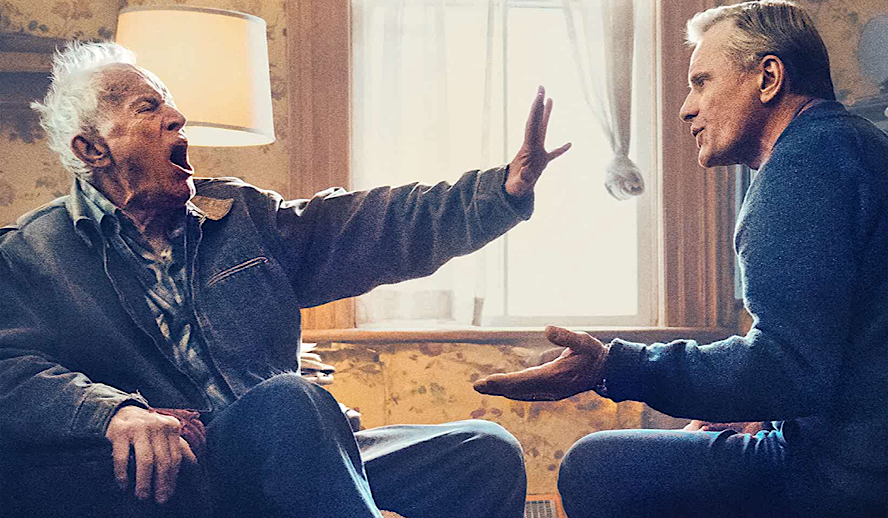 Viggo Mortensen, an actor best known for his role as Aragorn in the ‘Lord of the Rings’ trilogy, has been in the industry for over 30 years. Besides acting, Mortensen is an avid poetry lover and writer, going as far as to create his own publishing company. He has also dabbled in other fine arts and is a photographer as well as an abstract painter. Recently, he journeyed into the world of screenwriting and directing and his directorial debut, ‘Falling’, was released on February 5th, 2021.

A brilliantly crafted portrayal of dementia and the destruction it can do to families, ‘Falling’ is a hard-hitting and truthful film. The film feels like it has been made by a director with ten years of experience, not someone’s directorial debut. With this film, Mortensen makes a strong statement that he’s here to deliver powerful stories that will continue to impact the film world for many more decades.

‘Falling’ is a film written and directed by Mortensen, who chose to act in it in order to obtain funding. The film tells the story of John Peterson, a gay man who’s married with a child, and his tumultuous relationship with his conservative father (who’s living with dementia). Although ‘Falling’ is Mortensen’s directorial debut, the movie reads like it was made by a seasoned director. His level of storytelling is incredible and since the story comes from his own experience, it heightens the watcher’s experience. Mortensen is able to create dimensions in his film without drawing too much attention to his directing.

For instance, the viewer is instantly aware that Willis (Lance Henriksen) is mentally deteriorating without anyone needing to explicitly state it. In one of the first scenes, we see Henriksen locked inside of a plane’s restroom. Suddenly, it cuts back to a yellow, warm, scene of Henriksen in his old bathroom with his wife calling his name. We’re only given a glimpse of this past before we cut right back to the dingy, cramped restroom that Henriksen is actually in.

One of the best parts about ‘Falling’ is its portrayal of dementia in a visual way. The constant switching between the present and past is clear-cut, but transitions in a way that seems effortless. Coloration is a main factor of this, clearly differentiating between the past (warmer colors like yellow) and the present (colder colors like blue). As well as that, it helps the viewer understand this disease better without trying to throw information at us. Subtle things trigger Henriksen’s character’s dementia. At one point, Mortensen pours him a glass of water and the water brings Henriksen back to a creek on a wintery day. Another time, we’re in Henriksen’s point of view as we stare at Mortensen, and the scenery changes behind him from the modern kitchen to the one Henriksen remembers over twenty years ago. It’s little things that help indicate when Henriksen is struggling with his memory, a credit to Mortensen’s directing skills.

A unique factor of ‘Falling’ is its seamless transitions between the perspectives of Mortensen and Henriksen. The generational gap is obvious from the get-go, but becomes more and more apparent as the film goes on. In one scene, Mortensen and Henriksen are sitting in the kitchen and there’s a lighter mood here than in previous scenes. Henriksen’s character seems sharper and more aware of what’s going on. However, the good moment is short-lived when Henriksen sees the Barack Obama sticker on Mortensen’s fridge. “You voted for that negro?” Henriksen remarks and the mood instantly changes.

Mortensen sighs and doesn’t even try to argue back as he cooly responds. This interaction between the characters makes it seem familiar, as if Mortensen is used to his father’s conservative ideals and opinions. As the conversation continues on, Henriksen’s character uses crude language that is unacceptable today including using the “f” slur. Mortensen straightens up and puts his hands protectively in front of him as he faces his father. It’s an interesting scene with multiple layers to it.

For instance, Mortensen is standing while his father is sitting down. Generally in blocking terms, the person standing has more power over the character sitting. In this instance, though, Henriksen is asserting more dominance than his son is. Mortensen is on the defensive and neatly deflects any cruel comments with shrugs or short answers. At one point, Mortensen tries to change the topic of conversation, but Henriksen’s character continues on, unaware of any emotional damage he’s inflicting.

The entire film is a power struggle, both between Henriksen and Mortensen and Henriksen and his own mind. Henriksen is living in the past, both culturally and mentally, while Mortensen represents the present. Using dementia as a device in order to tell this LGBTQ+ story is interesting and rarely do stories about these types of issues get made.

Beauty in the Details

‘Falling’ doesn’t shy away from gritty details or hard-hitting, crude language in order to tell its tale. Also, unlike other dramas it doesn’t overuse crying and tears in order to convey its emotionality. Mortensen utilizes smaller, more subdued facial expressions in contrast to Henriksen’s consistent raising of his voice. While Henriksen yells a lot, Mortensen rarely rises to the bait. Instead, he faces every conversation with a resigned attitude, torn between his love for his own blood and his hatred for his father’s willing ignorance.

In this movie, Mortensen’s acting is constrained, until he finally blows up. The climax of the story occurs when Mortensen finally lashes out and verbally attacks his father, reprimanding him for everything he’s said and how ungrateful he’s been. It’s a moment that is a long time coming and the payoff feels fulfilling, partly because of Mortensen’s writing and partly because of his precise escalations. Both Mortensen and Henriksen are veteran actors and this film allows them to showcase their skills. While the story may seem simple at first, Henriksen’s experience allows him to bring the work to another level.

‘Falling’ tells a well-contained story, clearly crafted with Mortensen’s level of perfection that he attaches to his acting work. Truly, ‘Falling’ is a beautiful, personal story that is brought to life by its writer’s acting skills and highlights Mortensen’s directing prowess.

‘Falling’ is available to stream on Google Play, Amazon Prime Video, and Vudu.