‘Girls5eva’ is the Nostalgia Comedy of the Year 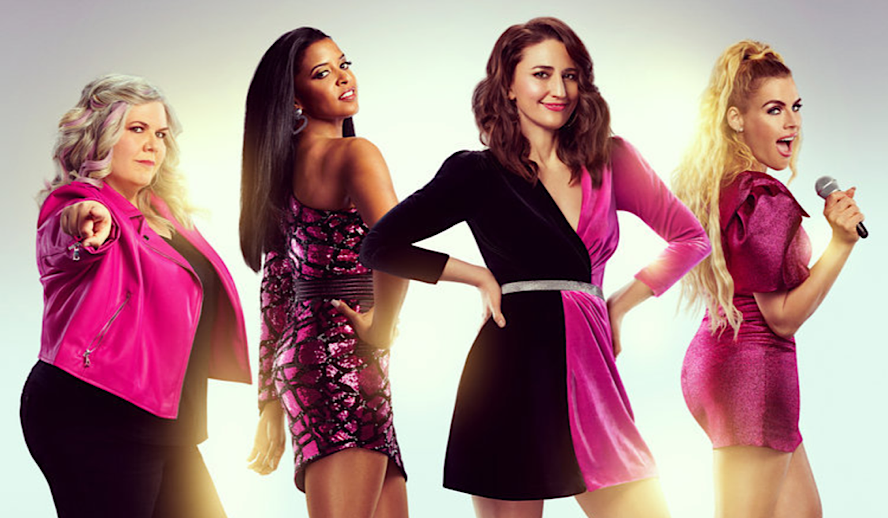 The 1990s was a ripe time for the boy band and the girl group, with groups such as Backstreet Boys, NSYNC, Boyz II Men, TLC, En Vogue, and Spice Girls being at peak popularity during that time. Much like everything in life, all good things must come to an end and most of these groups saw their success dwindle and come to a close in the early 2000s and all their members went their separate ways. In recent years some of these groups have tried to regain their 1990s success and do a reunion in today’s times which is the inspiration for Peacock’s new hidden gem ‘Girls5eva’.

‘Girls5eva’ follows Dawn (Sara Bareilles), Wickie (Renée Elise Goldsberry), Summer (Busy Philipps), and Gloria (Paula Pell) who are all members of the 1990s girl group Girls5eva who decide to try and become a successful group again after a young rapper samples their biggest hit in his new song. Over the eight-episode first season, the four middle-aged women discover that reclaiming their fame is much harder now in their 40s than it was when they were teens. While most of the show does take place in present-day there are flashbacks to their early days and old music videos from when they were a group of five (with ‘Emily in Paris’ actress Ashley Park playing the fifth member who is revealed early on to have died in a very strange accident and Broadway actress Erika Henningsen playing a young Gloria).

The show was created by Meredith Scardino who also is the brain behind ‘The Unbreakable Kimmy Schmidt’ and is produced by Jeff Richmond (who also wrote all but one of the 31 original songs in the show) and Tina Fey (who also makes a cameo as a surprise celebrity who you would least expect her to impersonate). When talking about creating the show and walking the line between real-life girl groups and parody with Pitchfork, Scardino said, “It’s sort of on its way to parody. It’s a competitive world. I liked the idea of playing with: Okay, they’re this girl group.

And on the outside, it looks a lot like girl power and empowerment, and they might feel like they’re controlling the world. But really, they were very manmade, and they had no control, and they were teenagers, so they didn’t know any better. They were a bunch of strangers thrown together, and they became best friends, and it was a blip, and then it went away as fast as it came. I have tremendous respect for every person who went through that process and came out the other side. But I think you can find jokes while you appreciate and respect people.”

‘Girls5eva’ And 1990s Nostalgia (And The Problems That Come With It)

The thing ‘Girls5eva’ does best is using nostalgia for the sake of humor. A large part of the show looks at the culture of the 1990s and how problematic the treatment of women and the songs they sang were. Their former manager repeatedly mentions the “mandatory sensitivity training” he had to take because of his predatory behavior and the women are constantly looking back on their old songs and how problematic and sexist their lyrics were (such as “Dream Girlfriend”). Critiquing 1990s pop culture is nothing new, especially with the current rise in documentaries surrounding popular figures from then such as ‘Framing Britney Spears’ and ‘Kid 90’, but ‘Girls5eva’ takes what those documentaries and think pieces show and turns it into satire in a way that works so well.

The show does use several of the stereotypes that follow 1990s girl groups and boy bands: there is the chill and creative base of the group (Dawn), the airhead and future reality TV star (Summer), the one who spent their time in the group closeted because being gay in the 1990s was taboo but has since come out (Gloria), and the one who left the group to go solo (Wickie). But the other thing the show does so well is display how these women are more than the stereotypes placed upon them by society and the media and that they can be whoever they want to be and be their unabashed selves, a feeling they turn into their original song (written by Sara Bareilles for the show) to show their growth to the world.

The performances from all four of the main actresses are absolutely hilarious. This provides another chance for Paula Pell to continue to show what a gifted comedic actress she is as the former girl group member-turned-dentist and a part of the first gay couple to get divorced in the state of New York (continuing her track record from fellow Peacock show ‘A.P. Bio’). ‘Girls5eva’ also marks a return to acting for Busy Philipps in her performance a funny and at times heartbreaking wannabe ‘Real Housewife’ dealing with returning to the girl group, her influencer teen daughter, and her former boy-bander husband who lives in Tampa and only visits on the 31st of every month with a 31st day (played by Andrew Rannells).

Renée Elise Goldsberry shines as a Beyoncé-esque character and gets so many chances to show off what an incredible voice she has. Sara Bareilles is the biggest revelation here since, while she has acted on Broadway before in her show ‘Waitress’, is not very well known for acting but turns in a very funny performance as the anchor for the show.

As someone who is a fan of just about every actress in this show and of Scardino’s previous work, I was very curious to see where this show would go. I found myself several times laughing out loud at some of the one-liners and songs and even added several of the songs to my own playlists (the theme song alone will be stuck in your head for days on end just after one listen). If you are a fan of Tina Fey and Meredith Scardino’s previous works, are a fan of 1990s or Y2K girl groups, or both, then you will like this show. They sing “Gonna be famous 5eva/’Cause forever’s too short” and that sentiment is true; hopefully this show will last at least forever because it is far too funny not to last for a while.

All episodes of ‘Girls5eva’ are currently streaming on Peacock.